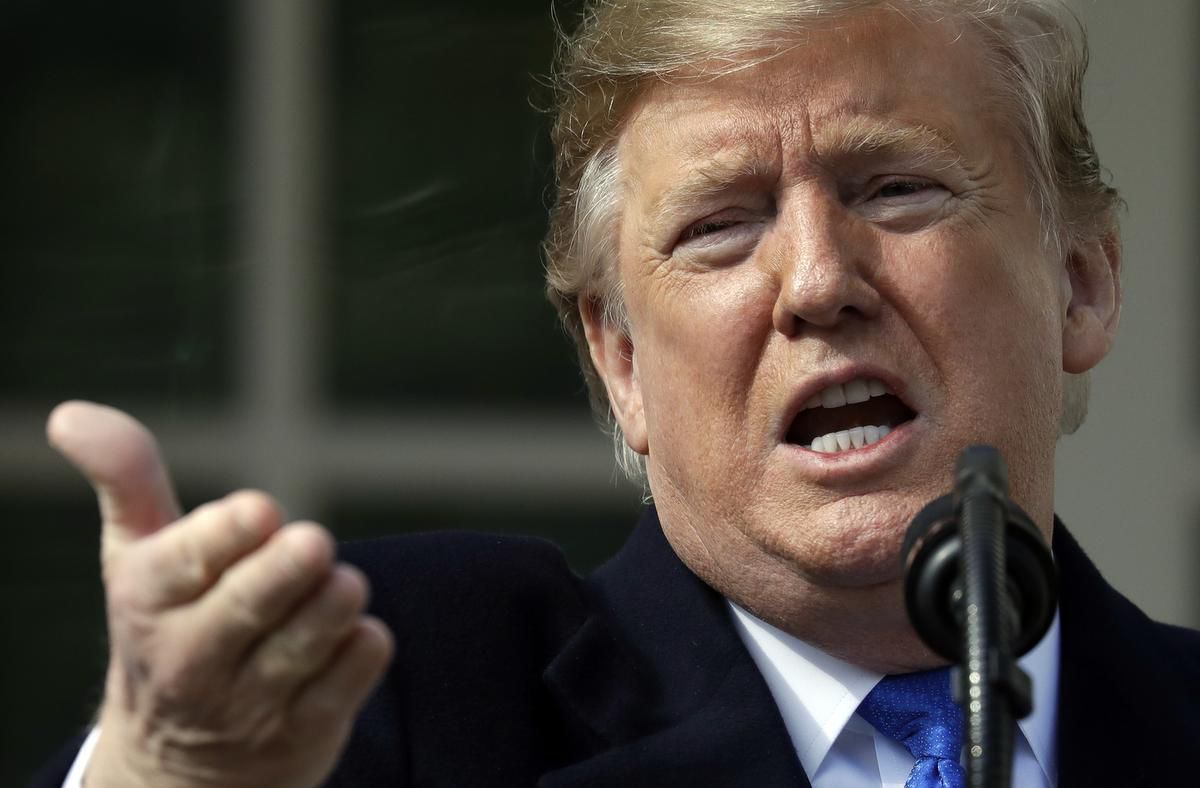 WASHINGTON—He boasted that he was nominated for a Nobel Peace Prize, then complained that he wouldn’t win.

He contradicted his chief trade negotiator on negotiations with China. He promoted North Korea as an ideal location for economic development. He uttered a series of lies and misleading statements about immigration, saying it was everyone else who was lying.

And he said he didn’t actually need to declare the national emergency he was speaking in the Rose Garden to declare.

In a rambling, defensive and thoroughly bizarre appearance on the White House grounds on Friday, U.S. President Donald Trump made an unfocused stream-of-consciousness case for his immigration emergency while also musing at length about a variety of related and unrelated topics.

In arguably the strangest moment of the morning, he appeared to undermine his case that an emergency is necessary.

“I could do the wall over a longer period of time. I didn’t need to do this. But I’d rather do it much faster,” he said. He repeated: “I just want to get it done faster.”

“Mr. President, how can this possibly be an national emergency if you’re saying you don’t need to do it? Unreal,” Democratic Senate leader Chuck Schumer said on Twitter.

Trump also signed into law on Friday a spending deal reached by Democrats and Republicans to fund security initiatives on the Mexican border. Trump was dissatisfied with the deal because it included less than $1.5 billion for about 55 miles of border barriers, much less than the $5.7 billion and 234 miles he had demanded for the giant wall he had repeatedly promised Mexico would pay for.

Trump is seeking to use the emergency declaration to seize money Congress had allocated to other areas of government and use it for the wall. The New York Times reported Friday that his team is looking at taking $3.6 billion budgeted for military construction, $2.5 billion from anti-drug projects and $600 million from an asset forfeiture fund.

Though presidents have broad authority to declare emergencies, there has never been an emergency declared so a president could pay for his controversial initiative with money not approved by Congress for that purpose.

Democrats and some Republicans have called Trump’s plan an unconstitutional abuse of power. Trump suggested there was a double standard for him, saying that “nobody cares” when other presidents declare emergencies.

And he dismissed concerns about his plan to grab money that had been allocated to the military.

Trump said it would be easy to win the court challenge that is almost certain to be filed, since he is declaring the emergency over a “virtual invasion” of drugs, gangs and human traffickers.

But he also said he thought he might well lose in the initial case, then again on appeal. Speaking in a singsong voice as he offered a series of unusual predictions about the next steps in the case, he said it was only at the Supreme Court where he hoped to get a “fair shake.”

The state of California and independent organizations have said they plan to sue.

“President Trump is manufacturing a crisis and declaring a made-up ‘national emergency’ in order to seize power. This ‘emergency’ is a national disgrace — and the blame lays solely at the feet of the president. Our message to the White House is simple: CA will see you in court,” Democratic California Gov. Gavin Newsom said on Twitter.

As at previous immigration speeches, Trump invited the mothers of people killed by unauthorized immigrants, known as “angel moms,” to attend this one. When he was asked to respond to critics who say he is manufacturing this supposed crisis, he turned to the women and said, “What do you think? You think I’m creating something? Ask these incredible women.”

Rejecting his own government’s conclusion that most drugs that come in through Mexico are smuggled through legal ports of entry rather than unwalled desert, he declared that this was “all a lie.”

Rejecting official data that shows the number of apprehensions at the southwest border is less than a third what it was two decades ago, Trump said, “We have far more people trying to get into our country today than probably we have ever had before.”

And rejecting human trafficking experts who have said that a large percentage of victims come through legal ports of entry, Trump said that this is impossible, since border officers would notice “three women with tape on their mouth.” Experts say victims are usually tricked or coerced into crossing, not physically restrained.

Trump himself was critical of Democratic predecessor Barack Obama for bypassing Congress with unilateral action on immigration, tweeting in 2014: “Repubs must not allow Pres Obama to subvert the Constitution of the US for his own benefit & because he is unable to negotiate w/ Congress.”

Asked about this on Friday, Trump said the current situation is different — because he is taking unilateral action after making an inadequate deal with Congress, not after making no deal.

Amber Alert mobile system working despite glitches, but could be tweaked, experts say