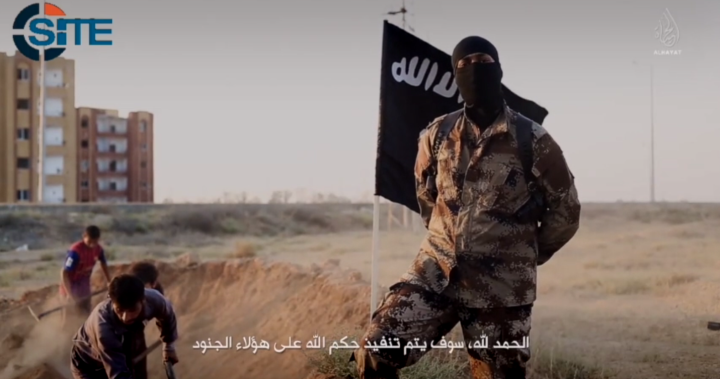 A Canadian captured in northern Syria last month has admitted he helped produce ISIS propaganda videos that showed prisoners digging their own graves and being executed, according to a local source.

Mohammed Abdullah Mohammed, who was detained by the U.S.-backed Syrian Democratic Forces on Jan. 13, acknowledged his role in the ISIS videos Flames of War and Flames of War 2, the Rojava Information Centre said.

“Our sources in YPG confirmed that he is the narrator of both FoW [Flames of War] videos,” the group said. The YPG is the Kurdish militia that dominates the SDF alliance fighting ISIS.

The group said he had acknowledged writing the scripts but that it could not yet confirm it’s his voice heard reading them in the videos, although that now seems likely.

Shortly after Mohammed was caught in the last patch of ISIS territory, Global News reported he seemed to be the long-sought Canadian narrator of the videos and many of the terror group’s other releases.

His alleged admission came as the government is under pressure to take back and prosecute captured Canadian ISIS members, and the RCMP is struggling to collect enough evidence to charge them.

The U.S. State Department has asked countries to repatriate and put captured ISIS members on trial. A lobby group for the families of those in detention, Families Against Violent Extremism, said 29 Canadians were being held in Kurdish camps and prisons, and two more were still attempting to surrender.

They include women who had married ISIS foreign fighters, and their children, but also several self-admitted foreign terrorist fighters from Toronto and Montreal like Mohammed.

In the English-language Flames of War video, the narrator praised jihadist foreign fighters who had come to Syria from around the world and said they were “chosen by Allah.”

During a scene that showed the mass execution of prisoners lying face-down, he said ISIS was “harsh against the kuffar [non-believers]. This harshness never wavered and was a constant trait of the brothers.”

The 55-minute video ended with a row of kneeling prisoners being shot in the back of the head and tumbling forward into the mass grave they have just dug with shovels.

The same narrator’s voice can be heard in the 2017 video Flames of War 2, which similarly showed prisoners digging their own graves and ends with their execution. The same voice appears to have claimed responsibility for the November 2015 terrorist attacks in Paris that killed 130.

But his identity remained a mystery until a captured Canadian ISIS fighter, Muhammad Ali, identified him to Global News last October as an Ontario man who went by Abu Ridwan.

Last month, as Kurdish fighters closed in on the last area of ISIS-held territory, they detained Mohammed Abdullah Mohammed, who told his captors he was a former student at Toronto’s Ryerson University who had joined ISIS in 2013.

The RCMP has been investigating Mohammed, who surrendered following a firefight, but he has not been charged. It’s unclear what weight his admission to his captors could have as evidence in court.

The Canadian open source intelligence group iBrabo has located the site of the mass execution shown at the end of the first Flames of War video and suggested the RCMP treat it as a crime scene for evidence purposes.

A former senior Canadian Security Intelligence Service official, Andrew Ellis, said in a 2016 speech at the Royal Canadian Military Institute that “many” Canadians were active in the ISIS propaganda wing.

“I would argue that that may be equally as dangerous, maybe more, than someone who is joining the military wing. A lot of these young Western adherents to Daesh are put on the frontlines and die very quickly.