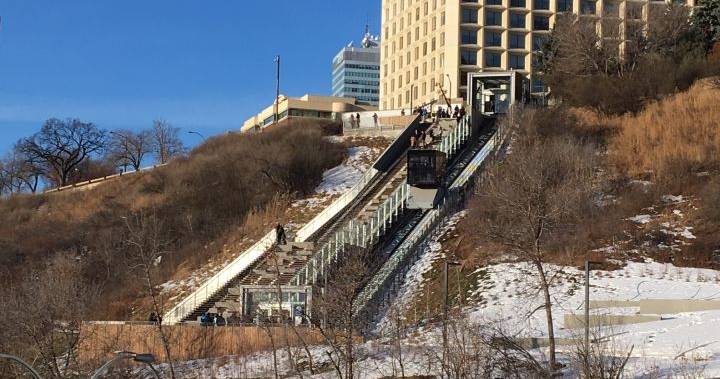 The river valley funicular proved a “popular destination” in its first year of operation, according to a City of Edmonton report.

But it also faced a number of challenges.

“As of Nov. 25, 2018, the funicular had made 114,038 trips, either up or down the track,” reads a report from the city’s citizen services and community and recreation facilities departments. “During point counts, staff recorded as many as 135 passengers using the funicular in an hour and as many as 28 trips in an hour.”

The report looked at who uses the funicular and found 22 per cent of its users ride it as part of their commute to work. Thirty-one percent of the funicular’s users take it to access the North Saskatchewan River valley.

The funicular, the top of which is located at 100 Street north of the river valley, opened to the public in December 2017. The project cost $24 million and received funding from all three levels of government as well as the River Valley Alliance.

Watch below: (From Dec. 9, 2017) There is now a new way for Edmontonians to experience the biggest green space in the city. The river valley has its very own funicular, which officially opened to the public on Saturday. Julia Wong has more.

The report said it “has increased access to the river valley for Edmontonians and visitors and has created a landmark and connection between downtown
and the river valley. ”

While the report spelled out the transport method’s successes, it also highlighted ongoing challenges, including misuse of its emergency stop button, door malfunctions and system failures.

In total, the funicular experienced 116 system failures in its first year and experienced an emergency stop 322 times. There were 112 instances of door, wind or overload issues and 15 elevator emergencies. The site experienced one emergency over its first 12 months, however, the report did not elaborate on what that entailed.

Watch below: (From August 2018) Broken glass and graffiti could be spotted at Edmonton’s funicular recently and some of the damage has been there for moths. As Fletcher Kent reports, some people want the city to do a better job of cleaning up after vandals.

“Staff responded to approximately 550 alarms during the funicular’s first year of operation,” the report reads. “It should be noted that this location experienced the second highest number of alarms reported for the City of Edmonton in 2018.”

According to the review, over 57 per cent of alarms were a result of the funicular’s users pressing pressing the emergency stop button.

“These incidents resulted in temporary stoppages until the system was reset,” the report says. Of the door, wind or overloading issues, the report found that the majority of those related to door problems, often tied to ice and snow buildup and sensor problems.

“During the first year, the total operating cost for the funicular and site was $716,468, or three per cent of the total project cost,” the report reads. “As this infrastructure remains new to Edmonton, it is expected that there will be some fluctuations in the annual operating costs.

“A three-year comparison will be required to confirm long term operating costs.”

The lion’s share of the funicular’s costs in its first year were tied to “preventative maintenance and daily start-up.” That represented over $345,000 of the money spent. The second-leading cost associated with the mechanized river access infrastructure was “non-emergency breakdown response and repair,” at over $112,000.

The city has taken efforts to enhance the funicular over the past two months. Some of the steps taken included installing a “heating loop” in the door sill to stop ice from forming at the lower doors, installing a glass roof over the lower doors to reduce issues caused by winter weather and installing markers at the staircase for people with visual impairments.

The report says that in its second year, the funicular’s operational efficiency will continue to be assessed and processes will be improved while community engagement about the infrastructure will continue.

Watch below: (From Dec. 20, 2017) It’s Edmonton’s newest attraction and now, a song about the river valley funicular could become the city’s latest viral video. ‘Fun Funicular’ has received thousands of views on Facebook since it was posted a few days ago.