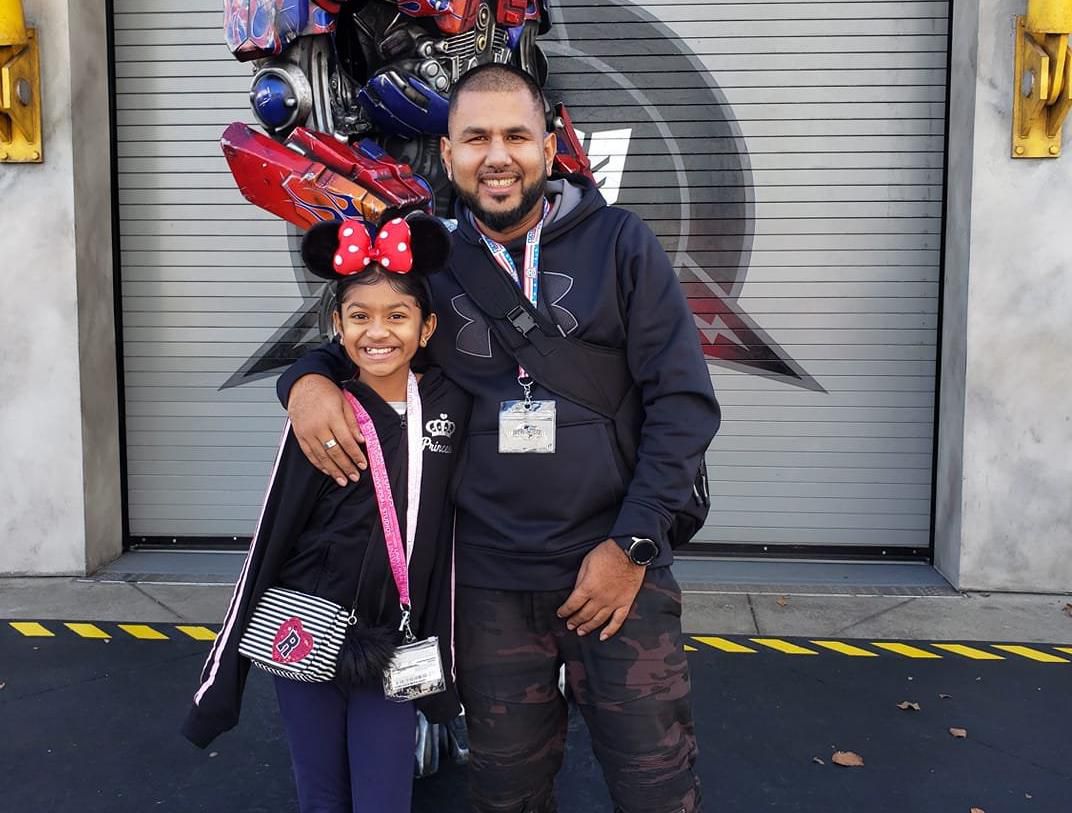 An eleven-year-old girl is dead, and her father facing a charge of first degree murder, in a case that has shaken the region.

Riya Rajkumar was supposed to be celebrating her birthday, but, instead, became the subject of a late-night Amber Alert on Thursday night.

She was found in her father’s home in Brampton on Hansen Rd. N., near Marshall Dr., hours after she vanished while in the care of 41-year-old Roopesh Rajkumar.

In front of the brown brick duplex, Friday, pink and white balloons blew in the wind, tied to a tree in front of the home, next to a growing pile of flowers and a bright pink teddy bear.

“Riya was like the princess of the family,” Roopesh’s cousin Ryan Ashadalli told reporters outside the home.

“She was just full of positive energy. She always had a smile wherever she went, he said, adding she had just returned from a vacation at Disneyland.

Officers had to force their way into her father’s home around 11 p.m. Thursday evening. Rajkumar was arrested by Orillia OPP shortly after midnight, almost 130 km. away. He was suffering from a “medical issue,” Const. Danny Marttini told reporters outside Peel Police 22 division.

The birthdays of the girl and her mother fell on the Thursday.

“It’s very heart-wrenching,” said Marttini, who added that, in the final analysis, there’s a mother “moving forward without her daughter.”

Meadowvale Village Public School posted a statement on its website saying “this tragedy has brought tremendous sadness to the students and staff” and that grief counsellors will be at the school for as long as needed.

“Riya was a well-liked student, and her death is deeply felt by everyone at the school,” the statement read. “Even students who did not personally know Riya will also be affected by this tragedy.”

Rajkumar was taken into police custody shortly after midnight. He was taken to a hospital and then a trauma centre.

Police have charged him with first-degree murder in the death of his daughter.

The girl did not live with her father on a full-time basis, police said, but was dropped off at a Mississauga gas station at about 3 p.m.

“In a tragic situation like this, when your daughter goes to spend her birthday, especially on Valentine’s Day, with her father and you expect your child to come home, my heart aches for this family,” Const. Akhil Mooken told reporters shortly after the body was found.

“As a parent, I can’t even begin to imagine what the mom is going through, and it’s something that we never want to be involved in, but it’s a terrible situation.”

Police said Riya’s mother called the authorities when the pair did not return at 6:30 p.m., and reported that Rajkumar made comments indicating he could cause harm to himself and his daughter.

“That obviously set off alarms,” Marttini told reporters earlier. “It was of extreme concern, which is why she attended the division, saying ‘I’ve got that information and I’m concerned for the well-being of my daughter.’ ”

After police took measures such as searching where the two were last seen, pinpointing the location of the father’s cell phone and checking areas they were known to frequent, they asked for an Amber Alert to be issued.

Police visited the father’s home at around 7 p.m., but did not receive a response when they knocked on the door. At about 11 p.m., Marttini said, police forced entry into the house and found the girl’s body.

“At that point in the investigation, we had received enough information that they felt that the 11-year-old girl would, in fact, be in the residence and was in need of assistance,” Marttini said. “So, with that threat to somebody’s life, they were able to force entry.”

Asked how long the girl had been dead before police found her, Marttini said she didn’t have the exact timeline, and more will come out after the postmortem.

Peel police had requested an Amber Alert to be issued by OPP earlier in the evening, but the notification was not sent until after 11 p.m., Marttini said in a phone interview. She could not confirm what time they submitted the form.

A tip from the public, following the alert, led to Rajkumar’s arrest shortly after midnight by OPP near Orillia.

The brown brick house on Hansen Rd. N. was blocked off with police tape Friday morning, as was the side street, Crawford Dr.

Residents of the quiet residential neighbourhood were shocked.

Emmanuel Okafor saw the Amber Alert on TV late Thursday night and said he was praying it would have a positive ending.

“It’s unimaginable,” said Okafor, who didn’t know the family, but has a 6-year-old daughter of his own.

“No parent should ever have to bury their kid.”

Mississauga Mayor Bonnie Crombie tweeted that “there are absolutely no words to explain the senseless and tragic loss of young innocent Riya.

“As a mother of three, this makes me sick to my stomach. My heart grieves for the mother and family,” Crombie tweeted.

With files from Marjan Asadullah, Ilya Banares and the Brampton Guardian