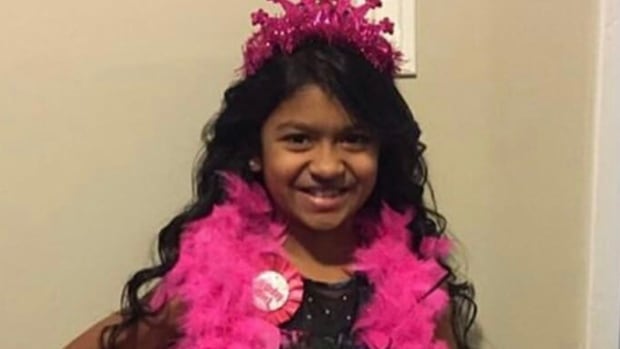 Community members left grief-stricken by the death of an 11-year-old Brampton, Ont., girl gathered at a park near the child’s school to light candles, lay flowers and show support for the girl’s family at a vigil Saturday evening.

About 200 people gathered at Meadowvale Village Green park in neighbouring Mississauga at 6 p.m., most of them holding candles to place at a growing memorial for Riya Rajkumar, who was found dead in her father’s basement apartment on her birthday this week.

Some of Riya’s family members attended the vigil, but did not address the crowd.

The group held a moment of silence and, as more people arrived and the sky grew darker, the display of candles grew in front of a pile of flowers and teddy bears.

A woman who knows Riya’s mother planned the candlelight vigil. Amrita Naipaul posted details about the event on her social media accounts. 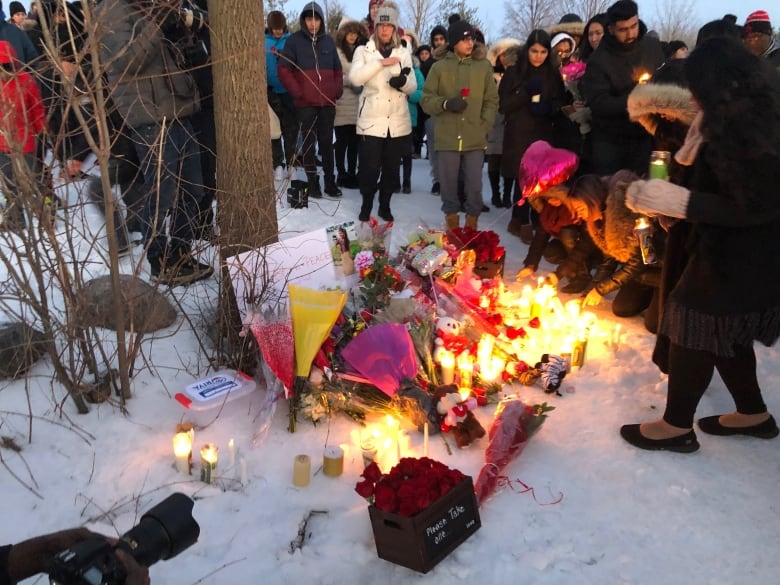 Members of the community gather at a candlelight vigil in Mississauga on Saturday night for Riya Rajkumar. (Natalie Nanowski/CBC)

« Many people have messaged asking how you can help Riya’s family during this tragic time. As a community, this loss has been felt by all, » she wrote on Instagram and Facebook.

« There are so many people who have been hurting from this angel’s loss, and no one needs our prayer and love more than Riya’s family at this time, » she continued.

In an interview on Saturday before the vigil, Naipaul said she spoke briefly with Riya’s mother on the phone on Friday evening.

« I just wanted to make sure out of respect that she was aware of what we were trying to do before we made any arrangements or made any plans, » she told CBC News Network.

« She’s actually the one who suggested that we do it nearby the school, » Naipaul explained, referring to Meadowvale Village Public School, where Riya was a Grade 5 student.

Naipaul said she has heard from people across Canada, and even from some who live outside the country.

« There have been many strangers who’ve reached out to me and said, ‘If you get a chance to talk to [Riya’s mother] just let her know that she’s very loved, and she has so much support,' » she continued.

Naipaul planned to collect donations at the vigil that will be used to help pay for Riya’s funeral. A separate online fund established by the group Neighbourhood Watch Brampton has already raised some $21,000 for Riya’s family.

« I think everybody kind of shares the same sentiment that a child is so innocent and so pure, and a parent is supposed to — especially a father — is supposed to be protective of their child. And to think about what that child went through is just hard for everyone, » she said.

Rajkumar will also be remembered at a formal memorial on Tuesday night in Brampton, the city about 30 kilometres northwest of Toronto.

Brampton Coun. Rowena Santos is helping to organize the vigil, which is set to take place at Garden Square from 5:45 p.m. to 7 p.m. ET.

« Our community is grieving the tragic death of Riya Rajkumar and this is a time to come together in solidarity and remember and honour a young life, » said a notice posted to the city’s website.

« All members of the public are welcome to attend. »

Riya’s father, Roopesh Rajkumar, is facing a charge of first-degree murder in her death. Rajkumar, 41, picked his daughter up at a Mississauga gas station on Thursday afternoon to take her out for her birthday. When he did not return the young girl to her mother at an agreed upon time later that evening, she went to Peel Regional Police for help.

An Amber Alert was eventually issued around 11 p.m. that night, and was cancelled about an hour later after officers found Riya’s body at an address in Brampton where her father resided.

Rajkumar was arrested by provincial police around the same time while driving north on Highway 11 in Orillia, about 130 kilometres north of Brampton.

Riya was remembered by her classmates and friends as having a vibrant personality and infectious smile.

On Saturday, people continued to stop by the address where Riya was found. The residence is still taped off by police, and officers were going door to door in the area speaking with neighbours.

‘No child deserves this’

A small memorial of flowers and notes of condolences grew in a snowbank outside the home. Family members brought those flowers to Saturday night’s vigil.

« It’s just so sad to hear — an 11-year-old. It could have been my daughter, » said Alexandra Casanova, who brought her children with her so that they could « understand what happened. »

Michael Bettencourt brought his adolescent son with him to pay his respects.

« We are mourning her loss. She was such a young child, and we feel for the family and the community, » he said.

« No child deserves this. »

Some UBC Okanagan students flooded out of homes