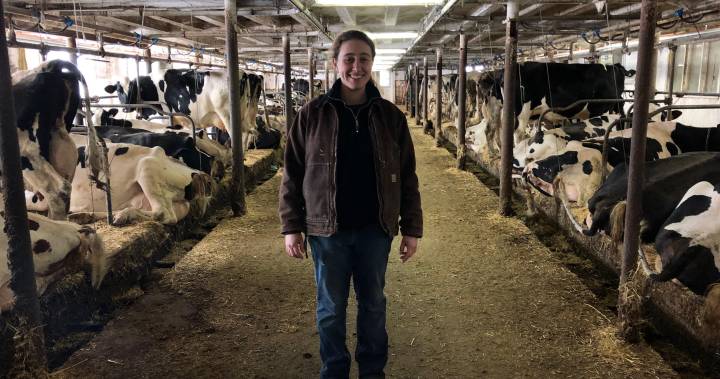 Saturday morning while most people are still sound asleep, 24-year-old Sylvia Mann is tending to the cows on a farm about an hour south of Montreal in Saint-Chrysostome, Quebec.

She has been working at the farm for three years. Five days a week, she’s there at 6:30 a.m. to milk cows and feed the calves. She then returns in the evening to do the same thing. She also has a full time construction job.

“During the summer, I work construction for 10 hours, and then I do another 2 hours here. So it’s 12 hour days,” Mann told Global News.

She studied farm management and technology at McGill’s Macdonald Campus and dreams of starting her own farm in rural Quebec.

“I would like to start a goat farm! We’ll see what happens,” she explained.

These days, Mann feels like that dream has been shattered.

“I’m nervous, anxious, angry, all the human emotions all at once. It’s not the end of your life but it almost feels like it,” Mann said.

Originally from Long Island, New York, Mann has been in Quebec since she was 18. She applied for residency last year and has been working hard to learn French.

“I’ve been working with a lot of French guys. When I first started, my French was mediocre but now it’s better. I know my accent is funny, but my boss understands me and I understand him`,” she said.

Last week, Mann became one of the 18,000 people whose immigration application was cancelled after the CAQ tabled its new immigration bill. 3,700 of those applicants reside in Quebec, including Mann.

“My life is here. My boyfriend is here. I love him so I want to be with him and I know he loves me, so I’m not sure what the next step is,” she said.

Mann is a skilled worker, working in the regions in an industry that has trouble finding labour, according to farm owner Mathieu Vincent.

For her part, Mann has started to look for jobs in upstate New York, where her family now lives.

“I’ve been starting to search for jobs in New York, but there aren’t too many farms hiring these days. There’s a different economy there. I’m not sure where I’d work, what I’d do, where I’d live,” she said.

Mann says her post-grad work permit expires in May. Without a Quebec selection certificate, she cannot get a new one.

She worries time will run out.

“The federal government will not have a basis to extend her work permit unless she gets a Quebec Selection Certification (CSQ),” said Neil Drabkin, a Montreal immigration lawyer.

READ MORE: ‘Tinder of immigration’: Quebec outlines plan for how to welcome newcomers

Mann may be able to apply under the new CAQ program that aims to match workers with employers in what immigration minister Simon Jolin-Barrette described as a Tinder-like system. Drabkin says that process takes six months, whereas Mann’s work permit expires in three.

If her application can’t be fast-tracked, Mann fears she may have to walk away from her dreams.

‘You can smell crude in the air’: Train carrying oil derails near western Manitoba village