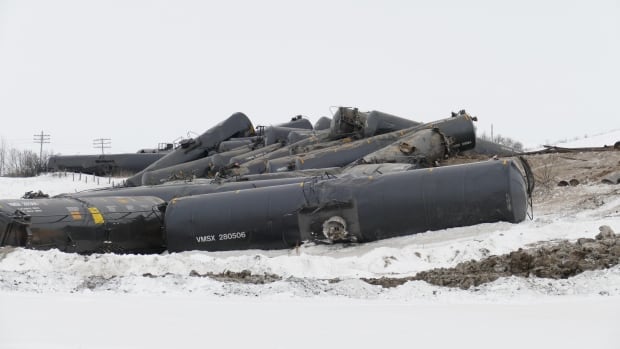 CN crews are responding to the derailment, which occurred at 3:30 a.m. Saturday morning near St. Lazare, about 300 kilometres northwest of Winnipeg near the Manitoba-Saskatchewan border, a spokesperson from the railway said.

« You can smell crude in the air. That’s really concerning, » said rancher Jayme Corr. The derailment happened on his property, about 10 kilometres south of St. Lazare, in the rural municipality of Ellice-Archie.

« There’s oil leaking, and where they’re sitting is [near] a water lagoon, » he said. 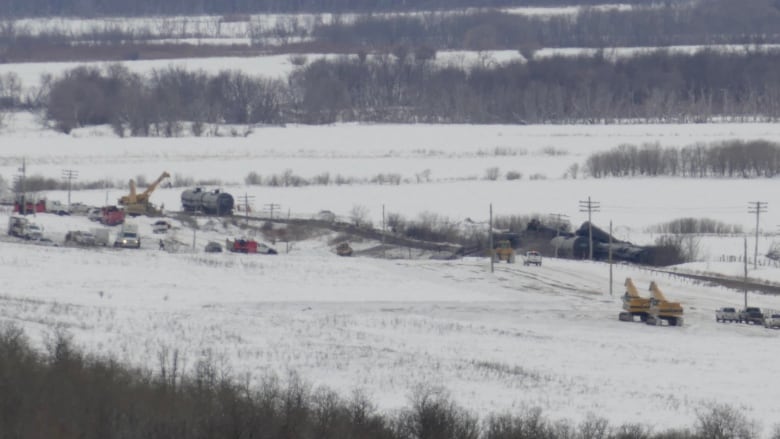 The derailment happened around 3:30 a.m. Saturday. As of Saturday afternoon, crews were still on scene. (Riley Laychuk/CBC )

Emergency personnel woke Corr up around 5 a.m. Saturday to alert him to the derailment, which happened just under two kilometres from his home.

No injuries or fires reported

Initial reports are that approximately 37 crude oil cars have derailed and that there is a partial leak of crude oil, Jonathan Abecassis, a media relations director for CN, wrote in an email to CBC.

« A perimeter has been set up around the area to facilitate site access. There are no reports of injuries or fires, » he wrote.

« CN crews will be conducting a full site assessment to determine how much product has spilled and exactly how many cars are involved. First responders are on location. »

CN’s environmental team has started cleaning up the area.

Corr said his cattle have since been moved away from the area, but he’s concerned that his main water source for the summertime will now be contaminated. 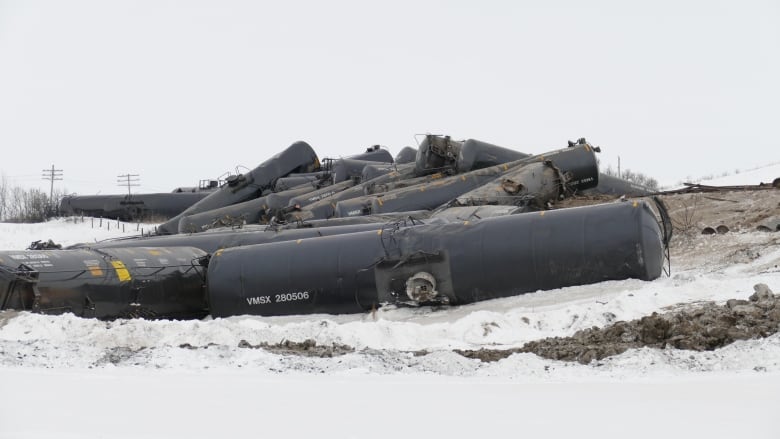 The train derailed about 10 kilometres south of St. Lazare, in the rural municipality of Ellice-Archie. (Riley Laychuk/CBC)

The rancher says he thinks a derailment like Saturday’s has been a long time coming.

« It seems to be the trains go faster, they’re longer, heavier, and the maintenance is getting less and less, » Corr said.

The Transportation Safety Board of Canada has sent investigators to the site of the derailment.

Jean-Paul Chartier, a rural municipality of Ellice-Archie councillor, said staff from the local fire department are on the scene of the derailment, assisting CN crews.

Trains frequently run through St. Lazare, and Chartier said he’s thankful the crash didn’t occur closer to the community. In areas of the village, there are houses just hundreds of metres from the tracks, and 30 to 40 trains can travel past each day, he said.

« Every time they come through, you think of the tragedy that happened in Quebec, » he said, referring to the Lac-Mégantic, Que., rail disaster, which killed 47 people after a freight train loaded with fuel exploded.

« It’s discouraging. Like you look at it everyday and you say ‘hopefully it’s not today and hopefully it doesn’t ever happen.’ But you’ve always got it in the back of your mind. »