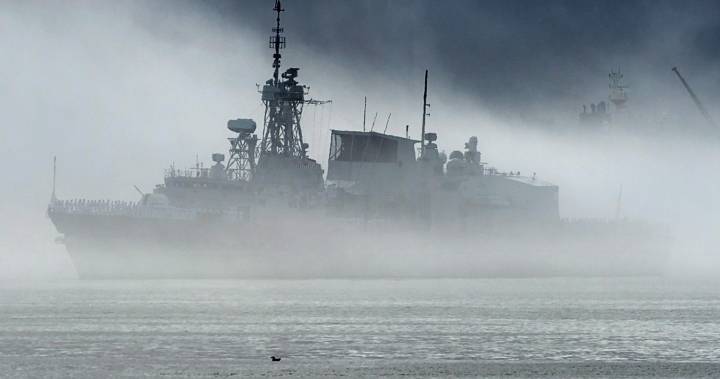 The Royal Canadian Navy is reporting a shortage of sailors.

The regular navy force is made up of about 8,000 sailors, according to Commodore Steve Waddell, but they’re currently 10 per cent short of that.

In some trades, the shortage can be even higher, with sailors taking time away from their duties from things like training, parental leave or sick leave.

“When you add that up on some of the more distressed occupations, that 10 per cent can become 15, 20, 35 per cent more,” Waddell said.

READ MORE: Shortage of sailors a cause for concern for Royal Canadian Navy

Those numbers are alarming, says retired Commander Ken Hansen, but they’re not surprising. He points to a number of reasons the navy may be having issues recruiting.

“They have problems with leadership who abuse their authority,” he said.

Hansen spent over three decades with the navy and did a brief stint in Ottawa working in personnel.

“We used to calculate our loss rate at about three per cent a year,” Hansen said. “When it got to five per cent, that was a serious situation. Seven per cent was an emergency.”

The navy currently operates in a command drive culture, Hansen says, describing it as one in which all considerations come second to the mission and the commander’s reputation. But he says that culture isn’t attractive to the younger generation the navy is trying to recruit.

“People today tell me, and I’ve had this conversation many times, they want to be as loyal to an employer as they are to them, and that’s not happening,” said Hansen.

“Expecting all the effort from the people and the compensation goes upward, but it doesn’t come downward to them.”

Another barrier, Hansen says, is the lifestyle at sea — particularly the issue of alcohol. Current rules prohibit alcohol on board while sailors are conducting operations at sea, unless they get special permission.

“So you expect us to do these dangerous things in far away difficult places, [go to] uncomfortable places to live in and we can’t even have a beer in our own… living or dining room?” he said, “It is such an enormous dissatisfier.”

Waddell says most Canadians considering the navy do not consider the rules around alcohol to be a big issue, but he does acknowledge the lifestyle on board can be difficult. The navy is doing what it can to make things more comfortable for sailors, he says.

“We’re always looking to make sure we adapt our framework and culture over time,” Waddell said.

“We’re doing things like tracking, per sailor, their time away from home port so we truly understand how much time they spend away from families,” he noted, “or for doing investments in their physical fitness and well-being by making sure there are gyms in all of our ships. We’re doing things like Wi-Fi at sea to make sure they stay connected to their families.”

Waddell says the changes are already having an impact, pointing to a decrease in attrition levels in recent years. But Hansen says these changes are not enough to attract new recruits.

He recommends looking to other countries that have successful models, like Denmark, where the navy is the country’s top federal employer.

“They have compensatory time off,” said Hansen.

“When you go away for a five to six-month posting at sea, you’re off for an equal amount of time and you can do whatever you want.”