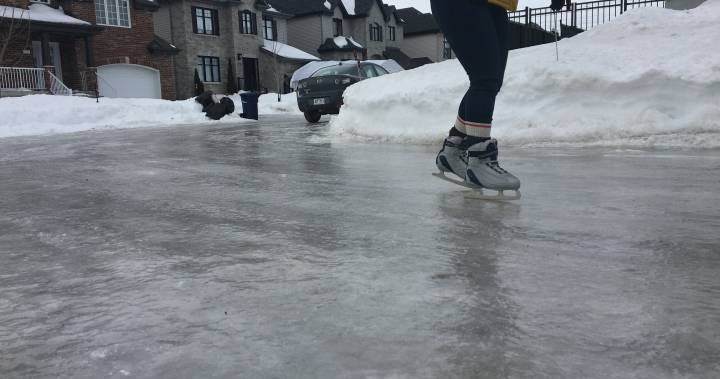 It’s easier to get around André-Du Bouchet Street with a pair of ice skates than a pair of boots these days,.

Part of the street in Laval is covered in ice that is as smooth, if not smoother, than some public rinks.

“For someone who doesn’t normally skate, I’m getting very good,” joked Sidney Tayebi to Global News.

The Laval resident says she’s never seen her street in such bad condition in the seven years she’s been living on André-Du Bouchet Street.

“If they would have kept up with the snow cleaning, then we wouldn’t have this problem today,” she said.

While the street is a sheet of ice, the sidewalk is covered in snow several feet high.

“I feel terrible for the older people around here, we can’t walk. We have to drive in our own neighbourhood. We can’t even walk,” Andy Golemme, another resident on the same street said.

Driving around Laval, Global News saw several streets — both secondary roads and busy primary ones — that hadn’t been cleared of ice and snow.

“Somebody needs to take responsibility. It’s not normal this. Everybody is complaining. I’m not the only one,” George Mitskas said.

The resident lives on Ethier Street — another road that is covered in ice and snow.

Both sidewalks are completely covered and unusable.

The sidewalk on Notre-Dame Boulevard is a sheet of ice. Global News saw a pedestrian avoiding it by walking on the busy street instead.

“It is our first winter of this kind. Of this magnitude,” Ray Khalil, Laval’s executive committee member responsible for public works, told Global News.

Khalil admits not all the roads are getting cleared of ice and snow as quickly as possible.

But he insists it’s not without effort.

The city councillor says 95 per cent of the annual road salt has already been used and more has been ordered.

He says crews have also been working overtime to try and keep up with the snow and ice removal.

But Khalil insists a lot of the problems are due to the fluctuating weather conditions this winter.

“We will put the salt, we will put the abrasives then the temperature rises up again, everything melts a little bit. And then drops down. Sometimes we’ve seen within 48 hours a 22 degree difference right? So it will freeze all over again and we got to start the process again,” he said.

Khalil says a new strategy is being worked on to improve snow and ice removal.