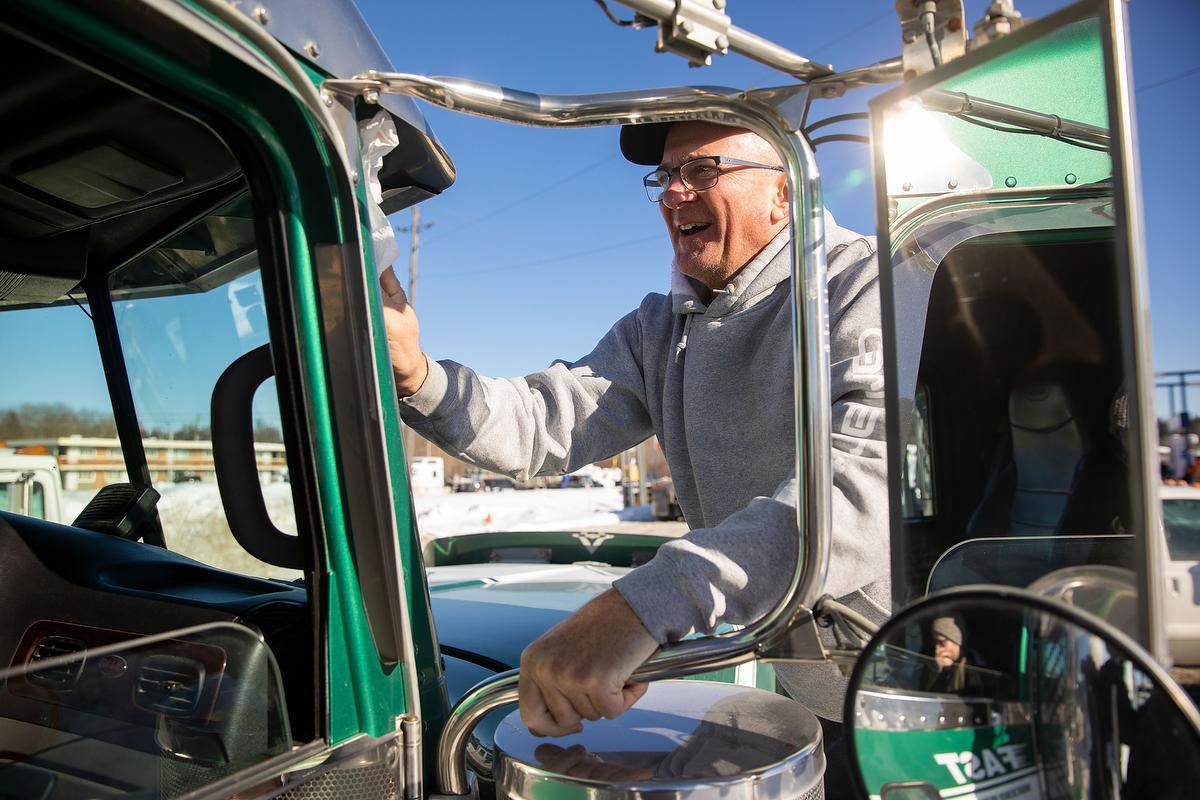 PEMBROKE, ONT.—Before Nigel Pryke joined the convoy to Ottawa, he thought he was driving for unity.

Part of a southern Saskatchewan group of truckers that fell in with the convoy on Friday, he’s a member of a cross-country cavalcade calling Canadians from east to west to demonstrate at Parliament Hill on Tuesday. Representing his employer from the driver’s seat of a company truck participating in the procession, he’s technically on the job.

The point of the protest, organizers say, is to show support for the country’s oil and gas industry by opposing the carbon tax and legislation thought to harm the sector, among other things.

And there’s the hitch.

Rallies held in towns and cities on the route have seen supporters — along with convoy vehicles, drivers and passengers — sporting signs and slogans calling for more than just support of the energy sector.

“I like the whole idea of the unity, Canadianness,” Pryke said Sunday afternoon while travelling down a stretch of the Trans-Canada Highway between White River and Wawa, Ont. “But when I see hats that say ‘Make Canada Great Again,’ … well, that’s Donald Trump. Donald Trump is not Canadian,” he added.

“They’re basically running the show,” Pryke said of the convoy’s significant yellow vest contingent. ‘There’s so much of this out-and-out hatred for Trudeau that it’s getting in the way of everything.”

Two days before, Pryke recalled, he was enjoying himself with the Saskatchewan company climbing up to Virden, Man., a rally point on the route, where the smaller group was scheduled to join forces with the main train.

“I’m chatting to these people and then the guys from the convoy arrive,” he said. “I had no idea that the yellow vests were even involved. The whole feeling changed all of a sudden.”

In mid-January, Glen Carritt, a councillor for the town of Innisfail, Alta., and lead co-ordinator of the convoy, changed the name of the event from the Yellow Vest (Official) Convoy to Ottawa to the United We Roll Convoy for Canada.

The event’s values, he explained Sunday following a rally in Sault Ste. Marie, Ont., haven’t changed. The mission is to protest carbon pricing, and bills C-69 and C-48, which would change approval processes for energy projects and ban oil tanker traffic on B.C.’s northern coast. Needless to say, the convoy also packs a heavy pro-pipeline punch.

But another, more controversial, complaint that sets this convoy apart is its stance against the United Nations migration compact.

Since appearing in Canada by way of France, the yellow vest movement has been accused of taking an anti-immigrant position against the compact — an intergovernmental agreement to regulate migration in light of factors that have led to its growth, such as climate change.

Despite the fact that the agreement is not legally binding, members of the movement, including those participating in the convoy, claim it weakens Canadian borders and threatens the country’s sovereignty and security, touting as much in their signs and statements.

Shortly before he rebranded the event, a coalition of oil and gas advocates tried to organize a similar convoy — one focused specifically on the industry, while rejecting any association to the yellow vest movement. But they cancelled it, claiming it was “no longer viable” due to “unexpected challenges associated with the event.”

Citing a “lack of professionalism” in the online forum used to promote and support the convoy under the yellow vest name, Carritt said the rebrand was born from an interest to open up the event to more people.

“It felt like the name may be holding us back,” he explained. “This allowed everybody, including yellow vests, to be involved in this movement.

The website for the convoy notes that anyone is allowed to join. But that invitation has also opened the door to anyone willing to make the trip.

At the Sault Ste. Marie rally on Sunday night, a crowd, including a small child, chanted “Trudeau sucks.” One man wore a yellow vest with the words “flush the turd 2019” written on the back. Like the varied sea of horns that announce every convoy departure, the complaints from the crowd were as varied, and almost as loud.

Carritt acknowledged that the open invite could convolute the convoy’s message, and said he doesn’t support the negativity found at rallies like the one in Sault Ste. Marie. But he said he has no control over how people choose to express themselves in the movement.

The messages from the sidelines have also been diffuse, with those standing along the highway waving everything from the sort of signs found at rallies, to Canadian flags, yellow vests, hockey jerseys and posters of the Charter of Rights and Freedoms.

From his vantage point, Pryke said he recognizes that the yellow vests are inextricably linked to this demonstration (both in the convoy and alongside it), but he’s trying to find the silver lining for a trip that took an unexpected turn early on.

Despite the fact that yellow vests are “very much part of the mesh of the convoy,” Pryke said he finds comfort in the support he’s seen from the sidelines, almost every step of the way.

“I don’t think the yellow vest message is the message of a lot of these people standing on the highway,” he said between Wawa and Sault Ste. Marie, a stretch of road that drivers on the radio repeatedly flag as treacherous.

Near Batchawana Bay, 50 kilometres out from the Sault, supporters launched a stream of fireworks for the drivers.

Tugging on the leather braided strap on his left, Pryke honked his horn in gratitude, like he does for every other show of encouragement seen along the way.

“I’m riding this wave,” he said. “All of this good feeling I’m getting from these people standing beside the roads.”