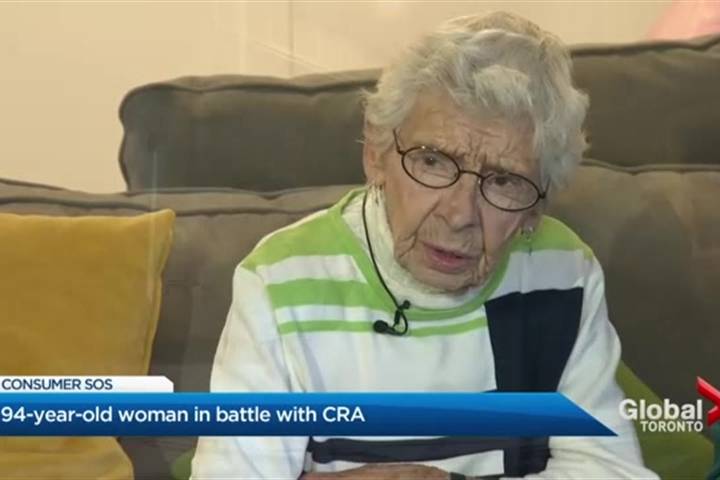 A 94-year-old Bradford, Ont. woman says the Canada Revenue Agency is harassing her with written demands for money after she says an agent said she owed nothing.

No, these are not fake CRA demands like you read about, perpetrated by offshore scammers threatening jail if you don’t pay: This is the real deal.

“That’s an appreciable sum when you’re on a limited income,” said Elizabeth LeMoine, referring to roughly $1,200 being sought by the CRA.


READ MORE:
CRA issues? The Taxpayers’ Ombudsman might be able to help — for free

“It’s like a slap in the face,” said LeMoine, referring to the assurances she and her daughter received from a CRA agent on the telephone that the persistent demands would be discontinued.

“I think it’s shameful that you can’t defend yourself,” said LeMoine’s daughter, Christine, who has been working to resolve the issue for more than a year.

She said she called the CRA about a hundred times. However, Christine said she can’t get through due to call volumes.

Last year, she contacted her local member of parliament, Peter van Loan, whose office promised to investigate. However, Van Loan resigned his seat this summer to return to his law practice in Toronto. Christine said the constituency office will not do anything about the situation..

The demands appear to relate to Elizabeth’s relocation to Bradford from Pasadena, Newfoundland, where she lived for more than 60 years. She is originally from Ireland.

From what the LeMoines can glean from conversations with agents, the CRA appears to believe that Elizabeth moved to Ontario in 2016, not 2017, when she sold her house in Newfoundland.

When contacted by Global News, the agency refused to discuss the case due to privacy (even though Elizabeth LeMoine consented to have Global News contact the CRA for the purpose of getting action).

“While we can’t comment on a specific case due to the confidentiality provisions of the Income Tax Act, reassessments due to a move can happen,” CRA spokesperson Dany Morin wrote in a statement.

“We are committed to working collaboratively with all taxpayers to resolve their tax situations with respect, fairness and integrity.”

Elizabeth said she doesn’t object to paying her taxes in full, and has done so her whole life. But she said she is unwilling to pay the government under the circumstances.

“It would be like giving in when you know it’s wrong,” Elizabeth said.

Christine said the experience has revealed how difficult it can be do deal with the government bureaucracy.

“Once they’ve got their boot on your neck, they’re not taking it off until they get your money. There’s no one that cares,” she said.