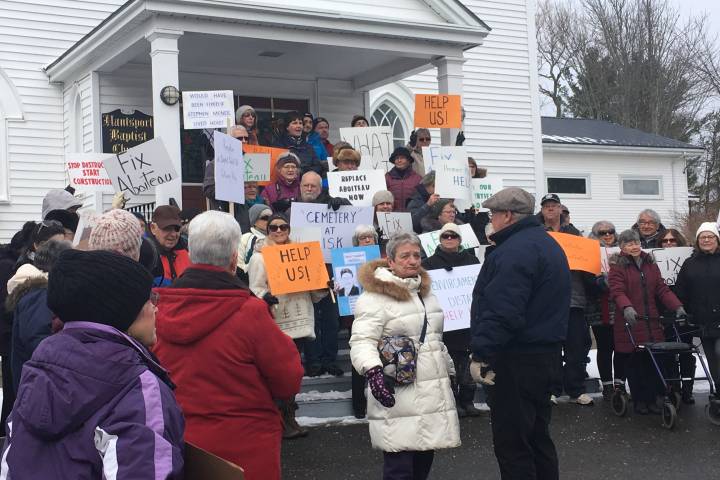 The Hantsport aboiteau was a wooden structure that helped to protect the community from the Minas Basin’s tide for hundreds of years. But in September 2017, it gave way to the water.

Area resident and spokesperson for the Aboiteau action group, Traci Curry, says the aboiteau had been in need of repair for years.

“It had been used by a rail line, that rail line is now defunct,” said Curry.

“Repairs didn’t get made and so one big push by the tide, a little bit bigger than the usual tide devastated that aboiteau and released the water.

Curry says since then, the gap has only widened with each passing tide. During high tide the waters flood over what was once used as farm land, and has been eroding surrounding land. A cemetery sits atop a hill nearby and there is concern with water eroding the banks that the cemetery could be at risk.

Protesters crossed the bridge that connects the town to the 101. There is concern flooding waters could damage the… twitter.com/i/web/status/1…

Nearby homeowners are also suffering from the impact.

“Saltwater has come over the road and impacted my well,” said Evan Merks, who owns two nearby properties.

“It turned my freshwater well into a saltwater well. Along with that it’s killing the vegetation along the bank that stabilizes the bank that my houses reside on.”

After about 500 hundred people marched in protest across a bridge near where the aboiteau once stood, the government announced change is coming.

“We’re going to come in with a temporary solution at first, we’re going to be on it quickly very soon and then we’re looking at the longer term solution,” said Minister of Municipal Affairs Chuck Porter.

The announcement was met with applause and cheers from protesters, but many also questioned what took so long.

“It’s taken time to get to where we are,”said Porter. “First of all we don’t own the property.”

The property is owned by the Windsor and Hantsport Railway Company Ltd. and the provincial government has issued the president of the company an emergency directive to address the issue. The matter is now before the courts, but Porter says a solution can’t wait.

“We’ve made a decision, the province has made a decision we’re going in to fix it cause it needs to be done and we don’t want to wait on this any longer.”

Rail tracks that used to cross over the river before the aboiteau was destroyed.

But for Merk, it’s too late. He says even with a fix, it will take years to clear up from all the saltwater contamination.

“I think my problem is going to be never ending,” he said.

Community members are standing behind Merk and other property owners affected. While they are happy the aboiteau will be fixed, many say there is still more to do.

“People need to be compensated,” said Dale Janes, who has lived in the area her whole life. “For the loss of their wells, and their property and septic systems.”