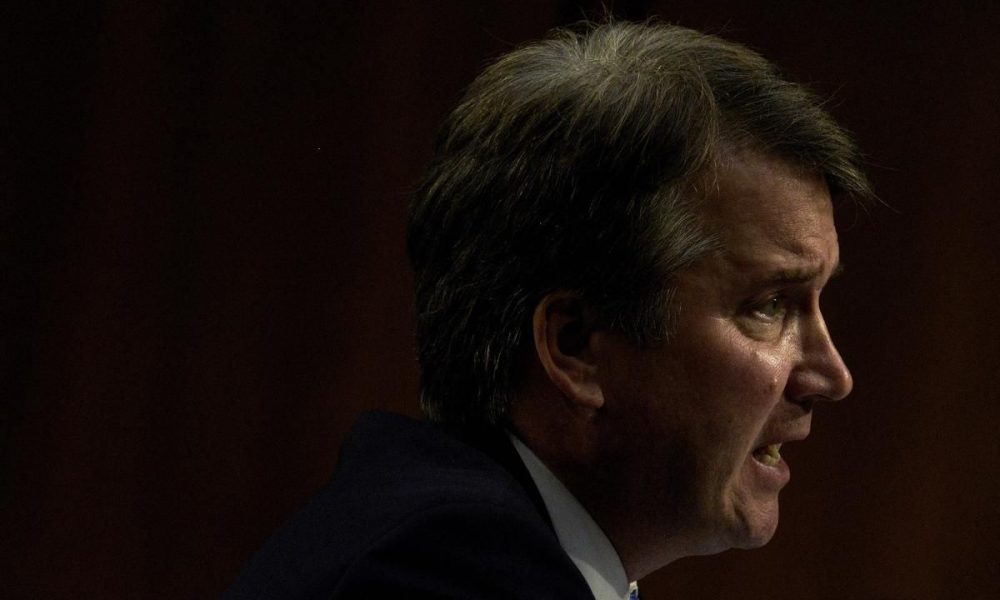 Brett Kavanaugh maintains that he “never sexually assaulted anyone, not in high school, not ever.”

The U.S. Supreme Court nominee spoke to Fox News on Monday, seated strategically, it would seem, next to his wife, Ashley. She claimed on camera that he was a decent man—that is, not the sort of guy who pins a woman down and forces a hand over her mouth in order to muffle her screams while he tries to rape her.

Kavanaugh — who presently stands accused of assaulting two women, Christine Blasey Ford in high school and Deborah Ramirez in college — seconded his wife’s claim and made another: Ford’s allegation was spurious because he, Kavanaugh, was a virgin when the alleged assault took place.

Conveniently, Kavanaugh failed to explain how his then-chastity is relevant to an accusation of attempted rape. A virgin, after all, is perfectly capable of committing sexual assault, unless you’re under the truly spurious impression that anything short of forced intercourse is not a big deal.

Ramirez, meanwhile, alleges that Kavanaugh exposed himself to her at a college party and thrust his penis in her face, an act that, once again, meets the definition of sexual assault, even if a mere virgin is the one carrying it out.

Whether Kavanaugh did these things, we don’t know. (There will be a formal hearing on Thursday.) In the meantime, however, some will tell you they do know. In fact, many already assert that Kavanaugh is guilty because they “believe all women,” a mantra that, I have to admit, makes me deeply uncomfortable. To believe all women, after all, is to assume the guilt of all alleged predators, unless of course the alleged predator is also a woman, in which case the imperative paralyzes you.

Kavanaugh was supposed to be a midterm boon for the GOP, but not anymore

Kavanaugh’s high school yearbook page is ‘horrible, hurtful’ to a woman it named

After second allegation against Kavanaugh, top Democrat calls for delay in nomination hearing

And I don’t believe it’s wise or right to assume the guilt of anybody who has not stood trial, nor been subject to a formal investigation. I also fail to understand how anyone can advocate in good faith for an investigation into the Kavanaugh affair while at the same time maintaining that they “believe all women.” If you wholeheartedly believe one party’s account in the absence of an inquiry, what purpose does the inquiry serve? Your mind is already made up; new evidence will not change it.

Personally, I find Kavanaugh’s accusers credible because there is nothing to be gained for anyone by going public with an assault allegation, unless it’s a litany of pain. And I understand why any friend or relative of an alleged victim might take an absolutist stance about the truthfulness of an accuser — that’s what friends and relatives do. But for anyone else, journalist or not, the absolutist road is a tricky one to travel.

In short, I don’t believe all women. But I also don’t believe Brett Kavanaugh. And if I’m put off by a trend of absolutist thinking in feminism, I’m even more put off by the notion that the #MeToo movement “has gone too far.” Too far for whom exactly? For Harvey Weinstein, for Bill Cosby, for Jian Ghomeshi and Louis C.K.? (The latter an accused predator whose penance didn’t involve jail time, but a vacation from the spotlight followed by a standing ovation upon his return to it.)

#MeToo detractors like to argue that thanks to the movement, ordinary men live in a culture of fear—that they can’t so much as ask a girl to dance or give her a hug without risking an assault accusation. This argument would be a bit more credible if the high-profile men routinely targeted by #MeToo were under fire for garden variety creepiness: for, say, making the occasional salty joke at a board meeting. But that’s not by and large what this moment is about. This moment is about exposing dangerous, serial, abusers to the bracing light of day.

Women claimed that Ghomeshi punched and choked them. Cosby and Weinstein allegedly raped them. Louis C.K. allegedly masturbated in front of them without their consent. And in this case, Kavanaugh allegedly attempted to sexually assault one woman and forcibly thrust his penis into the face of another without her consent.

And yet, in the minds of many conservatives, including the panel of Republican women who recently spoke out in defence of Kavanaugh on CNN, the judge’s alleged sins were minor and commonplace.

Here’s one such Republican voter, Gina Sosa, on the matter: “But we’re talking about a 17-year-old boy in high school with testosterone running high. Tell me, what boy hasn’t done this in high school?”

What boy hasn’t pinned a girl down against her will and held his hand over her mouth? Well, most of them, I hope.

It’s odd, Conservatives love to accuse Liberals — and feminists especially — of hating men. But do you not have to have a profoundly dim view of the male gender to believe that Brett Kavanaugh’s alleged crimes are normal? Or am I the only person left on earth who thinks that most men are decent human beings?