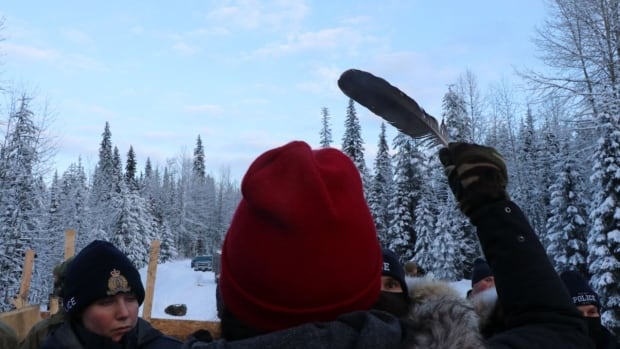 RCMP will conduct a review of what took place last week after officers entered a fortified checkpoint on a forest service road in northern B.C. where people at the Gidimt’en camp were barring a pipeline company from access.

A court injunction granted in December ordered people to stop preventing Coastal GasLink from gaining access to the road and a bridge. RCMP began enforcing the injunction on Monday, arresting 14 people, and sparking protests across Canada.

Reading off a prepared statement in a press conference in Vancouver on Monday, Assistant Commissioner Eric Stubbs said that the review is being conducted as it would for any major operation and that, « to date, we have not yet identified any issues regarding police officer conduct. » 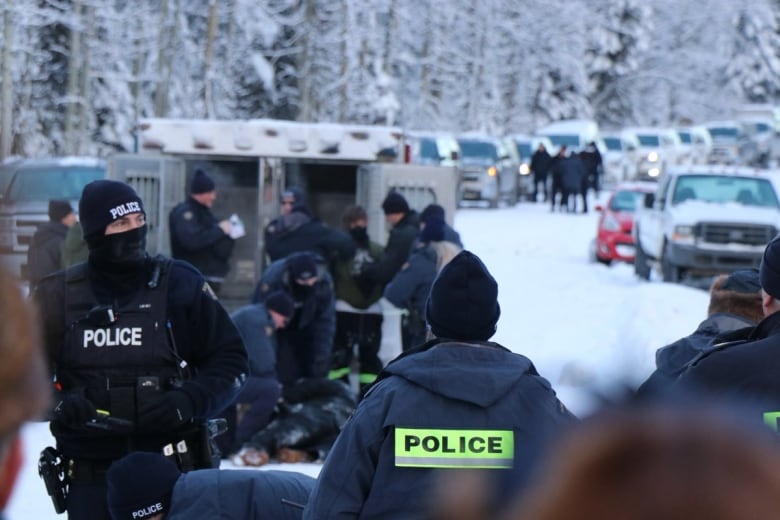 An RCMP official said that prior to the injunction being enforced, officers developed an operational plan that involved moving police resources into the area because of the location of the blockade and the ‘unpredictable’ nature of what could have happened. (Chantelle Bellrichard/CBC)

But people arrested at the Gidimt’en camp alleged to CBC News that there was an inappropriate use of force by police, with a spokesperson for the camp describing the scene as « chaos all around. »

The Coastal GasLink project is run by TransCanada Corp. and is meant to move natural gas from northeastern B.C. to the coast, where a liquefied natural gas project is scheduled for construction.

TransCanada has said it signed agreements with all First Nations along the proposed pipeline route to LNG Canada’s $40-billion liquefied natural gas project on the coast — but the hereditary leaders say those agreements don’t apply to the traditional territories.

Wet’suwet’en hereditary chiefs and RCMP have since reached an agreement over the enforcement of a injunction.

Stubbs said that prior to the injunction being enforced, RCMP developed an operational plan that involved moving police resources into the area because of the location of the blockade and the « unpredictable » nature of what could have happened.

« This is an area that’s very remote, it’s an area that has a number of people that could swell from 10 to 100 so there’s a lot of unknowns. So we have to be ready to make sure that we can react to what is presented to us. »

« The situation was challenging — the protesters reaction to the police ranged from passive resistance, to active resistance to actual assaultive behaviour, » he said.

RCMP officers climb over a barricade and start making arrests to enforce the Coastal GasLink injunction at the Gidimt’en camp in northern B.C. on Jan. 7, 2019. 1:42

But Wet’suwet’en Hereditary Chief Na’moks said he didn’t consider those actions to be threatening.

« When you discuss a threatening action that would make me think of people being aggressive, and when you’re passively there, I don’t think there’s any aggression there, » he said.

« There is some inhumanity that happened there, I don’t think that our people needed to be treated in the way that. »

People arrested last week said that protestors were put at risk after RCMP pulled people from the gate and pinned them to the ground, and that barbed wire cut atop the gate was flying in people’s faces.

As part of their enforcement action, RCMP also established an exclusion zone, preventing access to the area by the public and media. RCMP have denied they jammed communications, preventing media and public from providing information about the situation at the camp on Monday afternoon.

The RCMP statement said that « the level of trust between the RCMP and the Hereditary Chiefs now in place will continue to play a direct and positive role going forward. »

Stubbs said there’s no timeline as to when the review will be complete.

He said RCMP will maintain a presence in the area this week and will next week transition to a « significantly scaled down presence, one that everyone is comfortable with. »