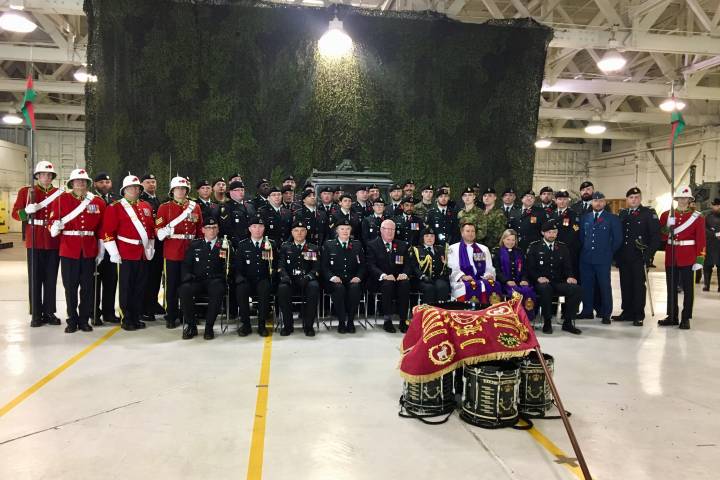 It’s a military tradition few will ever take part in.

For the first time in 48 years, the Saskatchewan Dragoons have had a new guidon consecrated.

“The guidon really is our most sacred possession,” Commanding Officer Major Gillian Dulle said. “It represents the sacrifices that soldiers that came before us from all of our units made.”

The guidon is a traditional military flag that symbolizes each regiment’s history and those who have served the unit.

It also bears a new honour recognizing the contributions of the Dragoons in the Afghanistan war.

“I commanded convoys where we hauled men, materials and equipment all over a battle space,” Sgt. Jon Barth recalled. “We saw the entire war top to bottom. We re-supplied everybody and recovered all the vehicles that were damaged in combat or with IEDs.”

22 members were deployed several times between 2005 and 2014, with many present today.

“In the military we call ourselves a regimental family,” Dulle explained. “It’s not a normal job. There are sacrifices we have to make in this job that make it a lot harder to do then a lot of other jobs.  When we bring together the old guard and even the cadets and those who serve in the unit today, that is the regimental family that is represented in the guidon itself.”

It’s the first battle honour to be added to the Saskatchewan Dragoons’ guidon since the battle of the Valenciennes in World War I- which, coincidentally, happened a century ago this weekend.

For now, the retired guidon will be preserved in storage. Veterans and current unit members hope to see it displayed at Moose Jaw city hall in a bid to preserve their past, present, and future.

“Our old guidon was with us my entire career,” Barth added. “I’ve been in 27 years now. To see the old guidon retired was actually an emotional event.”