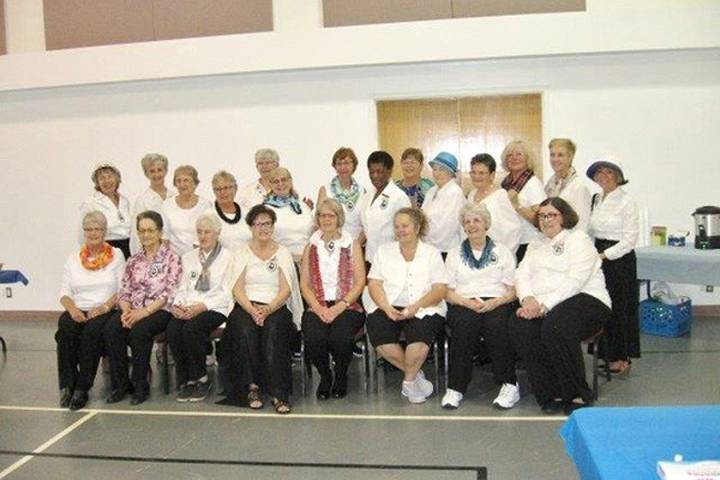 Grannies here, are helping grannies there.

A group of grannies from Sherwood Park will continue their ongoing efforts to raise money for grandmothers in Africa through an event called Good Words for Africa this weekend.

In partnership with the Stephen Lewis Foundation, The Eastside Grannies will donate all of the proceeds from the event to tens of thousands of African grandmothers who are raising 17 million orphaned grandchildren in a region of Africa south of the Sahara.

They’re raising them because of the country’s HIV/AIDS pandemic.

“We had heard about the needs of the African grandmothers, and most of us firmly believe that had we been born in Africa 75 years ago, their story would be our own,” said Carol Maier, an original member of the Eastside Grannies. “We feel a connection with them.

“When you need somebody, what you need most is a friend. We wanted to be the friends who could help these African grandmothers.”

The Eastside Grannies raise money through the Grandmothers to Grandmothers campaign and have been doing so for almost 12 years.

“The only ones who are left to look after the children are the grandmothers,” Maier explained.

“They take care of their grandchild 24 hours a day, seven days a week, for the rest of their school lives.”

Good Words for Africa sees attendees gather funds through pledges, show up to the event and play “their best game of Scrabble,” according to Maier.

“We chose Scrabble because Stephen Lewis is the founder of the Grandmothers to Grandmothers campaign and he is absolutely fabulous with words — anytime you listen to him, he’s just an inspiration,” Maier said.

“We wanted some way to earn money using words.

And though Maier noted that the money raised by the event has declined over the years, some of the 200 groups of “Grannies” across Canada have taken a liking to the format of the event, which originated in Sherwood Park.

“More than 60 groups have used the Good Words for Africa format, and it’s a great moneymaking event,” she said.

“We are thrilled to be the first to have done that. It was serendipity.”

Now, the Eastside Grannies are getting creative and finding new ways to raise money for the African grandmothers.

“We’re going to have a decor show,” Maier explained. “We’re going to ask people who support our cause to donate one treasure from their own homes to our sale, and we’ll take all these treasures and sell them.

“It’s going to be sort of like an upscale garage sale.”

The sale will take place at The Agora in Sherwood Park in the spring. To donate an item, Maier advised people give her a call at 780-464-4195.

The Grannies also hold their annual Rhubarb Rally every spring, their biggest event.

Every treat has rhubarb and it’s symbolic for the Grannies.

“We’re trying to emulate the African Grandmothers. They use what’s available to them to feed their families,”  Maier said.

“In every home site here in Alberta, there’s a patch of rhubarb. So we’re using rhubarb to make rhubarb pies, tarts, cakes, cookies… everything is made of rhubarb.”

The Rhubarb Rally is held at the Bethel Lutheran Church every year and last year’s event saw 240 people show up.

Although over 14,000 kilometres divides them, the Eastside Grannies’ connection with the African grandmothers continues to strengthen, and so do their numbers.

The Grannies started with eight original members, including Maier, and are now up to 30 members.

The Grannies are always welcoming more and if you’d like to become one or get involved with their events, you can visit grandmotherscampaign.org.