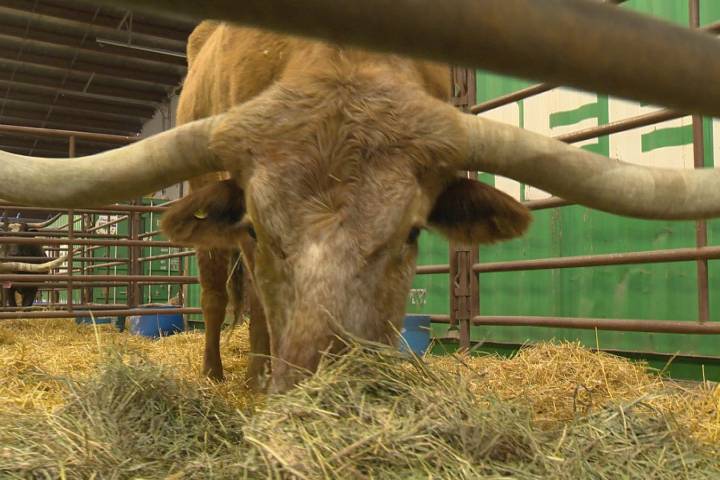 Between Thanksgiving and Christmas, there’s another holiday the agricultural community has marked on their calendars.

Agribition will open its doors for the 48th year on Monday, and with mere hours remaining before the show starts, preparations have hit high gear.

“This is probably our busiest day outside of the actual show,” Agribition CEO Chris Lane said. “They started early this morning and they’ll go well into the night tonight. It’s a big process because not only are they bringing the animals, but they’re bringing all their show supplies and everything they need for a full week here.”

A thousand head of cattle will be moved into Evraz Place by Saturday night.

“A lot of them will go to the wash racks to get shampooed and cleaned up, then they’ll take them back to the stalls and get blow dried and combed and clipped,” Lane explained. “That’s the routine for show cattle for the whole week.”

In 2017, purebred cattle sales hit an exhibition record high of $2 million, so there’s a lot at stake for ranchers who want to make sure their cows look their best.

“It’s important locally, but probably more important overseas and internationally,” Rancher and Agribition veteran Grant Hirsche said. “With modern technology, they can watch the show here over in Sweden. We have customers in Australia that will follow our cattle and watch them online.”

Agribition expects to welcome between 120,000-130,000 visitors, including more than 10,000 students, throughout the week of auctions, rodeo, music and food.

But there will also be a massive new attraction that’s sure to turn some heads.

Texas Longhorns and alpaca have been added to the roster in 2018.

The Johnson family and their prized bull Jim Reeves made the long journey north from Wyoming earlier this week.

“He had a little ice built up on each horn where they’d stick out of the trailer,” Kristopher Johnson said as he prepped Jim Reeves for next week’s show. “He got a lot of thumbs-up going down the interstate driving here! Everyone likes him because he’s so impressive, but what’s special about him is how docile and easygoing he is. We’ve even put a saddle on him and rode him before.”

The total transformation of Evraz Place isn’t done yet.

On Sunday, roughly 400 exhibitor booths will be installed with the clock counting down to Monday’s kickoff.