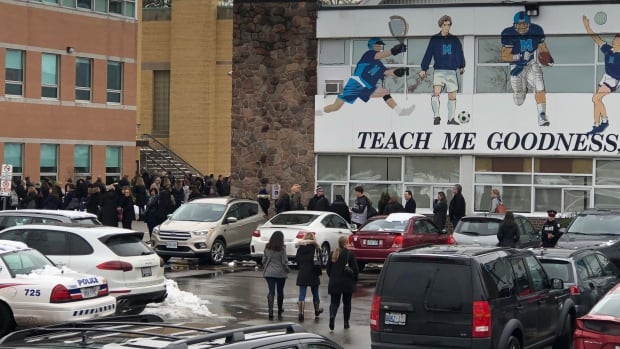 Officials at a Toronto private boys’ school announced Friday they’ve notified police about a third « incident » as the school continues to deal with a crisis sparked by allegations that students have been assaulted or sexually assaulted on camera.

St. Michael’s College School released no further information, but said parents have been notified. Crisis counsellors remain at the school for students, faculty and staff, officials said. Police officers are also guarding the facility, after it faced an unspecified threat on Thursday.

The latest news was included in a statement explaining how the school has handled the situation, which officials became aware of on Monday.

The school said that’s when the administration received a video of an alleged assault which took place in a washroom. The school said it notified police about what happened because it severely violated the student code of conduct.

By Monday evening, officials said they had received a second video of an alleged sexual assault in a locker room.

On Tuesday, the school expelled four students in connection with the first incident.

On Wednesday, the administration expelled another four in connection with the alleged sex assault, and suspended one more student allegedly involved in the first incident.

On Thursday, Toronto police said they were only notified about the alleged sexual assault after it hit the news on Wednesday; an account that matches the school’s timeline.

Police said in a Friday news release they are working with school officials and investigations into « a number of occurrences involving incidents of alleged assaultive and sexually assaultive behaviour have been opened. »

Police said there may be more victims and urged anyone who has not already come forward to contact them.

No criminal charges have been laid at this time.

Reaching out to victims

Two police sources told The Canadian Press the incident the school discussed with officers on Monday involved members of the basketball team bullying a student and soaking him with water.

Those sources said there was another incident involving the football team where a group of boys held down another student and allegedly sexually assaulted him with a broom handle. Both incidents were captured on video and circulated among students at the school.

In the wake of the shocking incidents, the school, which teaches Grades 7 to 12, said it has received a threat and taken steps to keep students safe.

The school said it has also reached out to the victims to provide support.

Meanwhile, a series of meetings were held with parents on Friday afternoon. You can read the school’s full timeline here.

Two former students expressed their disappointment at how the school handled the alleged assaults.

« It’s obviously disappointing that the school wouldn’t involve the police and maybe the Children’s Aid Society right away in the investigation, » said John Schuman, who’s now a child and family lawyer.

He noted, however, that as a private school St. Mike’s may not be subject to the same reporting requirements as those in the public stream.

Kyle Fraser claims he left the school, in part, because of the bullying he faced. He told CBC News he wasn’t shocked to learn about the allegations.

« That’s the culture at the school. Those are the types of people that go to the school, » he said.

With files from Farrah Merali