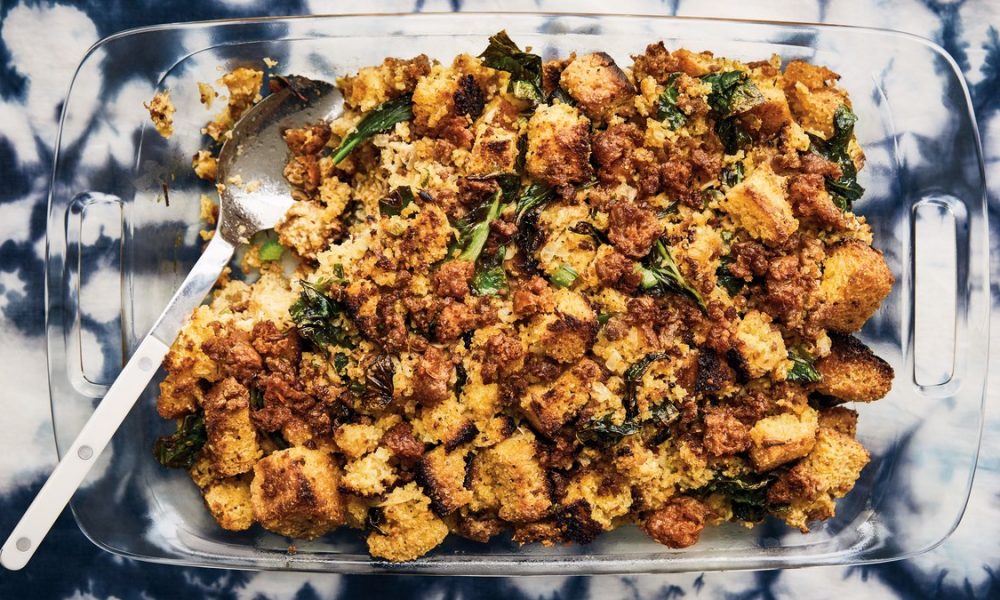 I’m going to tell you right off the bat: there are no shortcuts here. No cheat codes. No timesavers. No boxes of Jiffy stacked up like overdue library books. To make the best damn cornbread and sausage stuffing you need to first make excellent homemade cornbread. And we won’t budge about it. Return those overdue library books! Get some good cornmeal and a fresh pint of buttermilk, and let’s do this thing.

When Molly Baz was developing this classic Thanksgiving side recipe, she knew she’d need to go all out to make sure this version was the best it could possibly be. Bon Appétit Test Kitchen standards are normally high—but for this holiday, they’re higher than the freshly inflated Snoopy balloon at the Macy’s Thanksgiving parade. First, she’d have to develop a cornbread recipe that’s moist, not-to-sweet, and easy to slice and toast. This is cornbread specifically meant for stuffing, with less sugar than usual. By making homemade, you get to control the moisture and sugar levels, whereas so many cornbread stuffings made from a mix or store-bought cornbread can turn out mushy and pudding-like. We want actual bites of cornbread. The recipe is pretty simple: flour, cornmeal, buttermilk, sugar, salt, pepper, baking powder, eggs, butter. You can make it a day or two ahead, or just let it cool before the next part.

The cornbread is cut into cubes and toasted in the oven until it begins to dry out on the outside—it takes close to an hour. They’re sort of like cornbread croutons, and if it seems counter-intuitive after making that fresh cornbread, trust us: We don’t want that mush! Toasting guarantees that the layer on top gets a crispy exterior, while the stuff inside will soak up all the stock and sausage goodness, also known as: perfect harmony.

Cook up some hot or sweet Italian sausage, followed by the aromatics—onion, celery, garlic, rosemary, salt, and red pepper flakes—and then collard greens in all that sausage fat. Cream and chicken broth join in to continue softening the greens, and then everything gets mixed together with the sausage, plus some eggs, and the cornbread. The whole mixture sits for five or ten minutes to allow the cornbread to absorb the good-good (official term), and since we toasting it earlier, it won’t disintegrate to baby food in the process. Fret not!

Half of the cook time is under foil so the cornbread on top won’t burn. But we want golden-brown crispy crunch, so remove the foil for the second half and keep a close eye!

Is when you eat it.