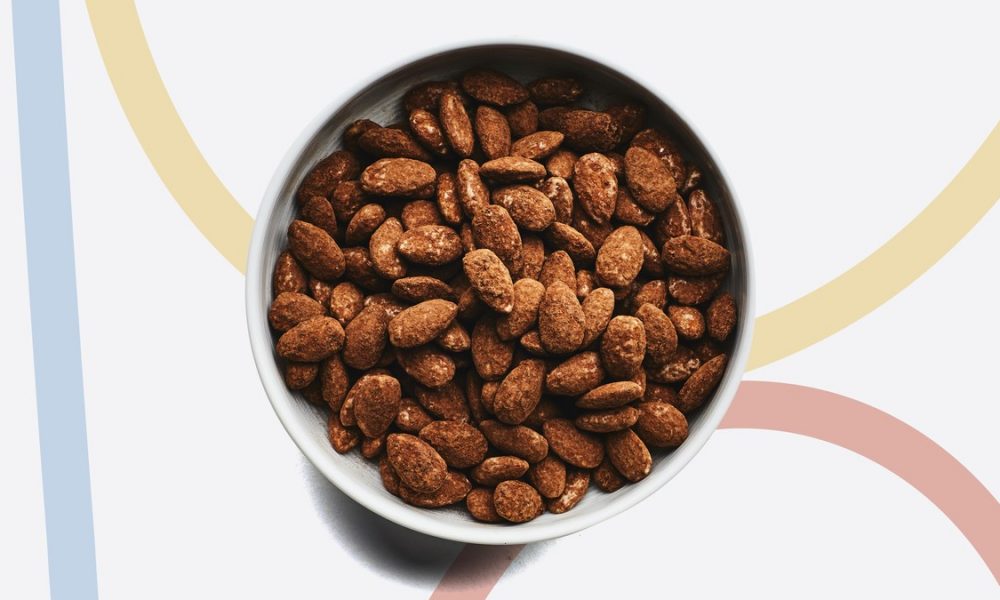 The only thing better than a good recipe? When something’s so easy to make that you don’t even need one. Welcome to It’s That Simple, a column where our staffers talk you through the process of making the dishes and drinks that they can make with their eyes closed. This week: last-minute cocoa almonds!

The holiday season is a marathon. Tonight is another party, but this time you didn’t have time to make cookies, or bake a cake, or run out to buy a bottle of nice wine for your hosts. You wish you did—you just…didn’t. Well, guess what? This is the perfect time to make these super-simple cocoa almonds—my favorite last-minute edible gift that is comprised of just five ingredients, and comes together in 15 minutes. I repeat: 15 minutes!

First things first: Preheat your oven to 350°. Spread 2 cups of whole raw almonds on a sheet tray and pop them in the oven for about 10 minutes, making sure to give them a toss at about the halfway mark so that they toast evenly. You can tell when they’re really done by giving them a sniff—they should smell roasty-toasty and delicious. (You can use already-roasted almonds, but you’ll still need to pop them in the oven to heat up a bit; they need to be warm for the coating to stick.) Once your nuts are nicely toasted, transfer them to a medium heat proof bowl and drizzle over 3 tablespoons of maple syrup and ½ teaspoon vanilla extract. Toss them vigorously until each almond is coated and shiny, which will take about two minutes—be patient!

Once the almonds are all glossy, use a fine mesh strainer to sift 3 tablespoons of powdered sugar over them. (This is my favorite part because powdered sugar is like the sweet equivalent to snow—sing a little Christmas jingle while it floats down over Almond Town!) Now, toss the almonds thoroughly again until each nut is evenly coated in a thick, sugary coating. Dump them back onto the same sheet tray you used to toast them, spread them out, and let them hang out for a few minutes so the syrup has a bit of time to set. Then grab your fine mesh strainer again and sift 1 tablespoon of cocoa powder over the almonds, tossing with your hands to make sure they’re evenly coated. And just like that: You’re done! If this isn’t a good enough reason to start buying almonds in bulk, I don’t know what is.

The cocoa almonds are best if you let them cool completely before storing in an airtight container, but if you’re in a real hurry you can just go ahead and pack them up (they’ll be cool by the time you get to that party). I love to pack them in a Mason jar and tie a little red ribbon around the lid—a little flair to show you care. And there you have it: a cocoa almond recipe that will ensure you never show up empty-handed to a holiday party ever gain.

Looking for a savory edible gift? We got you: 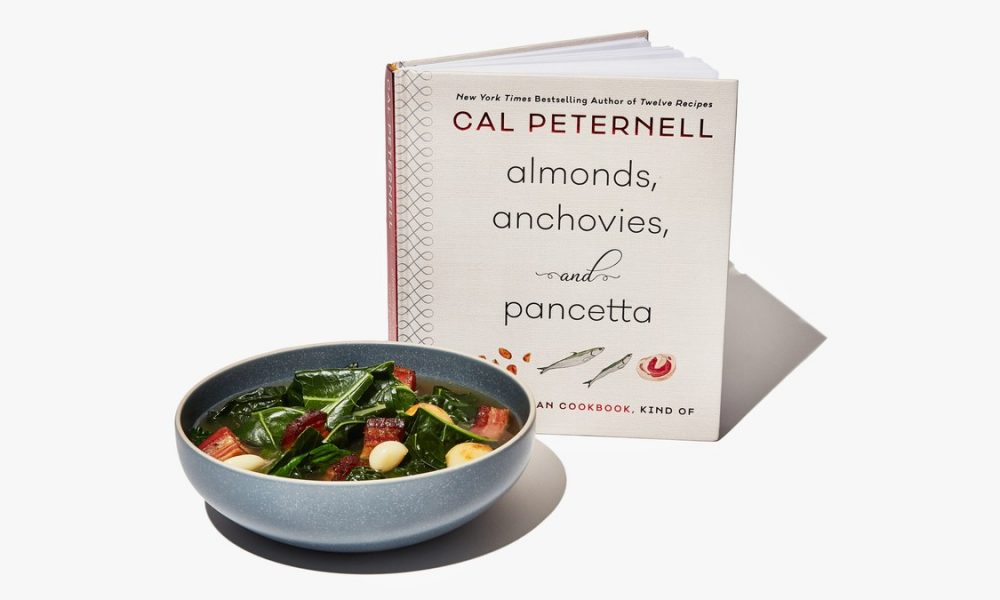 Earlier this summer, some friends and I gathered for a potluck-style dinner party only to find that every single one of us had brought a version of salad. Sure, some were bulked up with crispy bacon, or fried mushrooms, or crumbled cheese, or lots of cooked grains (and, to be honest, mine was mostly pasta), but the takeaway was clear: We all craved vegetables of different shapes and sizes, and lots and lots of greens. Not a big meat centerpiece to be seen.

Vegetable-forward cooking, where veg occupies the lion’s share of the plate, is the way most of the world has eaten for millennia. Recently, though, it’s become trendy in American restaurants, and it’s front and center in Cal Peternell’s newest cookbook, Almonds, Anchovies, and Pancetta. The sixty recipes are divided into three eponymous chapters—almonds, anchovies, and pancetta—based on which ingredient is the source of meat (he calls almonds, the clear outlier, “the meat of the plant world”). Petenell uses these ingredient as supporting characters: They’re there to add fat and salt, and thereby flavor and heft, to dishes that are largely plant-based. (The book’s subtitle is “A Vegetarian Cookbook, Kind Of” after all.)

Peternell came up with the idea when he was posed with the question, “What’s next for you after Chez Panisse?”—the famed California restaurant where he worked for two decades—at a party for one of his other books. “I’ve always had this fantasy about opening a restaurant called Anchovies and Pancetta, where those are the only meats served,” Peternell said. He added in almonds, which are comparable in terms of fat and umami content, for strict vegetarians. This way of eating, he writes in the introduction, is “healthy, leans toward sustainability, and is economical in a way that pleases both palate and pocketbook.”

What makes this book special—and why you’ll want to cook from it whether you’re a vegetarian or you love a good steak—is Peternell’s ability to translate his chef skills to an audience that might not have access to a sous-vide machine and peak-season Sun Golds. His first book, Twelve Recipes, was written for his son, who was leaving home for the first time and cooking in an apartment with a galley kitchen, a rental stove, and a limited budget and schedule. “I was able to keep that concept in my head and allow that to dictate the voice,” Peternell explained to me. He avoids constructing barriers to cooking by choosing his battles carefully, offering only the instructions that he believes will significantly improve the end result, and only in the form of invitation, not admonishment. If Peternell asks you to do something, you can trust that there’s a good reason behind it. “Forge ahead, but think about what would be different if you had a better pan or a sharper knife. Aspire to that.”

Some recipes are, indeed, aspirational—like artichokes and new onions baked with anchovies and bread crumbs, or warm bread with lardo and black truffle—while others are simply good flavor combinations and delicious-sounding ideas: greens with braised pancetta and garlic; roasted sweet pepper and egg salad with anchovies, olives, and capers; cucumber and green tomato salad with avocado, fish sauce, cilantro, and lime; and steamed clams with almond and parsley butter. Do I hear your stomach grumbling?

You know what else anchovies taste great in?

And no matter the difficulty level, every recipe will teach you something: Maybe it’s a new kitchen tip (you’ll make less of a mess chopping almonds if you crush them first with a rolling pin) or technique (to pan-roast eggplant so it’s cooked through and evenly brown, place a a slightly smaller skillet, wrapped in foil, on top of them to weigh the slices down). There’s even a bit of Greek mythology (including a creepy story about Zeus, the fertility goddess, and almond trees that you’ll have to read for yourself). Peternell gives himself permission to go on tangents in the headnotes, covering everything from the Rossellini movie Stromboli to the steel-drum and ukulele band Sister Exister.

Taken together, these intros, which are so much more fun to read than straight recipe-explainers, serve as windows into what connects this delightfully random array of recipes (okonomiyaki, almond butter cookies, a “weird and wonderful” sauce called Anchoïade de Croze): the tastes and experiences of Peternell himself.

Combine the rambling prose with Peternell’s practical advice and delicious flavor combinations, and cooking through the recipes feels like having a personal cooking lesson—and a long chat—with the chef himself.

But wait! Some nitty-gritty advice about our three stars:

Pick up a copy of Almonds, Anchovies, and Pancetta wherever you buy cookbooks. And if you want to learn more about the BA Cookbook Club and how to start your own club, you’ll find all that right here.