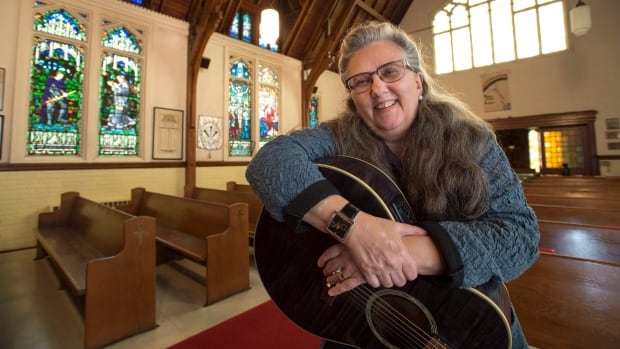 It’s long been known that Alzheimer’s patients often retain musical memories, even when recall of names, faces and places has been lost as the disease relentlessly destroys key areas of the brain.

Now Canadian researchers believe they know why, thanks to the power of MRI brain scanning.

Toronto scientists enrolled 20 people with early-stage Alzheimer’s or mild cognitive impairment in a study to discern what was occurring in their brains while they listened to familiar music and a composition they had never heard before while having MRI scans.

When subjects listened to the previously unknown composition, it lit up a region of the brain known as the temporal lobe, « which is what we would have predicted because that part of the brain gets activated when you listen to anything, » said  Dr. Corinne Fischer, director of the memory disorders clinic at St. Michael’s Hospital and one of the researchers.

But when participants listened to familiar music — from a playlist of songs they had chosen going back at least 20 years — there was a much more extensive pattern of activation of several areas of the brain, including those involved with emotion and the processing of language, movement and memory.

« There’s always been this question of why music and the ability to appreciate music is preserved, even in the latest stages of Alzheimer’s disease, » said Fischer.

« And I think one of the things this tells us is that it may be not so much the music as it is that familiar aspect of the music and the fact that that’s activating parts of the brain that aren’t typically damaged by Alzheimer’s pathology.

« So that’s why even though you might not know your name, you may not know your environment, you may still be able to appreciate a song because it’s activating those areas that are not damaged. »

Michael Thaut, the study’s lead author and a professor of music and neuroscience at the University of Toronto, said it’s common for people in even relatively advanced stages of Alzheimer’s to call to mind the melodies and lyrics of songs from their past, as well as the autobiographical memories attached to the music.

« They remember quite a bit of music, » he said, adding that someone might say « ‘Yes, this is Duke Ellington’ or ‘This was my favourite music when I went out with my wife.’

« But up to this point, we had no idea what the brain mechanisms are that drive these very long-lasting memories. » 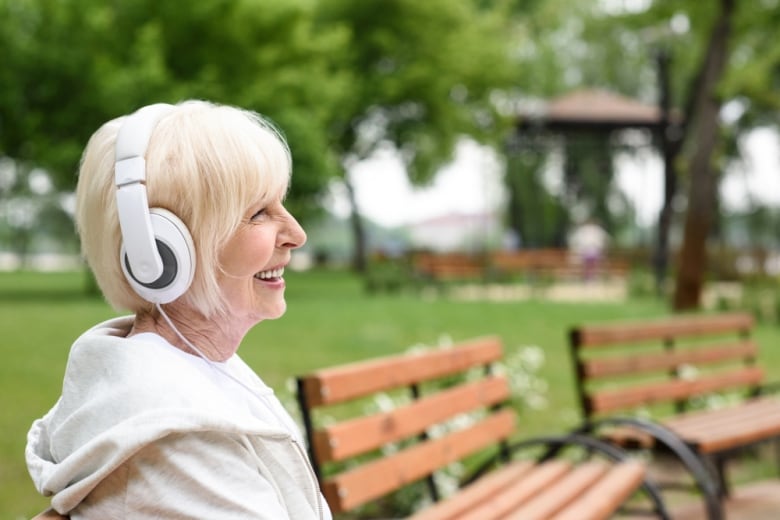 Canadian researchers suggest people with Alzheimer’s listen to familiar songs of the past each day and try to recall the life events the music evokes. (LightField Studios/Shutterstock)

That’s why the researchers are excited about their findings, which were to be presented Wednesday as a « hot topic » at the Society for Neuroscience conference in San Diego.

« This is the first study that we’re aware of that has actually studied these kinds of mechanisms and has come up with some ideas why the Alzheimer brain can retain music much longer than other stuff, » said Thaut, who designed the research and analysed the data.

« So I think this is a breakthrough study. »

‘Engage your brain in music’

For Colleen Newell, taking part in the research confirmed something she had long suspected — that her memory problems and difficulty with organization were signs of cognitive impairment.

« That’s one reason I went into the study, » said the 60-year-old guitarist, pianist and songwriter, one of about five professional musicians included in the research. « Not only did I recognize I was dropping [forgetting] nouns, but that my mother has Alzheimer’s.

« She’s 80, and she was having similar memory issues at my age. So I wanted to have a baseline to see what was going on. »

As part of the research, subjects were asked to listen to their playlist for an hour a day for three weeks, while trying to recollect associated life events and discussing them with family members or caregivers. They were then cognitively tested and also had their brains scanned again.

« What we found was there was improvement in brain functional connectivity, changes in brain activation and also improvements in memory scores, which told us that by exposing the brain repeatedly to this familiar music, people were actually improving cognitively and there was evidence that their brain was also changing, » said Fischer.

Connectivity is a measure of information flow between different brain regions, an important component of neurological function; enhanced connectivity and the other changes suggest that repeatedly listening to familiar music may give the Alzheimer-affected brain a cognitive boost, said Thaut, calling the results « stunning. »

« So I think we’re sitting on something extremely important. »

Fisher said these are preliminary results that need to be replicated in a much larger study, and future research also needs to determine if the beneficial effects of routinely listening to familiar music persist or are transient.

Still, the researchers hope their findings may offer the basis for a targeted form of music therapy, with a goal of potentially slowing the progression of Alzheimer’s disease and possibly other types of dementia — none of which has an effective pharmaceutical treatment or cure.

« Alzheimer’s disease at this point is non-reversible, » said Thaut, who suggests people with the condition could mimic the study protocol on their own, by listening to familiar songs of the past each day and recalling the life events the music evokes.

« We cannot say you will be healthy, » he said. « But we can say if you engage in that kind of exercise with your family, your friends, with the caregiver, your spouse, even to go to concerts, just engage your brain in music, from the data we have there will be some cognitive benefit. »

While the research found that non-musicians seemed to make more cognitive gains than those who routinely play instruments, Newell said she hopes continuing the study protocol on her own « will bump me up to keep me going. »

« And also it encourages me to listen, just to listen to music, » said Newell, a worship leader at a Toronto Anglican church, whose role includes spiritually based music. « I guess just incorporating it more into my daily life. » 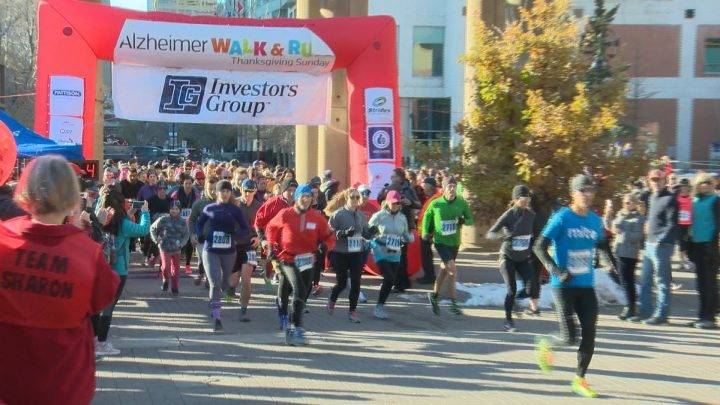 There is a new way of caring for dementia patients that aims at making the journey less frightening.

“Dementia care is one of the last bastions where we have a sector of society that is put right on the fringes as if they are non-people,” said Dr. David Sheard at an Edmonton conference on dementia care on Saturday. Sheard is a dementia care consultant and the CEO of Dementia Care Matters, a training provider based in the U.K. He suggests that caregivers learn “the language of dementia.”

“People with dementia can’t rely on facts and logic and reasoning and memory,” Sheard said. “They’ve become more heightened in their emotions and if you don’t respond to people’s emotions, that leads to behaviours and the wrong model has then been to approach people living with dementia as if they need behaviour management.”

On Sunday, Sharon’s family ran in her memory at Eau Claire Market in Calgary for the 28th annual Investors Group Alzheimer Walk and Run.

Sheard cautions against taking what dementia patients say literally because he says that is what may lead to their frustration.

“As you experience dementia and it progresses, you start crossing the bridge into another reality,” Sheard said. “And in that reality, you might be 83 in a nightie in a care home, but where you actually believe you are 40 years old, in a red dress wearing stilettos.”

In the past, the medical community was trained to bring the patient back across the bridge to reality, according to Sheard. But he suggests if caregivers accept what their loved ones see as reality, it results in better outcomes for all.

“After you’ll be left with positive loving memories right to the end rather than a sense of a gaping hole in the last few years of her life,” said Sheard.

The 28th annual Investors Group Alzheimer Walk and Run was held Sunday in Calgary. People had the opportunity to write messages about loved ones lost to the disease.

The Alzheimer’s Society of Calgary said support teams can create communication plans for families based on the individual.

“It’s different for everyone, so it’s good to have a customized plan for your own situation,” said Barb Ferguson, executive director of the Alzheimer Society of Calgary.

According the non-profit group, there are 17,000 people living with dementia in Calgary and the surrounding area with these numbers set to double over the next 15 years.