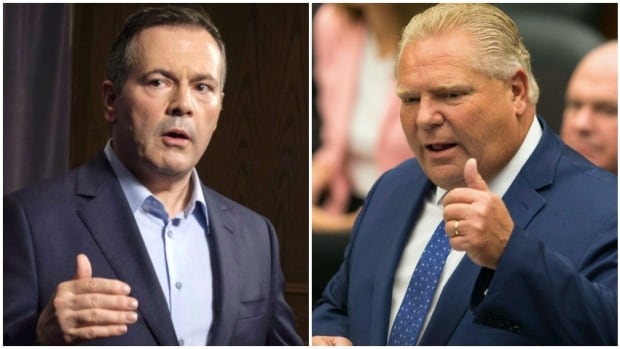 Ontario’s premier is in Calgary Friday to attend an anti-carbon tax rally being held by Alberta’s United Conservative Party.

Both Doug Ford, a Progressive Conservative, and UCP Leader Jason Kenney have been vocal opponents of the federal government’s plan to impose a price on carbon. Kenney, the leader of Alberta’s Official Opposition, has promised to repeal the province’s existing carbon tax if his party takes power next year.

Ford tweeted Friday he’s attending the « Scrap the Carbon Tax » rally « to stand with Albertans who oppose the federal carbon tax. A tax that is designed to make everything more expensive. »

Kenney said earlier this week having Ford join him for the rally shows Liberal Prime Minister Justin Trudeau that opposition to the federal tax is growing.

« That’s to Alberta’s advantage and I think we need to solidify the alliances that are developing with other provinces, » Kenney said.

Alberta Finance Minister Joe Ceci said Thursday those opposing the carbon tax don’t understand that to reduce emissions, you need to price them.

« They’re not free, and we have a clear plan in place, a carbon levy is raising money, we’re diversifying in this province, » Ceci said.

I’m in Calgary today for a rally with my friend <a href= »https://twitter.com/jkenney?ref_src=twsrc%5Etfw »>@jkenney</a> to stand with Albertans who oppose the federal carbon tax. A tax that is designed to make everything more expensive. One by one, provincial leaders are joining the fight against this unfair tax on families and businesses. <a href= »https://t.co/GZ3JQPjqcd »>pic.twitter.com/GZ3JQPjqcd</a>

The rally with Kenney is Ford’s second meeting this week with anti-carbon tax allies in Prairie provinces. Ford was in Saskatoon Thursday for a meeting with Saskatchewan Premier Scott Moe.

Saskatchewan launched a reference case with the province’s Court of Appeal in April, questioning the federal government’s jurisdiction to enforce a carbon tax on provinces that don’t comply with its climate change plan.

The rally is being held Friday evening at the BMO Centre on the Stampede grounds.