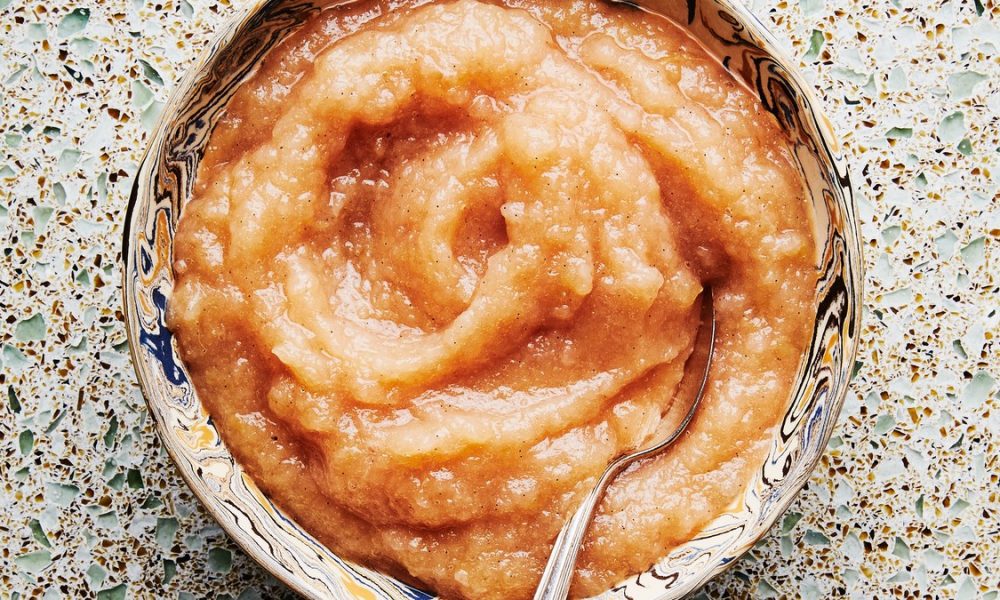 The only way to make applesauce

Attention leaf peepers! I see you out there, exercising your rights to participate in the annual apple harvest, showing the kiddies that apples do indeed grow on trees, eating still-warm cider doughnuts and pretending you can detect actual apple cider flavor contained therein.

It’s a beautiful day, the one you spend apple picking. The last time I went, I had to wrestle an incredibly sticky caramel apple away from my then-3-year-old before we got into the car because I was afraid his baby teeth would be torn right out of his head if he tried to take another bite. He screamed for 45 minutes afterward, and I spent that time trying to come up with ways to use the 15 pounds of apples we somehow managed to pick and pay for. Of course, there’s pie. But let’s be real: Even a deep dish pie only requires about six apples. Not even going to make a dent. You could make a second pie, I suppose, if you feel like competing with yourself (I can relate).

But after a day or two of apple salads, apples and cheese, and apple cake, you’re still going to be staring down a giant sack of apples. And there’s only one thing to do at that point: make applesauce.

The only applesauce to make is the one inspired by Julia Child, because duh what else do you need to know? The other reason to make it Julia’s way is because it requires the most minimal amount of effort. This recipe works with any type of apple, and it works if you mix and match all the ones you happen have on hand. Even better, you don’t even have to peel them! Just cut them in half, put them in a big pot with a cinnamon stick, some lemon juice, and a vanilla bean (or vanilla extract), then cover the pot and cook on medium-low. Et voilà: 35 minutes later, you’ve got mush. As an extremely intelligent reader sums it up on our recipe page: “Wow. That was shockingly easy. Five minutes of prep (including climbing the stepladder to dig up the cinnamon sticks) and 30 minutes later I had applesauce!”

Shockingly easy. Are there two more beautiful words to a home cook’s ears? The thing I have to climb the stepladder for is my food mill, which I use only a few times a year, and this is one of the recipes that helps it earn its keep. Once the apples have surrendered to the cooking process, morphing from a solid to a semi-solid state, I scoop them into my food mill and crank away, which efficiently purees their flesh and skins and holds back the seeds and tough bis of core. The finished sauce has a beautiful color (and added nutritional value) thanks to those skins, but you’d never know they were there. I also truly enjoy the fact that I don’t have to scoop out the seeds before cooking, because—again—the pies have exhausted me.

If you don’t have a food mill, go buy one. If you don’t want to buy one, use a melon baller to scoop out the cores from the raw apples prior to cooking, which is pretty easy, especially if you offer a child 25 cents per apple to do this for you. (After cooking, you can use a potato masher, a food processor, or a blender instead of the food mill.)

When this process is done, several amazing things will have happened. First of all, your house will smell incredible. If you are trying to sell your house, make applesauce an hour before the open house and I guarantee you’ll get multiple offers and then there will be a bidding war. The giant satchel of apples that you thought was going to be in a corner of the kitchen for the rest of your life will be gone, and instead there will be a few quart containers of warm applesauce on your countertop. Before you even put any of it in the fridge, dish up a bowl and drizzle over a little cold heavy cream and give that a go, because it is an insanely good combo. If you thought applesauce was only for children, this warm-cool cinnamon meets dairy fat situation will make you rethink it, bigly.

Applesauce will keep in the fridge for at least a week and quite possibly longer. It makes a thoughtful hostess gift but it also makes a great breakfast (with Greek yogurt!). On the off chance that you feel like baking again next weekend, you can simmer it until it is concentrated and jammy and use it in this apple cake recipe.

I don’t think I’m going apple picking this fall, because I don’t want to have another fight with my kid about caramel-coated apples. Instead, I’m going to devote an entire tote to some of this season’s apples from the farmers’ market. I tried the Snapdragon variety the other day—snappy, juicy, a little spicy! Last year I fell in love with the rough-skinned Golden Russet, a hardy type whose tough exterior can withstand nasty whipping winds. I love the flavor of an Empire, but the texture is meh—a great candidate for sauce. There’s concentrated flavor in the Pippin and the Winesap, and even if I find myself with a bruised or mealy one, I know it will end up in a good place.