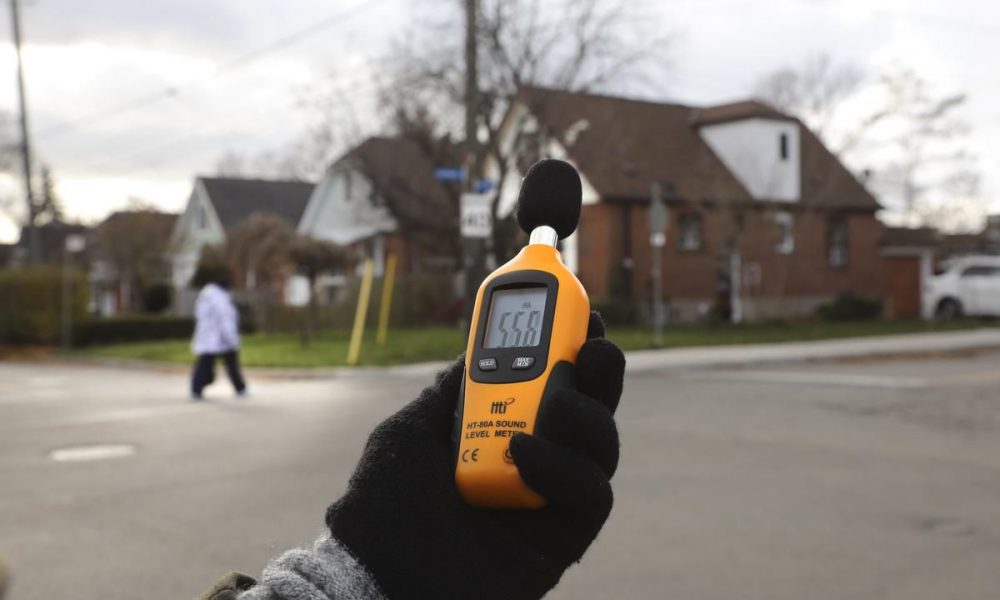 The buzz of a chainsaw, the beeping of a truck in reverse, the thud of a jackhammer. All sounds that have become part of the backdrop of a growing city.

But between certain hours, the residents of Toronto are supposed to get a bylaw-mandated break, unless the city grants an exemption.

And they grant many, many exemptions.

The city is receiving — and approving — more construction noise exemptions, one of the most contested parts of the noise bylaw up for review in the spring.

The exemptions were a hot topic at a bylaw review public consultation this week, which saw about 50 people squeezed into a meeting room at the Centre for Social Innovation Regent Park Lounge to make a little noise of their own.

At the Tuesday meeting, city staff, joined by facilitators from the private firm hired by the city to run the consultations, told the crowd that construction companies send exemption requests to city councillors, who have 14 days to deny them. If they don’t respond, the application is automatically approved.

That’s something condo manager Helen Da-Ponte thinks “should be removed.”

She’s fed up with noise from construction around her building near Queen St. and University Ave. and told a facilitator in a small group breakout session that residents “complain and complain” to the city and “nobody responds.”

“It’s never being followed up. The enforcement is not there.”

Resident Nick Yak, who lives in a different part of the city, suggested flipping it so applications are denied if the councillor doesn’t respond.

“I think that makes more sense,” he said in the same small group session, adding he’s submitted many noise complaints to little effect.

The noise bylaw is clear. Construction noise can only be made between 7 a.m. and 7 p.m. Monday to Friday, 9 a.m. to 7 p.m. on Saturdays, and not at all on Sundays and statutory holidays. But companies can apply for exemptions to do work outside those hours.

Is this the noisiest neighbourhood in Toronto?

How much noise is too noisy? Toronto wants to hear from you

Editorial: Turn down the volume!

Yak finds that “ridiculous,” and said the blanket exemption should be removed.

Paul De Berardis, director of building science and innovation at the Residential Construction Council of Ontario, said in an interview after the meeting the concrete exemption is “vital to keeping production schedule,” as companies might start pouring in the morning and just not be done by 7 p.m.

Getting rid of the concrete exemption and forcing companies to apply for permits would just add “another layer of bureaucracy” in an already complicated process, especially at a time when the city so direly needs more housing supply, he added.

He said other construction noise exemptions are about “logistics and safety” when companies need to do work overnight.

But De Berardis agreed leaving it up to councillors is maybe not the best approach and “could be adversarial” if they don’t want a specific project. A process where Municipal Licensing and Standards decided would be preferable for everyone, he added.

The noise bylaw review began in 2015, with the goal of making it easier to understand and striking a balance between the needs of residents and the growing city.

Two public consultations were held that year, and more in 2016. Tuesday’s meeting was one of five consultations held over the last two weeks.

It was clear residents are weary, with many expressing bewilderment, irritation and even anger over the issue.

Carlo Drudi told the room he’s “living through” a project near his downtown residence right now, and is inundated with “constant loud voices,” “blaring radios,” and “trucks coming at four in the morning.”

He suggested the onus be put on the noise generator by requiring “noise bonds” on projects, which could be lost if workers made too much noise after hours.

Another resident suggested inviting politicians or members of the construction industry to spend a night in the house of someone living near a noisy project; another said the city should set the example and make sure its own workers respect the bylaw.

The suggestions drew oohs, ahs, laughs and cheers from the crowd.

City staff will incorporate the outcomes of this round of consultations into a staff report it will submit along with proposed bylaw changes to the city’s Economic and Community Development Committee in April.

The other consultations looked at noise from power equipment (such as leaf-blowers), vehicles, bars and restaurants, and general noise such as a neighbour playing an instrument.

But construction noise is the biggest source of noise complaints to the city, and they’re also rising. There were 3,845 noise complaints in 2018, compared to 3,468 in 2015, according to numbers presented by city staff Tuesday.

Staff told the crowd that noise mitigation plans for the construction industry are also on the table. This is something that’s already being done in New York City, where contractors are required to make and post them at construction sites to let neighbours know how they will reduce noise.

There were also concerns raised by members of the Toronto Noise Coalition, a residents’ group that has been trying to get a stricter noise bylaw for years, about enforcement, and staffing of bylaw inspectors.

Some laughed while others shook their heads when staff flashed a slide that said the city employs 285 bylaw officers to enforce all bylaws, including noise.

The standard is that bylaw officers respond within five days for construction noise, but between two and 48 hours for animal noise, depending on the risk to animal welfare.

“What’s the point of having a bylaw if you don’t enforce it?” she asked the crowd.