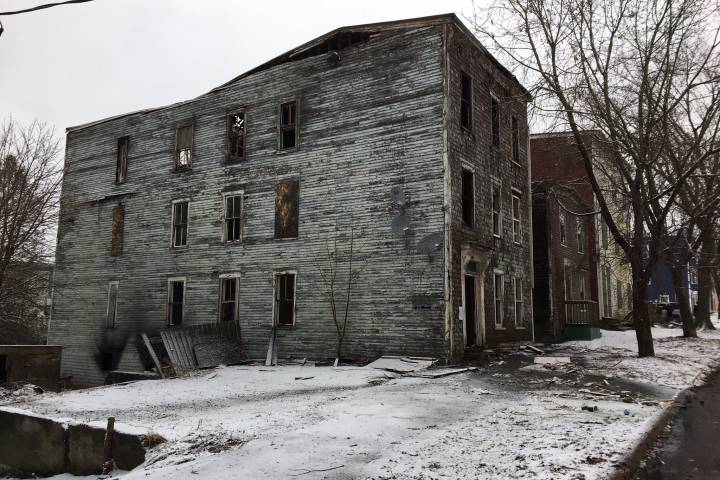 As vacant buildings across Saint John’s old north end come down — either by fire or scheduled demolition — some in the neighbourhood say tearing down is the best chance to clear the way for rebirth.

“Well, they’ve got to come down at some point to rebuild the community. The north end was once a thriving community quite some time ago, so I believe it’s necessary for it to be completely rebuilt,” said north-end resident Matt Allan.

Thirty-three vacant buildings have been torn down this year and another 44 have been repaired, passing the 2018 target of 75 cases. There are approximately 200 buildings that are either vacant or badly damaged on the city’s watch list.

Ward 2 Coun. John MacKenzie shares the opinion that the abandoned buildings need to be torn down to help facilitate revitalization.

“Obviously, if we want developers to come in and do something in this area, we’ve got to clean it up. Nobody wants to put a new building beside three or four buildings that need to be torn down,” he said.

“So phase one, tear them down and clean it up, and then phase two, rebuild.”

Kit Hickey, the executive director of Housing Alternatives, an organization that provides property management and maintenance services for housing co-ops and non-profit housing, says the steps taken by the city to enforce the dangerous and unsightly premises bylaw is helping to restore a sense of safety to the north-end community.

“The city should be applauded on the measures that they are taking to ensure that the vacant, dilapidated buildings are being dealt with in a timely manner,” she said.

“This community has not felt safe as a result of the number of structure fires so it is absolutely essential that the city continues on with the enforcement of these bylaws.”

MacKenzie said the city intends to keep up its current pace of demolitions.

“I think that people are starting to feel a lot safer now because the city is tearing down so many of them and I think we’re getting a good positive reaction,” he said.

“We’re going to continue to do it, we’re going to prioritize and get the ones that are the most dangerous down as quickly as we can.”

But others see a missed opportunity where others see only urban blight.

“I see a whole bunch of lost opportunities everywhere and it’s just a way of thinking about it. Do you think of it as an insurmountable problem?” said Jim Bezanson, who formerly served as a heritage planner for Saint John.

“One option is, yes, tear it down, solve the problem quickly… Or do you go in, look at them, assess them? Sure, if it needs to come down, bring in the crew and dismantle it.”

Bezanson says he’d rather see buildings restored, and if they are too far gone, see them dismantled, allowing for a stockpile of materials to built to assist in repairing or building other homes.

With the right programs and management, Bezanson sees possible opportunities for education through the stripping or repairing of vacant buildings which could then lead to possible employment, and once a building is finished, affordable housing.

Hickey contends that restoration is often too impractical and expensive for non-profits. She added Housing Alternatives looks to get a lifespan of 25-30 years using minor renovations. Where that isn’t possible, investment isn’t practical.

“Based on the experience that we have and the type of development that we do, we need to ensure that we’re going to have a fairly long-term life out of these buildings. The reality for the majority of the building, we’re not going to be able to realize the lifespan of 25 to 35 years,” she said.

“When we look at them, we know that financially, it’s not going to be viable for us to do minor renovations because we’re going to be faced with major repairs in the not-too-distant future.”