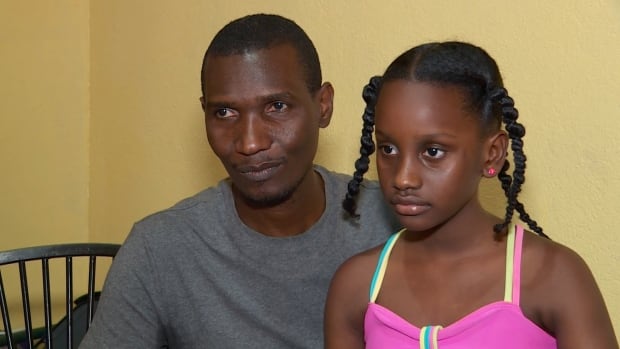 Amid violent protests and civil unrest, the Canadian Border Services Agency halted deportations to Haiti on Friday, offering a temporary reprieve for 421 Haitian nationals still under an enforceable removal order.

Unfortunately this reprieve came too late for Oberne Pierre, a Haitian asylum seeker whose claim was denied after a year of living in Quebec.

Pierre crossed into Quebec at Roxham Road in the summer of 2017, but his refugee claim was denied and he was deported in August 2018.

Canadian authorities determined there was not enough evidence to prove Pierre’s safety was « at risk » in Port-au-Prince, Haiti’s capital. 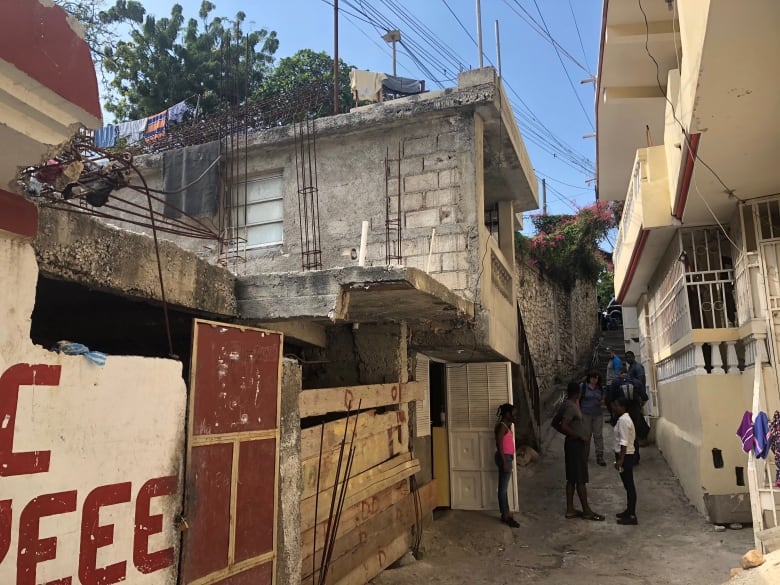 Like hundreds of Haitian asylum seekers who were denied the right to stay in Canada, Pierre had to pack his bags.

Returning to the life he had before has been difficult, especially since getting a taste of what his life could have been.

Pierre’s dream of finding a better future in Canada is over, but he says his nightmare in Haiti is all too real.

He told Radio-Canada that it’s been difficult to access even the most basic services, and finding clean drinking water has been a challenge.

« It’s been three days now that I haven’t found water, » he said, adding that his family only has access to limited electricity and sometimes goes days without it.

The water shortage is affecting millions of Haitians and is linked to the protests. Roadblocks make deliveries of gas to pumping stations impossible, and the government has been using petroleum imports as leverage to try and quell the demonstrations.

« It’s thanks to the grace of God I’m still living. Because I have nothing. No work, nothing at all, » he said.

He lives in a tiny home with a kitchen and bedroom in Pétionville, a suburb of Port-au-Prince. 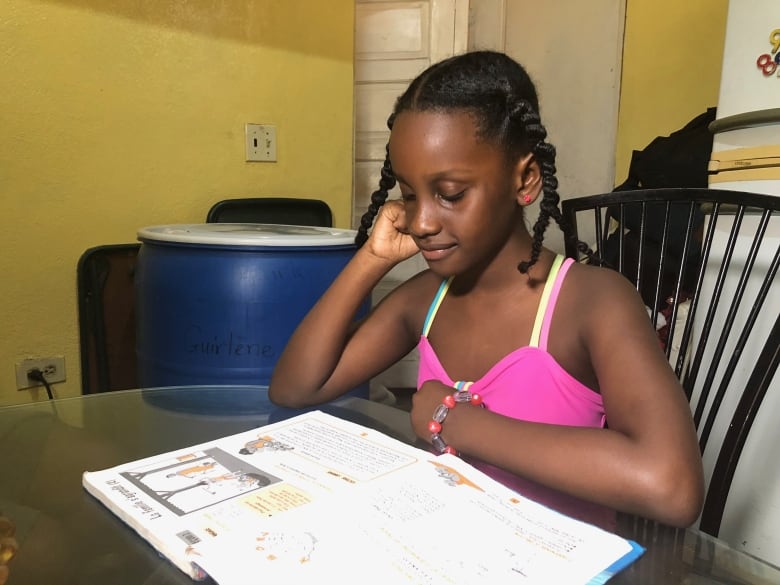 Oberne Pierre said he wants to make a better life for his eight-year-old Tanorah. (Radio-Canada/Laurence Martin)

While living in Quebec, waiting for news about his claim, Pierre worked for a temp agency in Laval and sent money home to his wife and daughter.

Now, he says his hope lies with his eight-year-old daughter Tanorah, who stayed behind with his wife in Haiti while Pierre attempted to claim asylum in Canada.

« I’m going to fight so her future doesn’t happen in Haiti, » he said.

​Frantz André, a Montrealer who has been helping many Haitian asylum seekers through the Action Committee for People Without Status, worked on Pierre’s case and got to know him before the deportation.

André described him as « a gentleman, » saying that « he was the hope of the family since he came here. »

He said taking Pierre to the airport on the day he had to leave was « really painful » and the two still keep in touch every week.

« I’ve called everybody that I know in Haiti who could perhaps give him a job. » said André. « Right now he has not a penny to his name. » 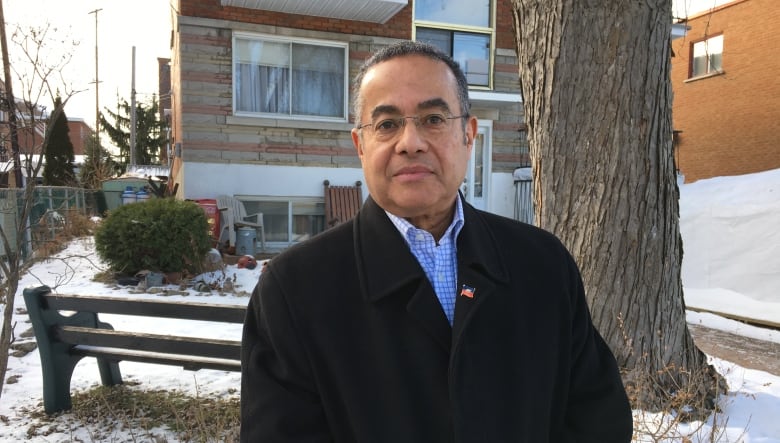 André said that Haitian asylum seekers currently make up the largest proportion of those being deported from Canada.

He said it’s hypocritical that Canada has closed its embassy in Haiti and is advising Canadians not to travel there, but continued deporting people up until Feb. 15.

« Suddenly, because we have a 113 Canadians that are stuck in a hotel, they suddenly have to realize, ‘Okay we better put a moratorium.' »

The CBSA told CBC in an email Sunday that officials are « aware of the situation in Haiti and its impact on persons facing removal » and that the temporary stay on deportations is in effect until further notice. 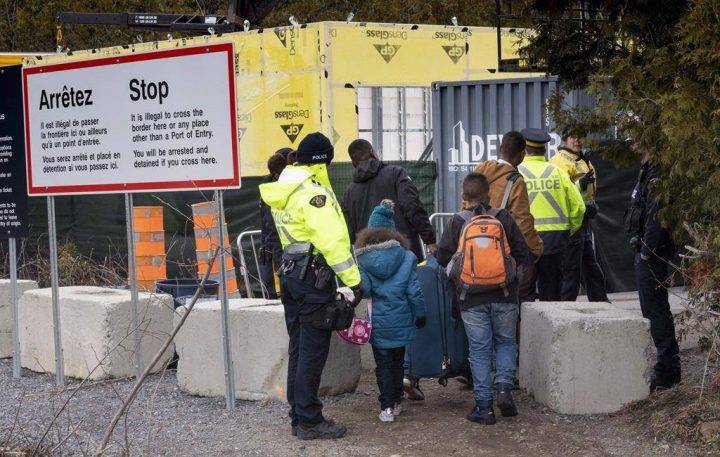 OTTAWA – The number of irregular asylum seekers who crossed into Canada dropped in November to the lowest levels in over a year.


READ MORE:
So far in 2018, CBSA has deported 296 failed irregular border crossers; another 534 ready to go

That was 375 fewer irregular migrants than the previous month and continued a downward trend that began earlier this fall.

It also marks the lowest monthly number of irregular arrivals since June 2017.

The flow of irregular border crossers over the last two years has led to a backlog of refugee claims at the Immigration and Refugee Board, with wait times of close to two years for claims to be heard.

The board has recently launched a task force for less complex cases, which will focus on claims that can be quickly resolved. 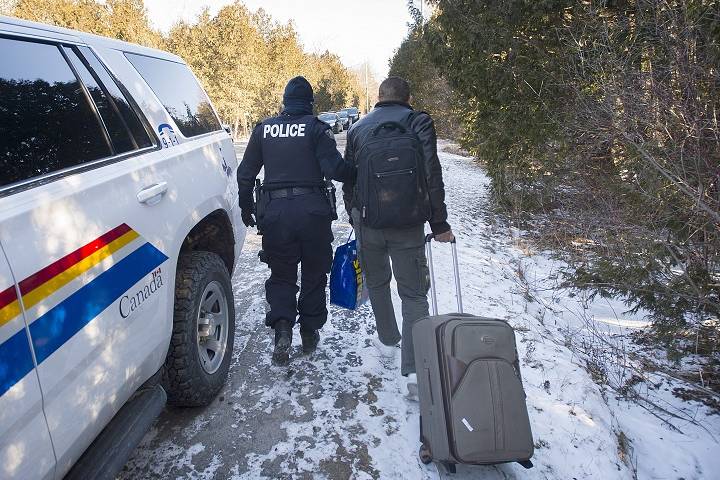 Quebecers living by the Canada-United States border where thousands of migrants have crossed irregularly into the country since 2017 will be eligible for payments of up to $25,000, the federal government announced Wednesday.

Life along the previously sleepy Roxham Road — the main entry point for migrants entering the country on foot — has been disturbed, and residents deserve to be compensated, Border Security Minister Bill Blair said.

“I’ve been there. I’ve spoken to the residents. I’ve seen the level of activity of the RCMP, the Canada Border Services Agency and other officials that has impacted what is otherwise a quiet, rural road,” Blair told reporters.

Roughly 96 per cent of all migrants who have crossed illegally into Canada since 2017 have done so at Roxham Road.

The federal Immigration Department says 16,000 people crossed the Canada-U.S. border illegally into Quebec through the end of October this year, and about 19,000 did last year.

Bureaucrats divided the Roxham Road area into three zones based on proximity to the border. People living in the closest zone are eligible to receive up to $25,000, those in the next closest $10,000, and those in the third zone $2,500.

READ MORE: More than half of Quebec asylum seekers had some kind of ‘legal status’ in U.S. before crossing to Canada

A spokesperson for Blair could not say Wednesday how much the compensation will cost Ottawa.

Conservative party Leader Andrew Scheer said in the House of Commons he worries irregular crossings will become a permanent problem.

“The prime minister needs to stop asking others to pay for his failures,” Scheer said.

Prime Minister Justin Trudeau responded by stating Ottawa is investing $173 million to improve border security as well as to decrease the time it takes to process asylum seekers claims. 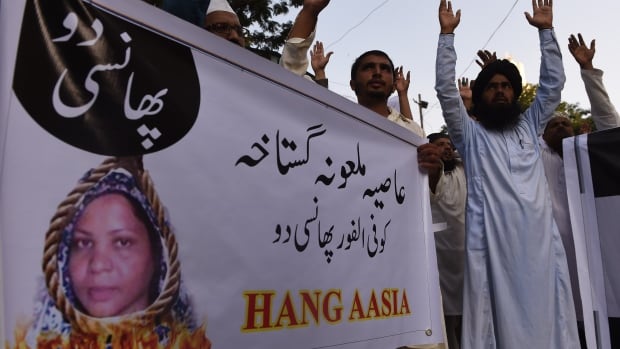 The Conservatives are calling on Prime Minister Justin Trudeau to grant asylum to Asia Bibi, a Pakistani Christian woman who spent eight years on death row for blasphemy.

Bibi, 47, was convicted of the charges in 2010 for allegedly making derogatory remarks about Islam after neighbours objected to her drinking water from their glass because she was not Muslim. The case has divided Pakistan, with her conviction outraging Christians and her subsequent acquittal infuriating hardline Islamists.

She was acquitted Wednesday — prompting the ultra-right Tehreek-e-Labaik (TLP) party to block major roads in Pakistan’s largest cities and call for the murder of the Supreme Court judges who acquitted her.

The protests were called off late Friday after the TLP struck a deal with the government that would see Bibi placed on an « exit control list » to prevent her from leaving the country. A review of the verdict is planned as well.

« Andrew Scheer’s Conservatives are calling on the Trudeau government to use every mechanism at their disposal to offer the Bibi family asylum, and to encourage the Pakistani government to allow Asia Bibi to travel freely in light of recent negotiations with the extremist TLP party which could see authorities bar her from leaving the country, » she said.

Rempel said while the Supreme Court decision in Pakistan to overturn the case is « heartening, » Asia’s life is still at risk as angry mobs have been protesting and calling for her death.

« We know that these are not empty threats as the Federal Minister for Minorities in Pakistan, Shahbaz Bhatti, was murdered in 2011 simply for calling for Bibi’s release from prison, » she said.

« If action is not immediately taken to ensure the safety of the Bibi family, I fear that their lives will also be in danger. »

Bibi’s husband, Ashiq Masih, has appealed to the United States, the United Kingdom and Canada for refuge and assistance.