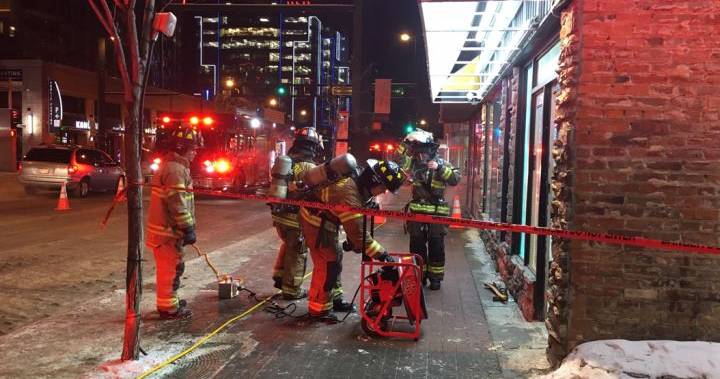 Firefighters closed a lane of downtown Edmonton’s Jasper Avenue on Wednesday night after a fire broke out in a commercial space.

A Global News crew was at the scene at Jasper Avenue and 108 Street just before 7:30 p.m. and it appeared the fire broke out at Spa Shoe Repair.

Firefighters were seen throwing a chair through the business’ glass door to gain access to the building. Smoke was visible at neighbouring businesses as well.

View photos from the scene in the gallery below:

One lane of westbound Jasper Avenue was closed between 106 Street and 107 Street as firefighters worked to put out the blaze.

Firefighters could be seen tearing apart the roof in an attempt to get at the blaze.

About eight fire trucks were at the scene as of about 7:30 p.m. 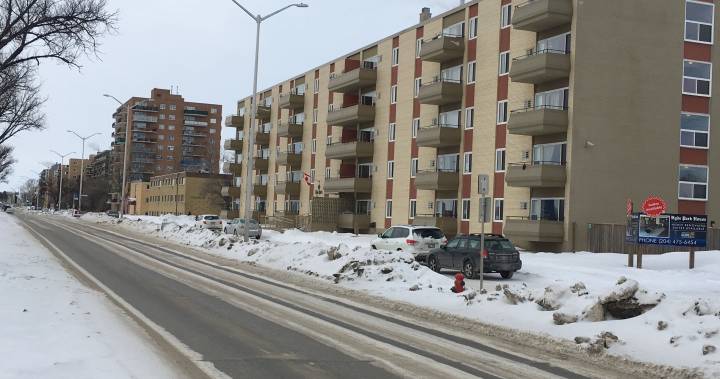 A fire broke out in an apartment complex on Grant Avenue near Cambridge Street early Sunday morning.

Shortly after crews arrived at 5:17 a.m. they discovered smoke and a fire in the basement suite of the building.

Within 20 minutes the blaze was under control, said a City of Winnipeg spokesperson.

Two people found inside the suite were treated for smoke inhalation and brought to the hospital in unstable condition.

The cause of the fire is currently under investigation. 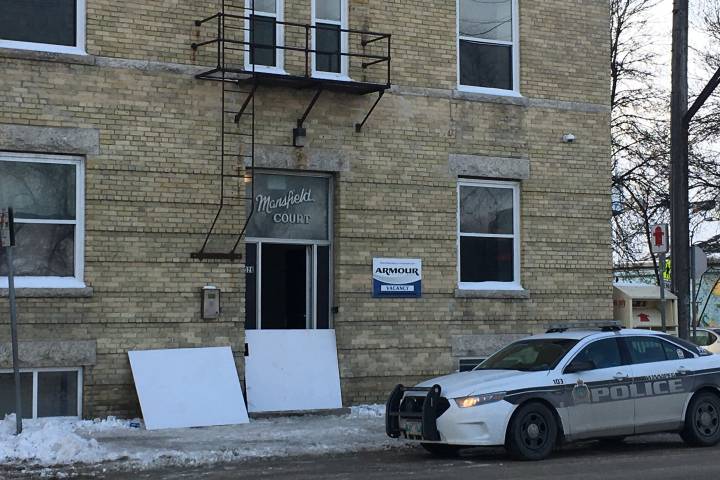 Residents in a three-storey walk-up apartment on Winnipeg’s Ellice Avenue near Sherbrook Street woke up at 4 a.m. Sunday to the sound of a blaring fire alarm.

When firefighters arrived, they saw two people clinging to a window ledge after trying to evacuate the building.

Firefighters quickly used a ladder to bring them down safely.

While trying to extinguish the fire, crews were also searching the building, and firefighters located one individual still inside.

The person was transported to hospital in critical condition and has since been upgraded to unstable condition.

Crews were able to locate and extinguish the fire, bringing the blaze under control by 4:33 a.m.

Approximately 30 people were evacuated from the apartment building.

The City of Winnipeg’s Emergency Social Services team is assisting all of the displaced residents.

A witness at the scene, who declined to be identified, said they were told it would be at least a day before residents would be able to go back inside.

The cause of the fire is still under investigation, and no damage estimates have been made. 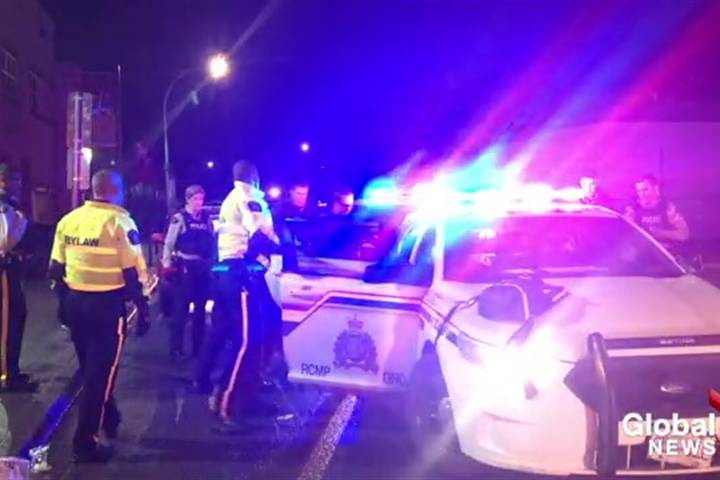 More than a dozen Kelowna RCMP and city bylaw officers descended on Leon Avenue just after 10 p.m. on Thursday night when officers requested assistance to deal with an uncooperative man.

Numerous police officers were seen assisting in the curbside arrest that concluded with the hogtied male being lifted into the back seat of an police car.

The man being held down by police can be heard talking while police restrained his legs and arms.

Police at the scene would not comment on the incident but only said the man tried to fight a police officer.

Emergency crews, minutes earlier, had been called to the Level nightclub at 275 Leon Ave. for a report of a non-responsive male.

RCMP would not say if the arrest was related to the medical call.

The man arrested sustained extensive facial injures, but it is not known when that occurred.

Police were seen speaking with a bouncer at the nightclub as well as others who were called out from the establishment.

RCMP referred comment to their spokesperson who was not readily available.