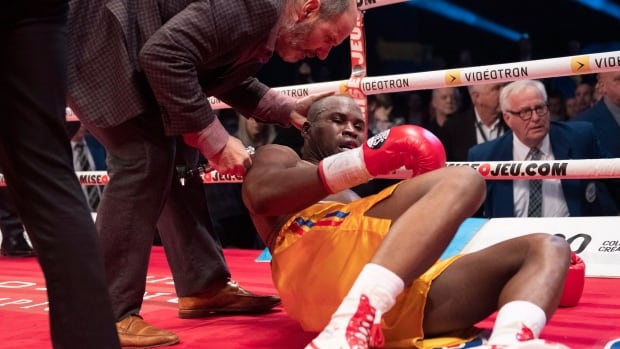 Montreal boxer Adonis (Superman) Stevenson is awake from his coma some three weeks after suffering a brain injury in a fight, according to a statement released by his partner Simone God.

« Despite recent reports being leaked to media, I wanted to clarify that Adonis is awake, » God wrote in a news release sent Saturday evening.

« He is healing from his injury in the private company of his family and his dedicated medical team. Adonis is a world champion in the ring and is exhibiting that same grit, strength and determination in his recovery. »

God added in her statement that she would be taking over « all business related to Adonis as the ‘Superwoman’ he always tells me I am. »

Stevenson suffered a traumatic brain injury in a fight Dec. 1 and has been under treatment in a Quebec City hospital, the Centre hospitalier universitaire de Québec-Université Laval (CHU).

The CHU says it is not yet in a position to comment on Stevenson’s condition.

His girlfriend’s news comes shortly after his promoter Yvon Michel stated on Thursday that the 41-year-old’s condition has not improved.

Stevenson’s condition deteriorated after he was helped into the dressing room following the fight against Oleksandr Gvozdyk of Ukraine at the Videotron Centre in Quebec City.

He was transported to hospital by ambulance and was admitted with a traumatic brain injury that required rapid neurosurgery.

Dr. Alexis Turgeon, an intensive-care specialist, told reporters earlier this month that the majority of patients suffer lasting effects from such injuries.