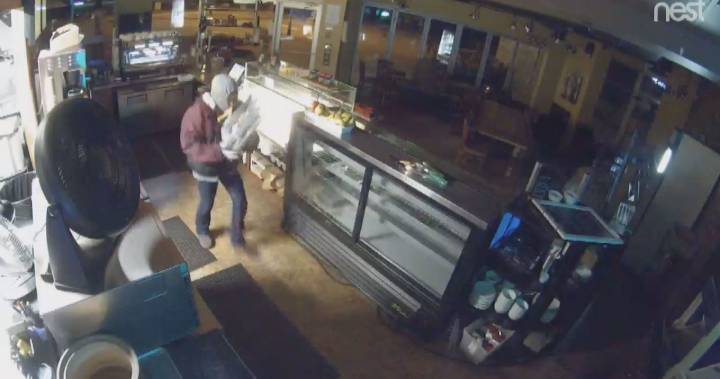 A cookie bandit is on the lam in Peachland, B.C.

Surveillance video shows a thief breaking into Bliss Bakery around 3 a.m. on Jan. 21.

But the thief wasn’t after cash — she wanted a different kind of dough.

“Somebody had punched out the lock on the front door, comes in, beelined for the cookies, ignored the open cash drawer that’s next to them, bundled up four trays of cookies and hoofed it out of the business,” bakery co-owner Darci Yeo said.

“This was a really committed criminal. They knew what they wanted and they had their eye on the ball — or on the cookie,” said Barry Yeo, who is also an owner of the bakery.

Barry said he rushed down to his business when an alarm warned him about the break-in.

RCMP were already at the scene, he said.

“The police are like, ‘Is anything missing?’ And yeah, well, the cookies are all gone,” Barry said.

But it wasn’t exactly a clean getaway. Clues were left at the scene.

“There was a trail of cookie crumbs leading back to the scene of the crime, and there was a trail leading out to the parking spaces because they had a vehicle,” Barry said.

A police dog was called to the scene but didn’t have much luck following the trail of cookie crumbs, he added.

The bandit with an affinity for baking was nowhere to be found.

“I mean, I know the cookies are good, but I don’t think getting a criminal record for stealing them is the way that you want to go,” Darci said.

“I can’t understand why they didn’t go to the till, but I guess that speaks volumes for the quality of Bliss’ cookies,” Bryce Manske, a customer, said.

“We’ve had a lot of comments about how these cookies are a steal,” Darci added.

“We were a little insulted because they left behind the gluten-free cookies,” Darci said. “I felt like they were trying to send us a message or something.”

“They’re obviously not celiac. They seem to know exactly where they were going. I’d say they had the munchies,” she said.

Darci said the theft involved very little damage aside from a broken lock.

“But I would like my trays back,” she said. “The trays for the cookies are hard to come by and a silly price.”

“If they just want to come back, they can drop them off at 4 a.m., no questions asked,” Darci said. “Enjoy the cookies, but I’d like to get my trays back.” 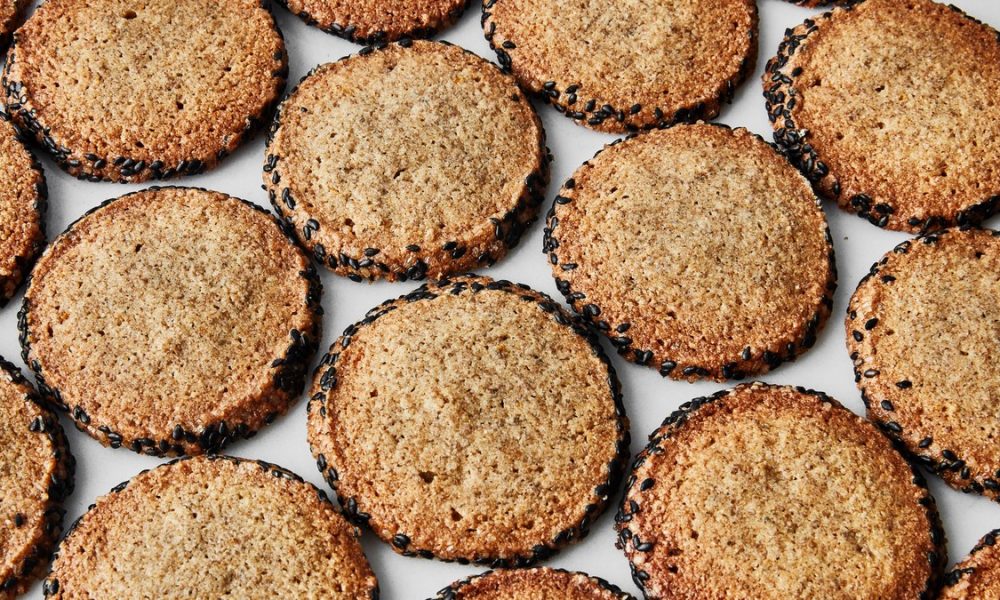 Every Friday morning, Bon Appétit senior staff writer Alex Beggs shares weekly highlights from the BA offices, from awesome new recipes to office drama to restaurant recs, with some weird (food!) stuff she saw on the internet thrown in. It gets better: If you sign up for our newsletter, you’ll get this letter before everyone else.

Where can I get some good bread around here? I asked Sister Pie’s Lisa Ludwinski while I was in Detroit visiting family last week. Well, there’s this guy, Maxwell Leonard, she told me, who doesn’t sell bread from a secret bakery in his house in Hamtramck. She ran into Max at a bar once and bought some bread off of him. This is the kind of guy who might have some spare loaves in his trunk. Which is how I found myself walking up the steps to Max’s house, where a black cat was snoozing on a chair on the porch, and a sign made from butcher paper hung on the door: “This is NOT a bakery.”

It turns out Max, who is Elmore Leonard’s grandson (!!!), is an obsessive. Brimming with nerdy passion. Definitely complying with the state’s Cottage Law, which allows you sell non-hazardous food from your home (sorry, razor-spiked-candy confectioners, not you!). The kitchen was covered in flour. Max was covered in flour. A huge basket held seven loaves of the weekly bread: honey wheat. I bought one of those, two fresh English muffins, and a twisted pull-apart bread stuffed with his homemade sauerkraut. It was all fantastic. (Soon Max will be making the bread at Ochre Bakery, a new spot from the wonderfully caffeinated people who brought us Astro Coffee.)

Elsewhere in Detroit, I got my fix of Jet’s square pizza, where I learned you can order an entire squeeze bottle of ranch dressing for $3 instead of getting three sides (HOW ECONOMICAL!). I had pho from Que Huong three times. We feasted on caramel wings at Flowers of Vietnam, which was everything I’d hoped it was after reading dream hampton’s piece on it; and offal yakitori at Marrow, a new butcher shop-slash-restaurant with a killer wine list from owner Ping Ho. We stopped by Adachi sushi in Birmingham where we introduced my outlaws to fatty tuna, a revelation; we ordered big bowls of split pea soup at Russell Street Deli, where I nabbed a “FAMOUS FOR SOUP” shirt for soup’s biggest fan, Christina Chaey. At Eastern Market, I picked up a mini sweet potato pie from sweet potatoes’ biggest fans, Sweet Potato Sensations. A light and barely sweet Algerian pastry dipped in honey and sesame seeds from Warda Patisserie. Bright pink raw kibbeh at Al-Ameer. And how could I forget! We had even more secret food at Kung Food Market Studio, where chef Jon Kung made us pork and chive dumplings in milky white bone broth, rich in calcium from a pig’s head that completely disintegrates after 48 hours. Delicious. (Order all kinds of goodies by Wednesday, waltz into his studio on Saturday, doggo not for sale.)

Wow, that was a lot.

For EVEN MORE, read our Detroit city guide here!

Halloween costume of the week

Look at this amazing Halloween costume of BA’s own Brad Leone and Claire Saffitz!!! Gahh!!! They even made Oreos!?! Big claps for Angela and Tim!

It all happened so fast. A BOOM, the sound of glass shattering, a small yelp, several gasps. “What was that?!” “Is everyone okay?” “…Amiel?” A glass bottle of what we thought was a chef’s homemade soda turned out to be something fermented and it spontaneously exploded all over Amiel Stanek’s desk and office carpet. Amanda Shapiro was on a Professional Sounding Phone Call and we heard her tell the person on the other line, “Something just exploded so everyone’s freaking out.” Thankfully, no one was harmed—unlike the time shards of glass split Alex Delany’s lip when someone sabered a bottle of Champagne (long story)—so we carried on with our day.

Overheard in the office

“Grunts, slumps, and a whole lot of dump cakes.”

“Basically, it boils down to this: I’m right and he’s wrong.” That’s Adam Rapoport, defending his vision for a “weeknight” bolognese sauce, which was supposed to be a recipe collaboration with Andy Baraghani before a deep rift threatened to tear them apart. “Adam keeps saying ‘weeknight’ bolognese, which isn’t a thing,” Carla Lalli Music told me, “And Adam wants to purée the pancetta. Andy is not going to do that.” Adam already has this broccoli bolognese recipe someone let him get away with—isn’t that enough? This guy is trying to fool TIME and time isn’t having it. “We actually see eye-to-eye on most of the recipe,” said Andy, “This is an ongoing dialogue. We’ll figure it out.” What a diplomat. Recipe…coming eventually!