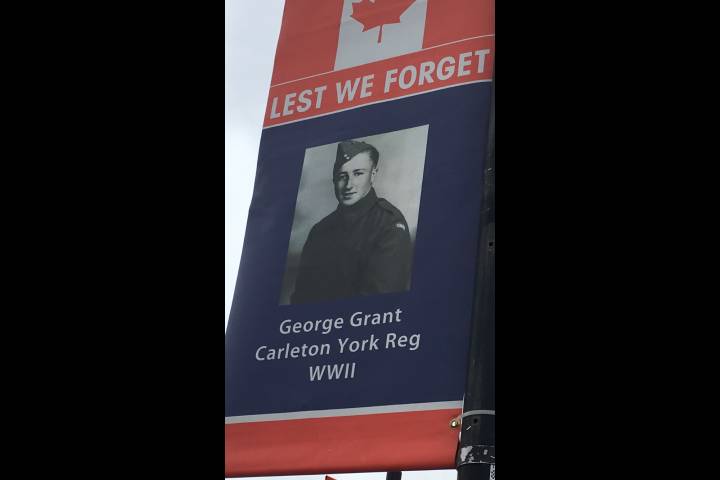 There’s something special hanging from the light fixtures in Woodstock, N.B.’s downtown core: the faces of the soldiers who served Canada, some of whom made the ultimate sacrifice.

“It’s great to be able to put them up. You know you’re doing something to show your respect,” said Gerald Williams, a public works employee with the town.

The banners have the faces of local soldiers, along with information about their regiment and where they served.

Town crews put the remembrance banners up at the beginning of November, often finding themselves hanging the banners of people they hold near and dear to their hearts.

“[There are banners of] my father John and two of his brothers Lesley and Joseph and my uncle George,” said Williams.

The remembrance project was started by a city councillor and former mayor of the town, which is just west of Fredericton.

“People will come down here after hours at night and walk up and down main street at night and look at them with their grandchildren and children and tell them who they were. To me, it’s an act of remembrance,” said Randy Leonard.

The remembrance project has really grown over the last five years with more than 70 banners lining the downtown core.

The families of the veterans sponsor the banner, which goes up year after year. About 75 per cent of the pictures hanging are of those who served in the Second World War but there are some as recent as Afghanistan.

“It’s a real pleasure for me to be able to do this. My dad is on one of the banners.He served in Sicily and Italy and several of these people who are on these banners, I’ve known most of my life,” said Leonard.

The project isn’t unique to Woodstock. The trend is spreading across Atlantic Canada with remembrance banners hanging in St. George, N.B., Sussex, N.B., and Truro, N.S.