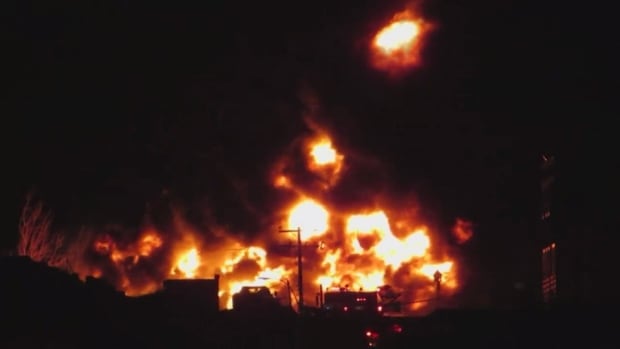 A fire in a used tire yard erupted in Beauceville Saturday night.

Fire departments from Beauceville and surrounding municipalities are still working to extinguish the fire Sunday morning. The fire is now under control, but is expected to continue burning into the afternoon.

Urgence-Environnement and a mobile lab are at the scene to test the air quality as plumes of black smoke cover the city 90 km south of Quebec City.

The fire started around 10:40 p.m. outside the Royal Mat tire recycling plant Saturday but its cause is unknown at this time.

The municipality recommends turning off ventilation systems to prevent potentially toxic fumes from entering their homes.

No evacuations have been ordered at this time.

This is the third fire since 2015 at the plant. The fires used to be much more common a decade ago, said Beauceville city manager Félix Nunez.

« At that time, we counted four or five each year or more, » he said. « Today we have an average of two per year. »

He said that each winter, a large number of tires pile up at the plant. He says he wants to work with RecycQuébec, which supplies the old tires to Royal Mat, to come up with a better plan for tire storage.