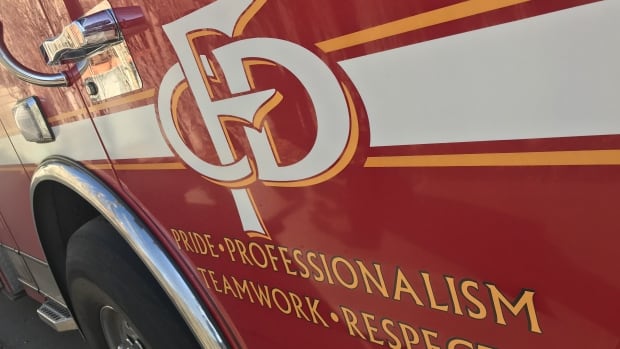 Fire officials say a hair dryer left plugged in created enough heat to cause a can of dry shampoo to explode in a northeast Calgary on Thursday afternoon.

A woman phoned 911 about 1 p.m. to report hearing an explosion on the second floor of her Coral Springs home.

She went upstairs to find a bathroom door had been blown off the hinges and some towels were on fire, which she put out.

When fire crews arrived, they found remnants of a small explosion and fire.

« The bathroom sustained damage to the door, cabinet and bathtub tiles as a result of the blast, » reads a Calgary Fire Department press release.

« The investigation will now focus on the hair dryer to determine any possible malfunction of the appliance. »

The fire department also shared some fire prevention tips, including:

For more fire safety information can be found online. 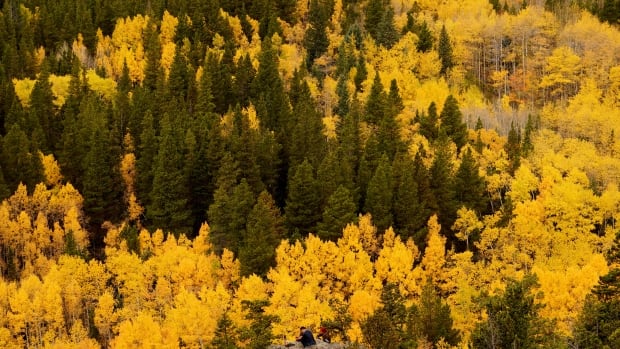 Last year, 12,812 hectares of B.C. forest was sprayed with the herbicide glyphosate. It’s an annual event — a mass extermination of broadleaf trees mandated by the province.

The eradication of trees like aspen and birch on regenerating forest stands is meant to make room for more commercially valuable conifer species like pine and Douglas fir.

But experts say it also removes one of the best natural defences we have against wildfire, at a time when our warming climate is helping make large, destructive fires more and more common.

« It blows my mind that nobody is talking about this, » said James Steidle, a member of the anti-glyphosate group Stop the Spray B.C.

« The experts know this stuff. They’ve known about this stuff for decades, but it’s just not being translated into reality. »

When aspen and other broadleaves are allowed to flourish, they form « natural fuel breaks » if their leaves are out, according to Lori Daniels, a professor of forest ecology at the University of B.C. That’s why aspen stands are often referred to as « asbestos forests » in wildfire science circles.

A forests ministry spokesperson said the government recognizes that aspen and other deciduous trees can help reduce the wildfire threat to communities, and that in the future, more thought will be put into planting broadleaf trees near homes and businesses.

The province’s Forest Planning and Practices Regulation states that when a block of forest is regrowing after a wildfire or logging, broadleaves can’t make up more than five per cent of trees, or two hectares — whichever total is smaller. The concern is that trees like aspen will out-compete conifer species, which are the lifeblood of the timber industry.

If there’s too much aspen, the block must be sprayed with glyphosate, a chemical known more familiarly as the active ingredient in Roundup. Over the last three years, 42,531 hectares of B.C. forest have been treated with the herbicide.

« At the end of the day, we have rules that make fire-resistant trees illegal in our forests. That’s just nuts, » Steidle said.

Aspen naturally thrives after a forest has been cleared by logging or wildfire. Their root systems can survive for thousands of years underground, and they’re capable of sprouting new clone trees as soon as there’s enough sunshine and moisture.

« When you spray a forest, that’s going to last for the lifetime of the forest, » Steidle said. 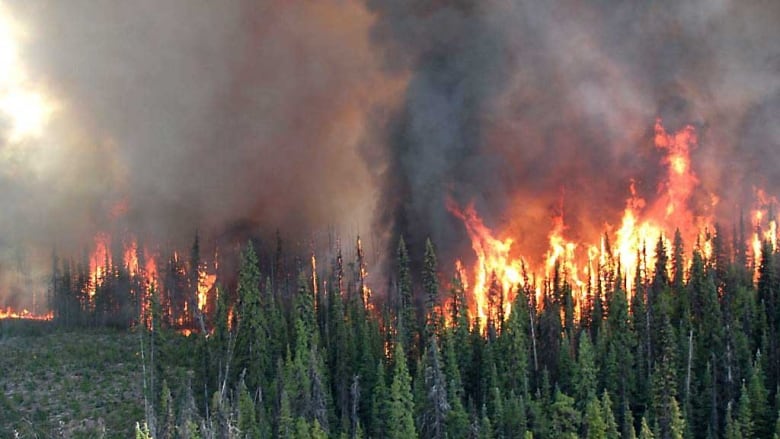 The Shovel Lake wildfire burns through a coniferous forest in the summer of 2018. (B.C. Wildfire Service)

According to Daniels, that’s a major loss in a province that struggling with how to prepare for wildfires after two record-setting seasons in a row.

« When fire is burning through needle leaf forest, it tends to be very vigorous and very fast-moving, » Daniels said. « When fire comes into a forest that has broadleaf trees in it, the conditions change so the fire behaviour is less vigorous and the rate of spread slows down. »

Trees like aspen naturally have a higher water content and don’t usually contain the volatile chemical compounds that can make trees like pine so flammable. They also provide more shade, which creates a cooler, more humid environment in the understory, Daniels explained.

Often, a « candling » wildfire that’s engulfed the crowns of a conifer forest will fall back down to ground level when it hits a clump of aspen.

The research backs that up. One 2010 study conducted by a fire behaviour specialist with the federal government tested the fire-resistance of aspen by doing experimental burns of a forest that was split between conifers and trembling aspen.

Even when there was a « high-intensity flame front » in the conifers — with flames leaping into the crowns of the trees — the fire « failed to sustain itself upon entering the leafed-out hardwood portion of the plot, » the study says. 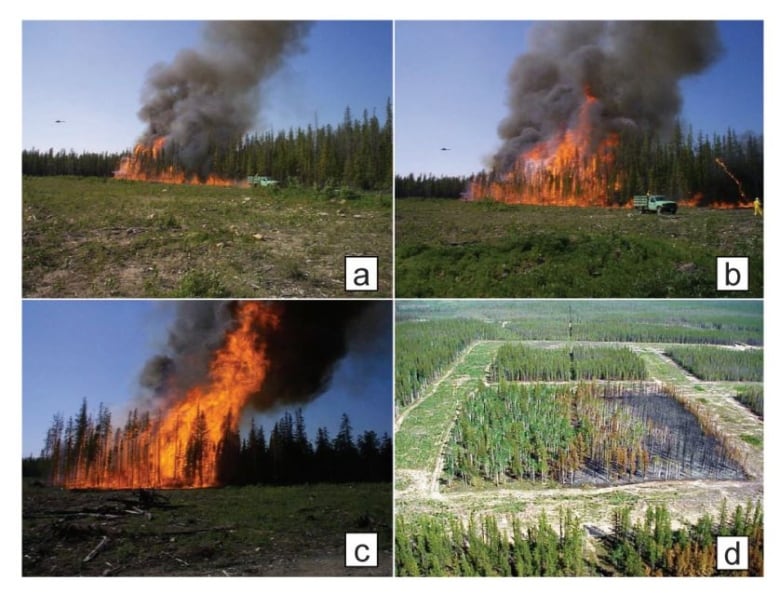 A test burn conducted by a federal fire behaviour specialist shows, at bottom right, how aspen can resist a wildfire spreading through jack pine and black spruce. (The Forestry Chronicle)

Daniels believes B.C. needs to immediately change its forest management strategies to prioritize growth of aspen and other broadleaves.

« We’re still stuck in the vortex where we’re trying to maximize timber production from conifers, and that is causing irreparable harm in our forests, given climate change and the types of changes in forests and insects and fire that we’re witnessing, » she said.

The province has promised it’s updating forest practices as new research becomes available. That includes some recent adjustments to the rules on aspens in the Cariboo-Chilcotin. Because the region is so dry and few aspen can survive anyway, they’re not considered a threat to local conifers and don’t need to be sprayed, a ministry spokesperson said.

But critics like Steidle would like to see a complete end to the use of glyphosate in forests across the province.

« We need to ban glyphosate. There’s no question, » he said. 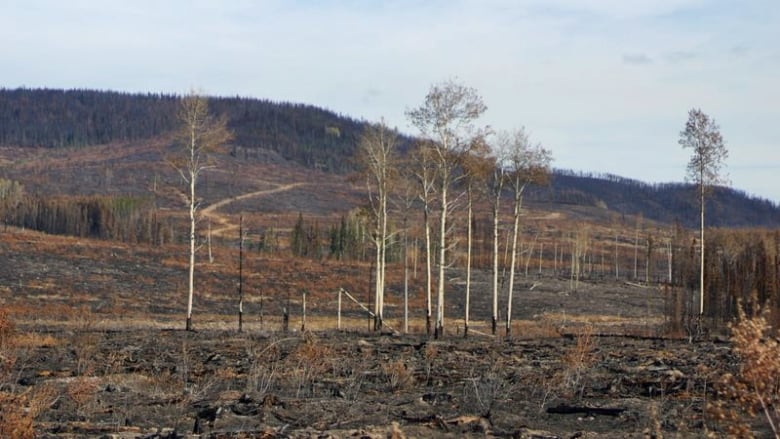 On a recent visit to the area of northern B.C. burned by the Shovel Lake wildfire this summer, James Steidle documented aspen trees that were left standing even though surrounding conifers were incinerated. (James Steidle)

The idea has some political support. Last week, Green Party Leader Andrew Weaver raised the issue during question period in the B.C. legislature, and asked how the province could justify spraying growing forests.

« The result is reduced plant diversity, leading to monocropped forests that are vulnerable to more frequent and destructive wildfires and beetle infestations, » Weaver said.