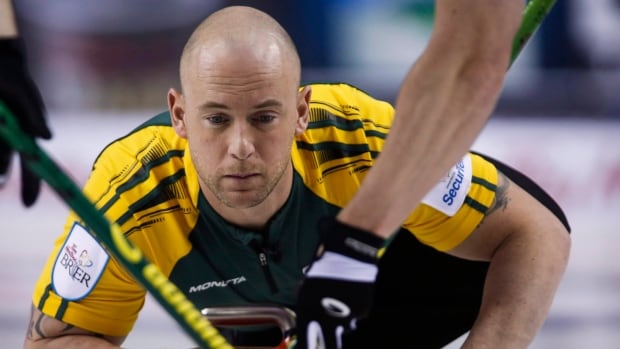 The curling foursome of Jamie Koe, Ryan Fry, Chris Schille, and DJ Kidby was kicked out of the Red Deer Curling Classic on Sunday for « unacceptable behaviour » that included being « extremely drunk. »

The four were ejected from the World Curling Tour event and forced to forfeit their final match.

After receiving numerous complaints from opponents and spectators, the tournament committee at the Red Deer Curling Centre was compelled to intervene.

« They went out to curl and they were extremely drunk and breaking brooms and swearing and just unacceptable behaviour that nobody wants to watch or hear or listen to and it was just ‘enough was enough,' » facility manager Wade Thurber told CBC Sports.

« There was some damage in the locker room and other teams complaining about their stuff being kicked around in the locker room. So at the end of the day, it was like ‘OK, that’s enough of this gong show.’ The committee for the bonspiel collectively decided that we needed to remove them from the spiel for this year and what happens down the road, I’m not sure yet. »

However, a sign was placed on the main board of the arena to make it clear that a decision had been made to remove Koe’s team from the competition and all future events at the club.

« We did that because we had so many complaints from other players and teams, not to mention the spectators, and so we wanted them to know that we did something about it, » said Thurber.

« We had people taking pictures of the sign and also lots of people telling us we did the right thing. When you have people complaining like that, there is a need to do something, right? »

Fry, who is normally a third on Brad Jacobs’ team, was serving as a spare with Koe’s team at the event. He lives in Calgary while the rest of the team curls out of Sault Ste. Marie, Ont., and says a bad lapse in judgment affected the experience for others.

« I would like to sincerely apologize to the fans, participants and organizers of the Red Deer Curling Classic, » Fry said in a statement to CBC Sports.

« I came to the event to play and enjoy the sport. My actions were truly disrespectful and embarrassing — the committee was right to disqualify us from play. »

Fry won gold at the 2014 Winter Olympics in Sochi as a member of Team Canada along with Jacobs, E.J. Harnden, Ryan Harnden and alternate Caleb Flaxey. He’s played in 10 Briers and won both the national title and world championship in 2013.

« I allowed myself to lose control and I offended people with my actions. I wish nothing more than to apologize to everyone individually, » Fry said.

« I will be taking proper steps to ensure this problem can never happen again and I will strive to become a better version of myself while contributing positively to the sport and curling community that I love so much. »

Thurber, who said he « probably did them a favour » by kicking them out, admits he may have worded his notice harshly as far as Team Koe’s future at the event, but said it was important to deliver a stern message.

« Maybe the wording wasn’t quite right on that paper. At the end of the day, we put it up because we wanted all the spectators and the curlers to know that we’ve done something about it, because there was quite a bit of backlash, getting lots of complaints and everyone saying the same thing that we needed to get them out of here, » Thurber said.

« Then people were commenting and saying ‘I suppose they just have to apologize and they’re back in next year.’ So we kind of said it in a way that there’s no guarantee that’s what’s going to happen — an apology may no cut it. »

Thurber added that the event committee was asked by the World Curling Tour to file a formal complaint.