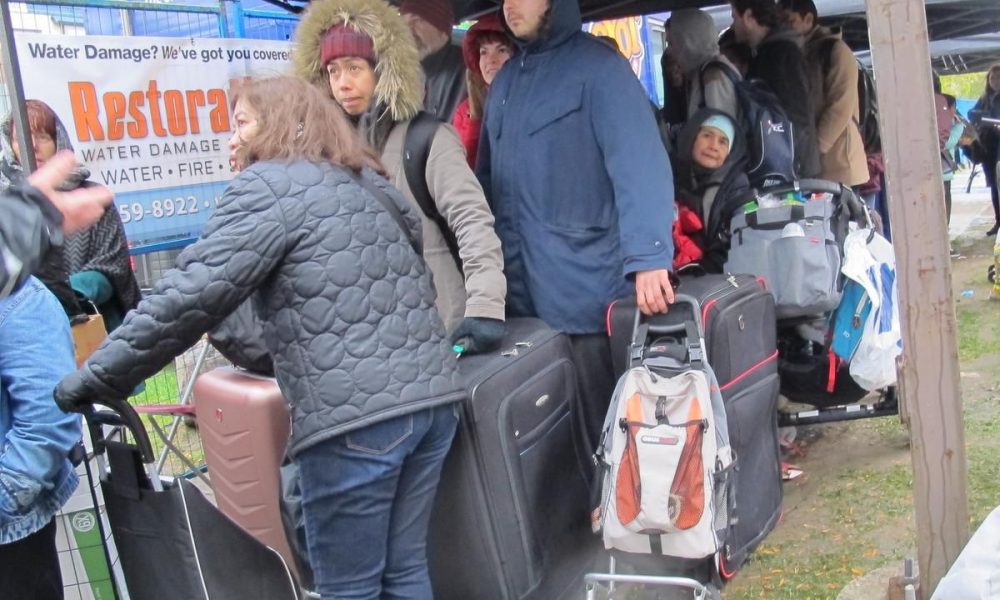 It took more than five hours of waiting and braving the cold and rainy conditions, but Howsan Rashed said he felt all kinds of emotions when he finally got access to his apartment at 650 Parliament St. this Tuesday afternoon.

“My 3-year-old baby was born in here,” said Rashed as he pulled a suitcase stuffed mainly with winter boots, jackets and sweaters for himself and his son. “I’d say I had missed my apartment so bad. It felt good to be back in there and remembering everything about our time here.”

Rashed and hundreds of displaced residents of the St. James Town building are streaming back into the neighbourhood this week to retrieve necessary items from their apartments. The apartment complex has been on lockdown since the Aug. 21 fire that has kept all of its over 1,500 occupants away, as repair work is underway.

Many residents had initially left with simply a few items as they didn’t anticipate to stay away for too long. But last month property management effectively shut down any hopes of returning soon, saying more work needs to be done and it might take until the new year before residents can reoccupy their apartments.

Tenants who want to gain access to the building have to sign a waiver that acknowledges they’re entering the building at their own risk, and won’t sue management if they suffer any injuries or get their belongings damaged in the process.

They said there was a lot of dust all over the place in their two-bedroom apartment, but “thank God” nothing was broken or missing.

Any special sentiment for a place they’ve been away from for a while?

“We have been basically homeless for the past two months. Can’t feel any emotions right now,” said Ali as he and his brother stuffed a boxed-up TV on top of a pile of other stuff in the car.

“Just come in, get stuff and get out of here. Hopefully all this will be over soon and we can return.”

Property management says residents can line up for access into the building all week from 9 a.m. to 5 p.m. But on the second day of the process, many weren’t lucky enough to be called.

“They should employ more people to help run things faster,” said Holly Kwan, who noted she had stood in line for six hours. “How am I going to leave the job again to come back here tomorrow?”

Abhimanyu Sharma said he had driven in from Peel region, where his family has found shelter at a friend’s place after a spell in a downtown hotel earlier in the aftermath of the fire. His wife is set to fly to India next week, and he had come to retrieve the paperwork needed for the trip, in addition to winter clothing.

“Oh God, now it’s more kilometres to drive tomorrow and another day wasted. Too much headache,” he said as he realized he wouldn’t get in Tuesday.

“These last two months we are used to being frustrated, but they need to have more staff and maybe more elevators working inside.”

After a car struck a hydro pole in Mississauga, residents for miles were treated to dazzling flashes of blue and orange light—and then, darkness.

Over 3000 people were briefly without power Wednesday evening following the single vehicle collision, but Alectra Utilities says all the power has since been restored.

A video posted on Twitter showed bright pops of light leading up the blackout, including two distinctly larger flares of light, but Peel Regional Police say there was no explosion or fire. The sparks of light were “the wires shorting themselves when they came in contact with each other,” according to Peel Const. Harinder Sohi.

Police responded to the area of Hurontario St. and Burnhamthorpe Rd. E. around 7:30 p.m. for the report of a vehicle colliding with a hydro pole. There was only the driver of the vehicle in the car at the time of the collision, and they sustained no injuries. Police say there are no charges expected in this case.

Alectra Utilities tweeted just after 8 p.m. that there was an outage affecting 3,259 homes and businesses in Mississauga, stretching from Burnhamthorpe Rd. E. to Dundas St. E. Although the original estimated time of restoration was midnight, Alectra tweeted less than an hour later, at 9 p.m., that all power should have been restored.

Several residents took to social media in that hour to express their frustration, many complaining that they were missing out on the opening NHL game between the Toronto Maple Leafs and Montreal Canadiens.

“What a mess. We’re in the dark here,” tweeted Matthew McGilvery.

Another resident, Kathy DeRodriguez, said she was watching TV “and all of a sudden, darkness.”

Several condiminium complexes were part of the affected area, with tenants reporting no power, even after the power was meant to have returned. After numerous residents of 310 Burnhamthorpe Rd. E. expressed their concerns, Alectra tweeted a response, advising them to contact their “property maintenance to reset the building’s main breakers.”