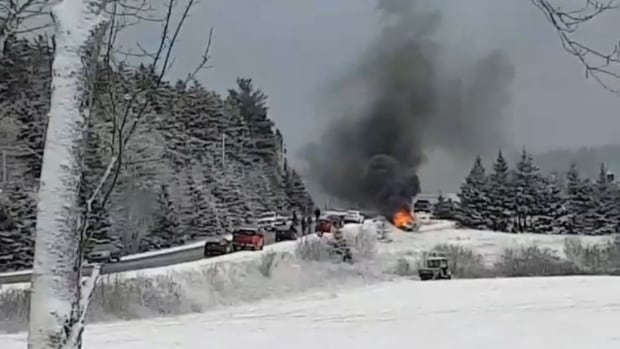 Four bystanders used a muffler to break the windows of a burning vehicle to save the driver inside on Saturday morning in Upper Rawdon, N.S.

Ronnie Densmore was working behind his home at around 11:20 a.m. when he heard a vehicle’s tires spinning out of control on Highway 14.

He looked over, saw a vehicle off the road that was on fire. He hopped on his all-terrain vehicle and headed over.

Densmore joined three other people there to carry out the rescue. He grabbed the muffler that had broken off the vehicle and used it to break some windows.

The other three bystanders then pulled the 30-year-old man from the vehicle. 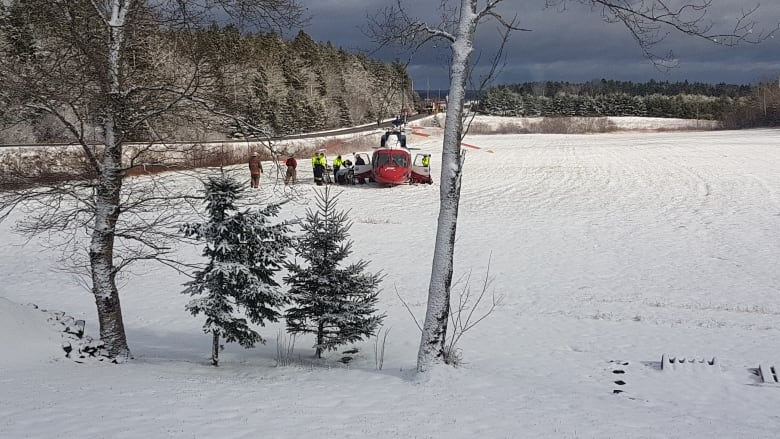 The driver of the vehicle was airlifted to hospital in Halifax. (Submitted by Beth Densmore)

Densmore said first responders arrived in what seemed like no time and he was back home by about 11:50 a.m.

RCMP said the driver was airlifted to hospital in Halifax with serious injuries.

One of the bystanders who helped with the rescue was Richard Dorey-Robinson, of nearby Rawdon Gold Mines. He’s a volunteer firefighter and got a page about the fire.

Rather than head to the fire station, he went straight to the scene, which was about two kilometres away. His brother, James, was also involved in the rescue.

It’s not clear who the fourth person is who helped with the rescue.

‘The right place at the right time’

This wasn’t Densmore’s first time rescuing someone from a burning vehicle. He was a volunteer firefighter for 31 years, but only stopped when he retired and moved from Noel to Upper Rawdon.

He said the experience brought back the feeling of adrenaline he encountered on so many other rescues.

« It feels good you were able to help somebody, being in the right place at the right time, » he said.