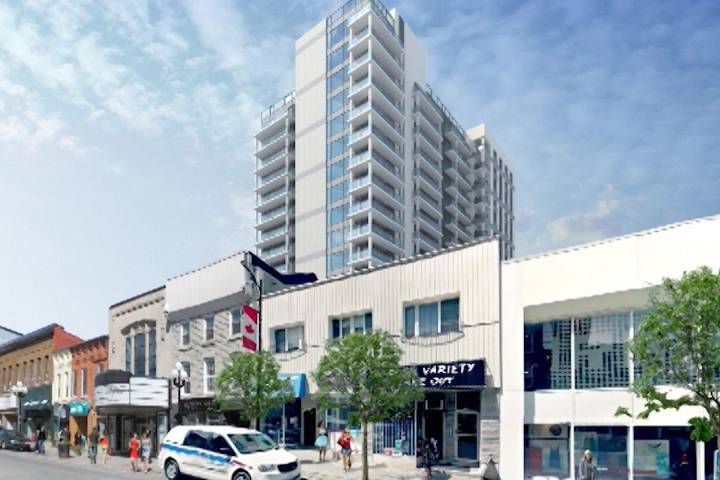 A 16-storey condo development in the heart of downtown Kingston was in the works, but after a growing number of concerned citizens rallied against its development, the project has been shut down by the Local Planning Appeal Tribunal.

“We are disappointed by the LPAT decision and deeply saddened by the far-reaching ramifications this will have on the long-term viability of downtown Kingston,” said Darryl Firsten the developer of Capitol Condo after the decision was made.

The group of concerned citizens appealed the plans for the development with the Ontario Municipal Board (OMB) in April, arguing that the 16-storey height did not meet the guidelines with the city’s official plan and zoning bylaws, which calls for a four-storey maximum on Princess Street, and a six-storey limit on Queen Street.

The decision was released on Friday, Nov. 10, by the Local Planning Appeal Tribunal, which replaced the Ontario Municipal Board (OMB) in April, to whom the appeal was originally filed.

As previously reported by Global News, those who appealed the project worried that the height of the new condo building would mar the historic charm of Kingston’s downtown core.

“We are especially sorry that the system has let down a lot of upstanding Kingston citizens who desired to live in this iconic building,” said Firsten.

He went on to say that this will have lasting impacts for merchants in the area, who he says, will continue to struggle because they need more people living downtown.

In the tribunal’s decision, adjudicators unanimously agreed that “the downtown and harbour area of Kingston is a remarkable urban artifact and one of Canada’s most well-preserved heritage areas.”

Kingston Mayor Bryan Paterson told Global News that he thinks there is still a commitment to residential intensification in the downtown and that he wants to understand what the issues are so he can respond to them and get the necessary developments built.

Firsten told Global News via email that although the outcome of the LPAT decision is not what they were looking for, it did contain a lot of positives about the project.

“The tribunal was quite pleased with all other elements of this plan, with the exclusion of the compatibility of the height,” said Firsten.

“It’s unfortunate that the ideas of a small group of residents, many of whom don’t even live downtown, has had such a profound impact on the future of the city for everyone.  We commend their passion and love for the city, but loathe their comprehension of good urban planning and economics.”