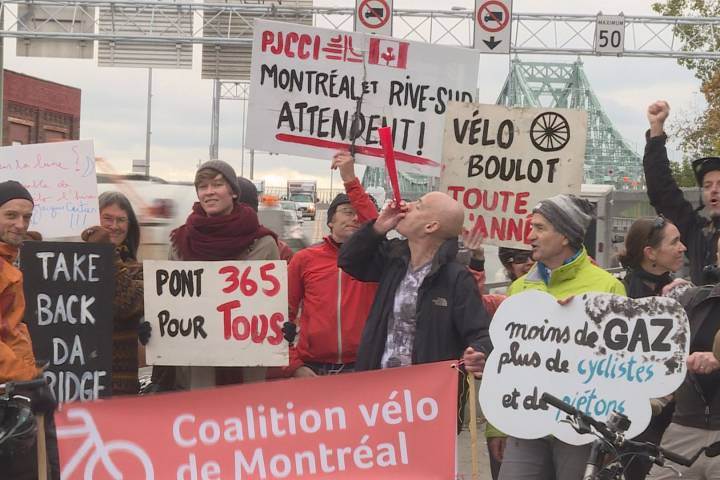 A group of cyclists gathered at the foot of the Jacques Cartier Bridge on Saturday morning to protest the closure of its bike path for the winter.

“There’s about 4,000 a day in the summer who depend on this bridge because it’s the only cycling link between the South Shore and Montreal,” said Daniel Lambert of the Montreal Bike Coalition.

Many of them don’t want to lose the convenience of the bridge during the winter because cycling is good exercise and presents an alternative to driving, Lambert says.

“Especially with all the traffic congestion caused by all the construction projects, including the Turcot and the Champlain Bridge,” he tells Global News.

But the Jacques Cartier and Champlain Bridges Incorporated, the Crown corporation that runs the bridge, says the structure is unique.

“It’s a concrete slab,” explains spokesperson Nathalie Lessard. “It’s sitting in the air; it’s exposed on all four sides to the weather conditions.”

She points out that because the bridge is not insulated by materials like those under a road bed, even if the company keeps it clear of snow, there’s always a risk of black ice.

Protesters agree that it’s fair to close the bridge when conditions are bad but argue that its bike path should be kept open otherwise.

The problem, according to bridge officials, is that black ice is hard to predict.

This was the conclusion reached after the company conducted a study earlier this year to find a way to keep the path open, Lessard explains.

“We looked at different options for snow removal and de-icing products but to date we haven’t been able to find a viable and safe solution,” Lessard says.

Other problems include falling ice from the superstructure and the narrowness of the bike path.

“We have learned how to cycle,” says Lefrancois. “Even for the drivers of the cars, it’s not safe in the winter. You have to learn how to drive safely.”

Montreal mayor Valérie Plante also tweeted her disappointment about the wintertime closure of the path.

Montreal Mayor Valérie Plante tweeted her disappointment that the multipurpose path on the Jacques Cartier Bridge will be closed for another winter.

Bridge authorities say they plan to do further studies, but for this year they expect to close the path sometime in December or as soon as the weather dictates.