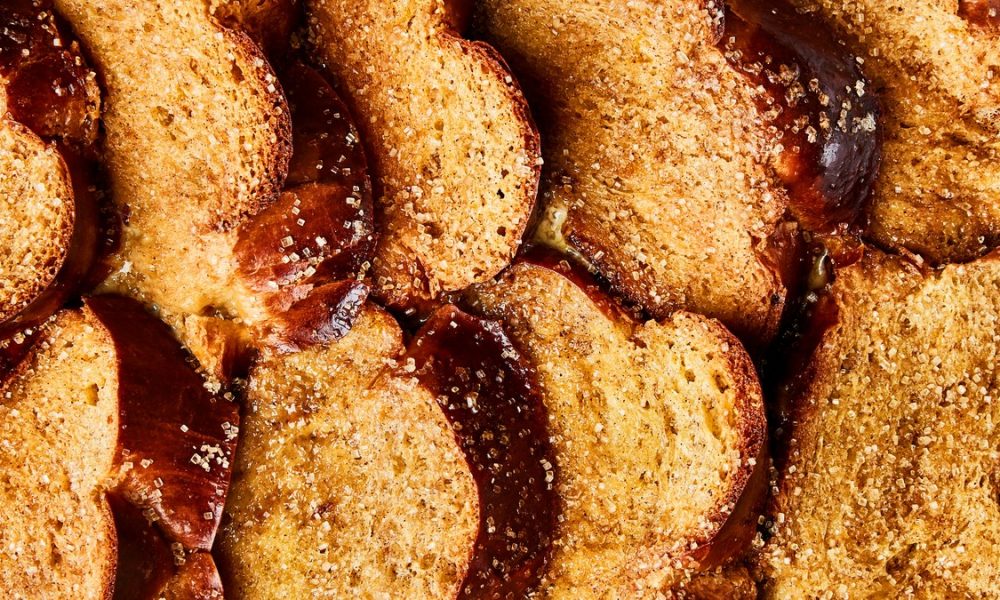 ‘Twas the night before Christmas, when all through the house, not a creature was stirring, except whoever hasn’t wrapped their presents yet. Someone already breaking into the eggnog. Someone on the phone with FedEx because the ergonomic socks they ordered never arrived. Mom, freaking out. Dad, freaking out. Kids bouncing off the walls tracking Santa on some bogus website sponsored by Big Candy. NO ONE IS SNUG. IT IS CHAOS.

Except your overnight French toast, all comfy in the biggest casserole pan you own, covered in custard, waiting patiently to be unwrapped for breakfast the next morning. Take a photo with it in your jammies, send it to @mollybaz and say, “Thanks for the overnight French toast, I’m going to wear it all day! It fits perfectly! I love it!”

This recipe is your holiday feeding-a-boatload breakfast solution, all of the prep takes place the night before serving, and that prep is: slicing and toasting bread, mixing some eggs with milk and cinnamon, and assembling a shingled masterpiece, and shoving it in the fridge. The day of, you pour some butter on top and bake. And hey, it works for all kinds of crowds, not just Hallmark movie family unit clichés. I made it recently for two of the people I will spend Christmas with: my boyfriend and my great aunt. We ate ALL OF IT. The recipe feeds six. IT WAS SAVAGE.

A few details guarantee a French toast better than most:

The bread: Use challah or brioche. Those eggy breads will soak up the custard like a sponge. However, you MUST toast the bread (in the oven) first so that when it gets covered in liquid it keeps its shape and doesn’t get soggy and gross. So yes, you need to turn the oven on, but maybe it was already on for some cookies or something?

That’s pretty much it, honestly. You smush the bread under the custard with a spatula, then soak it all overnight (make room in the fridge! This can also just be for two hours!), cover with melted butter and coarse sugar in the morning, and bake it for half an hour until puffy, golden, and crispy around the edges. The pieces on the bottom of my casserole were pudding-like and gooey good, the pieces on top were crispier like cinnamon toast. A bite that combines both is sensational. Now let’s get to the presents. 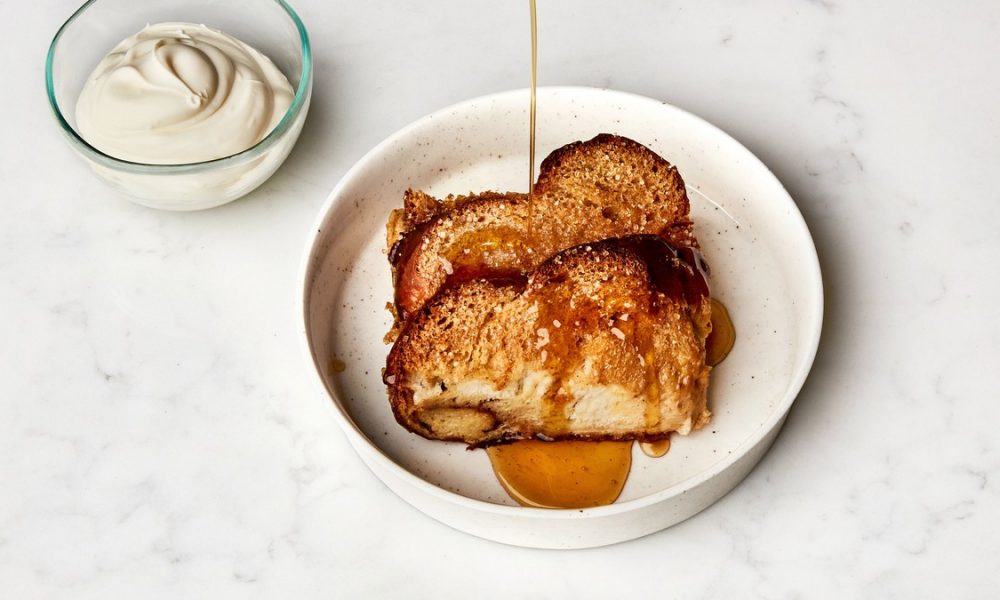 Place a rack in top third of oven; preheat to 325°. Let bread sit out at room temperature while oven preheats, at least 30 minutes. Uncover pan, tilt, and ladle custard back over tops of bread. Press down once more to submerge. Brush tops of bread with 3 Tbsp. melted butter. Sprinkle with demerara sugar. Bake bread until it is lightly golden, puffed, and pulling away from edges of pan, and butter is bubbling, 30–40 minutes. 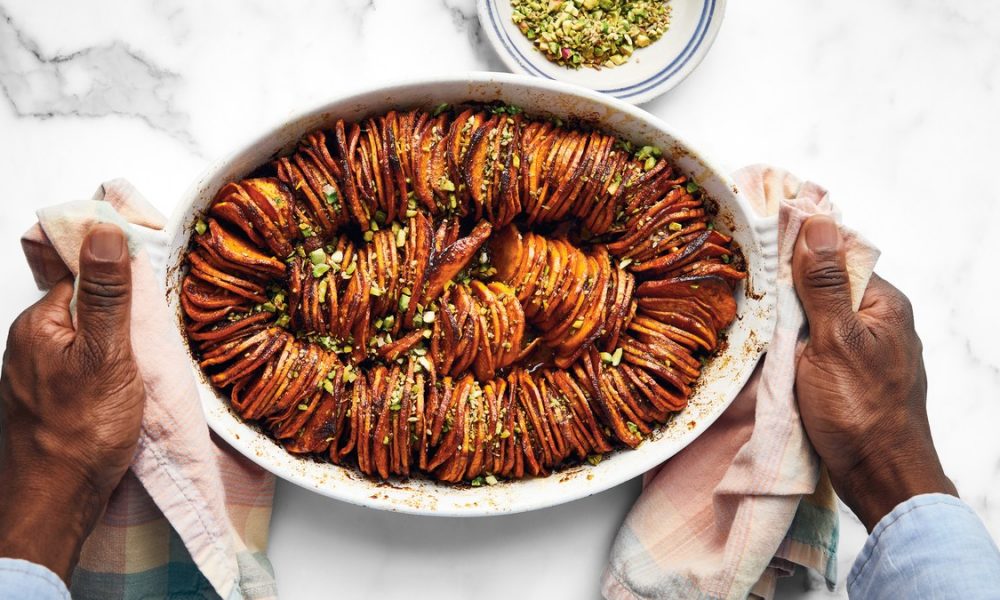 The most divisive food decision at Thanksgiving isn’t white meat or dark meat, pecan or pumpkin, stuffing inside or outside the bird. It’s if your guests are Team Sweet Potato With That Marshmallow Topping Situation or well, not.

Here’s a couple things we should hopefully all agree on:

Enter, shingled sweet potatoes with harissa. Putting taste aside for a second, this is a superior sweet potato aesthetic—layered discs of sweet potatoes nestled close together to create the perfect messy-chic arrangement. It looks like something that takes a long time to put together, even though the mandoline really does most of the heavy lifting. You peel the potatoes, slice on the mandoline, and then stack ‘em like coins on their side in concentric circles.

This particular recipe leans a bit spicy thanks to a mixture of harissa, olive oil, and white wine vinegar. And, the dukkah (a mixture of pistachios, sesame seeds, and fennel seeds) add a nice crunch. It’s simple, it’s flavorful, it works.

But, if you’re really feeling the Thanksgiving spirit, you could use this as a (very good, rigorously tested) template more than a must-follow. As in, shingle your sweet potatoes with whatever fat you like, plus any spice combination your heart desires—just make sure there’s enough oil to keep the potatoes from drying out in the oven. And, as the recipe instructs, check on them every 15 minutes to brush any accumulated oil in dish back onto the sweet potatoes.

When it all comes out looking toasty and impressive, you’ll forget there was ever any other way to cook them. And your guests? Well, they won’t even miss the marshmallows. Sorry, marshmallows. 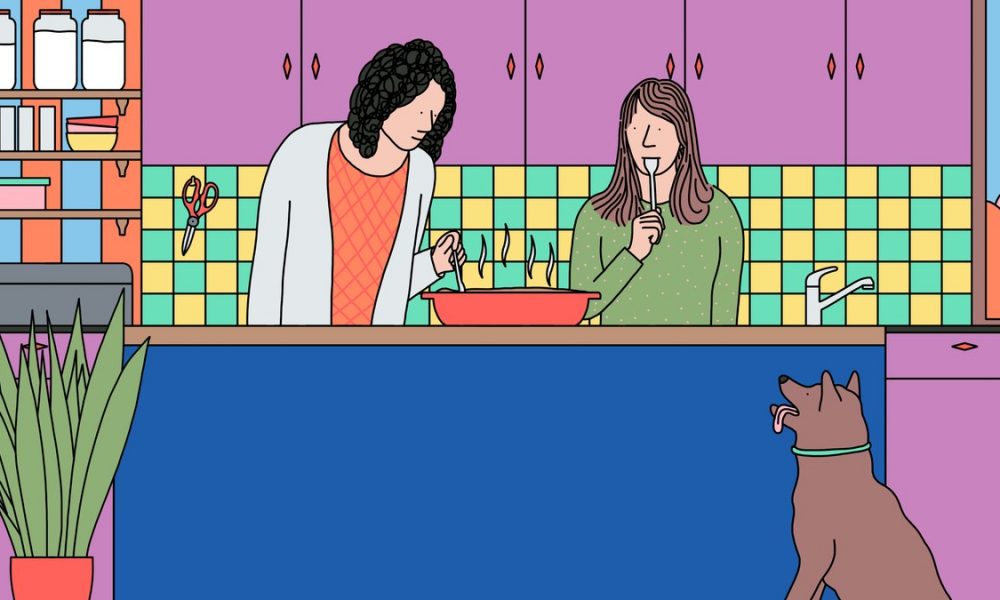 For as long as I can remember, one dish has risen above all others at the Cadigan family Thanksgiving dinner table. No, it’s not turkey. (Of course it’s not turkey.) It’s my mom’s cornbread casserole, the tastiest dang thing and also the easiest to make, provided you avert your eyes while combining a box of Jiffy corn muffin mix with an entire stick of butter, a cup of sour cream, and a can of creamed corn.

Pull it hot from the oven and its surface resembles a picture of the sun close up, all gilded and crackly, with shallow golden butter craters and dark blotches where the crusty top toasted just so. Cut into it—all you need is a spoon, or you can just stick your whole hand in there—and it gives way like a heavy cloud, the interior moist and dense and studded with fat blond corn kernels. Just robust enough to chew yet soft enough that you don’t really have to. Butter and bread melded into one.

When I was a kid my family moved around a lot: I’d made my way kicking and screaming through the suburbias of Dallas, Chicago, New York City, and Boston by the time I turned six. Despite our many moves, Thanksgiving remained blessedly consistent: turkey with gravy and two types of cranberry sauce (the jelly kind that retains the shape of the can for my dad and the kind with actual berries in it for my mom), stuffing, biscuits, mashed potatoes with a molten butter center affectionately referred to as the “butter surprise” (we really love butter), green beans with mushrooms and crispy onions, a gelatinous pot of peas, and the hallowed cornbread casserole. No deviations; no substitutions.

Deep into adulthood I’d make my mom’s cornbread casserole for potlucks, revel in the praise, and share the many-times-forwarded family recipe (adorably modified in the early aughts to include “one cup Mum’s love”). When I lived in northern Thailand, I dutifully re-created it three years in a row, even though the process involved spending 20 times the price of a box of Jiffy mix on imported ingredients. Slowly but surely I widened the casserole’s circle of influence, bequeathing this Cadigan family original onto the people of the world. Sure, its primary component was a boxed mix, but the recipe was special because it was ours. Or so I thought.

Then, one day not so long ago I was asked to write an essay (this essay) about my strongest Thanksgiving food memory. So I did some googling. And suddenly, boom. I was faced with a shattering piece of knowledge: My most prized culinary heirloom can be found on jiffymix.com.

“We’ve heard lots of stories like this, Hilary, if it helps lessen the pain and the anguish and the broken trust factor.” I’m on the phone with Howdy Holmes, the 70-year-old patriarch who now holds the keys to the Jiffy mix empire, which began with his family’s Michigan flour-milling company back in the 1800s. “You wouldn’t believe how many times somebody’s called me up and said, ‘I’ve got a really great recipe,’ and it’s the spoon bread casserole.”

Holmes isn’t sure who first came up with this so-called spoon bread casserole. Its earliest documentation was as a tear-off sheet mounted to grocery store shelves in the 1950s; it was then known as “corn bowl.” Around 1970 the recipe was featured in the official Jiffy recipe book, and today it’s on Jiffy’s website for all to search and find.

I decide to confront my mom. She claims innocence. “I got the recipe from a friend! I thought it was hers!” She pauses a moment. “Come to think of it, though, I’m pretty sure just about every one of our Thanksgiving recipes came from the side of a box or a can.”

For a second I feel cheated. Like something precious has been stolen from me, or worse, was never mine in the first place. Then we both start laughing and can’t stop. In my head unfurls a sizzle reel of all the memories this calorie-loaded casserole had provided over the years: doling out second portions for my late great-aunt Theresa, a Catholic nun who’d scold us for forgetting to pray before eating; cooking with my mom while speaking exclusively in British accents (it’s our thing); my boyfriend, Rob, burning off every eyelash trying to bake the casserole in a rusty old pizza oven at a Thai bar (he persevered; we’re engaged now).

These memories belong to me, even if the recipe doesn’t. And there’s something kinda warm and fuzzy in knowing that, for the better part of a century, thousands of other families across the world have been making it too. Like we’re all sharing one big ol’ corn bowl of collective memory.

Plus, the Cadigan version contains twice as much butter.