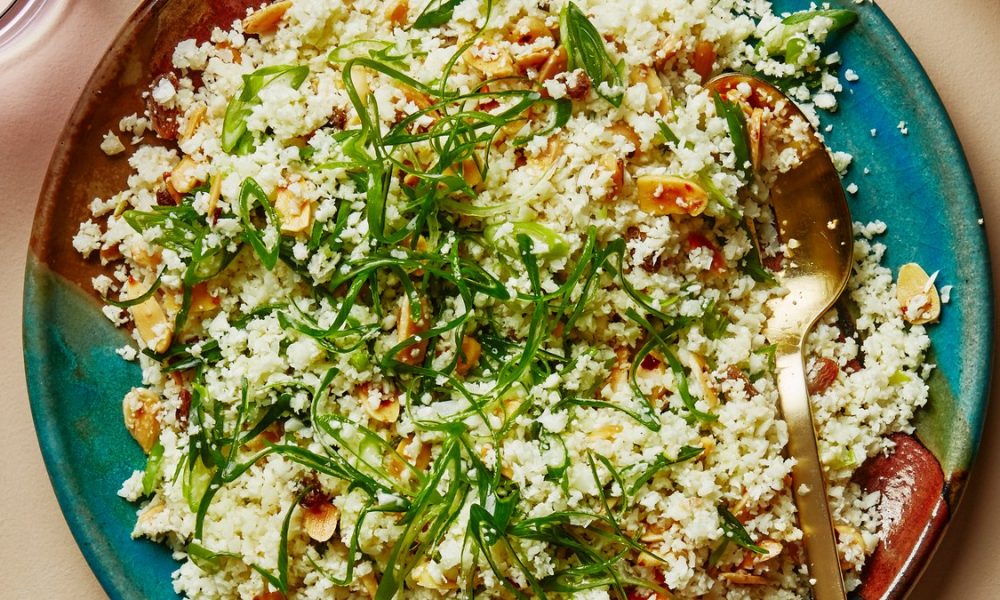 Despite my very best intentions, I’ve always found cauliflower rice to be a bit of a disappointment. There’s nothing exciting about eating a bowl of mush, especially when there is actual rice to be had. I’ll admit to a few flirtations with Trader Joe’s frozen cauliflower rice several years ago, but that relationship ended when I realized I’d rather be eating my cauliflower pretty much any other way—especially roasted in a blazing hot oven until each floret is caramelized and crunchy. Then Lauren Schaefer developed a cauliflower rice pilaf that showed me the light.

Schaefer’s weeknight-friendly recipe taps a few key ingredients—sliced almonds, golden raisins, scallions, ground cinnamon—to give riced cauliflower that much-needed makeover. “It’s the same principal with salads: You want something crunchy, something salty, and something fresh,” she says. “I see cauliflower rice in everyone’s carts at the grocery store, but I feel like it’s something you eat alone—but I think anything you eat by yourself, you should feel proud to eat with other people.” You can turn a plain old head of cauliflower into “rice” by pulsing pieces in a food processor, but I live in a New York City apartment with minimal counter space (read: limited appliances), so I just bought it pre-made at Trader Joe’s. It was time to give those frozen bags another chance.

The makeover began by toasting sliced almonds in a pool of ghee. The rich, buttery smell gave me hope. These nuts should be golden brown, not burnt brown, so I took them off the heat as soon as they started to look golden and let them finish cooking as they cooled. Then I added cinnamon and red pepper flakes and poured the whole delicious-smelling mixture into a big bowl. Next I heated a bit more ghee in that same pan, sautéed some sliced scallions and golden raisins, and added the cauliflower. A little steam released, no biggie, but soon the aromatics and cauliflower became one harmonious mixture. I poured the whole thing into the big bowl and tossed until the cauliflower rice was completely coated in spiced ghee. Then I topped the pilaf with sliced scallion greens and took a bite. Just like that, I was a cauli-rice convert.

The buttery blend of warming spices coated each cauliflower crumb, which were studded with toasty shards of almonds and sweet pops of chopped raisins. It was a supremely comforting bite. I decided to serve the pilaf with homemade yogurt flatbread (I’m clearly not trying to give up carbs) and quick-pickled cucumbers, but I’m already planning to serve it with a roast chicken for an easy dinner party. It’s a vegetable dish and a starchy side all in one—plus I’m itching to share this cauliflower rice treatment with my friends. It’ll make them believers too.

Give cauliflower rice a chance:

The seasonings and accompaniments for this cauliflower rice recipe are adaptable based on what you find in your cabinets. Try currants instead of raisins, finely crushed walnuts instead of sliced almonds, and ground ginger or garlic instead of the cinnamon. 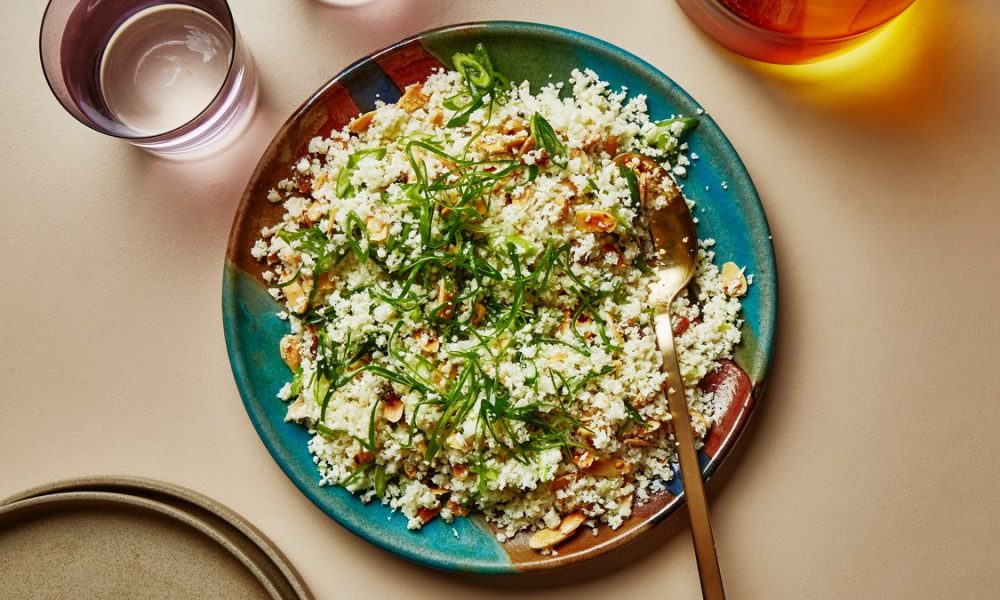 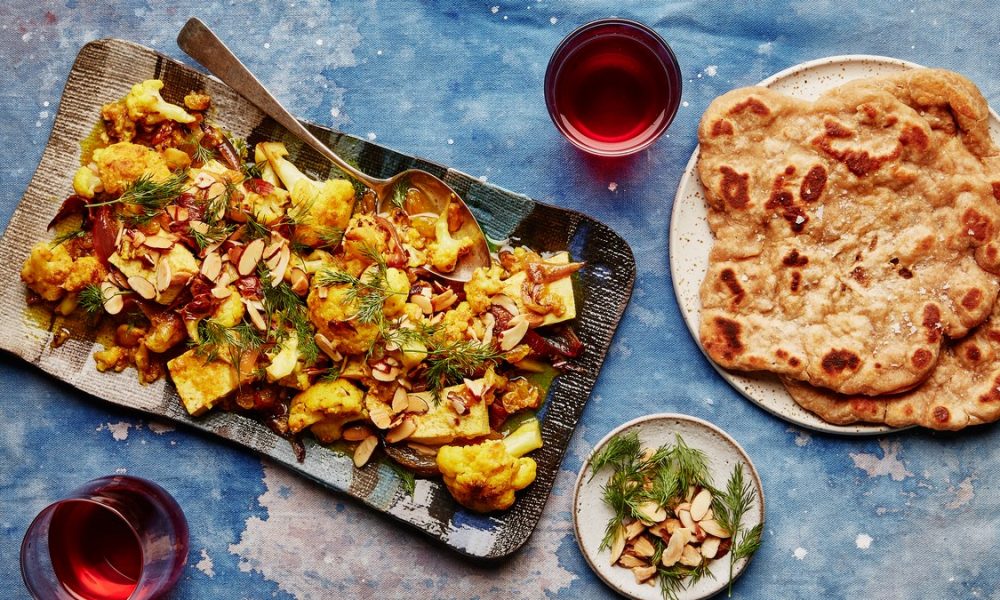 Heat 1 Tbsp. ghee in a large Dutch oven or pot over medium-high. Add cauliflower in a single layer and cook, undisturbed, until golden brown underneath, 4–5 minutes. Toss and continue to cook, tossing occasionally, until still crunchy but browned in spots, about 4 minutes longer. Add onion, garlic, and remaining 1 Tbsp. ghee. Cook, tossing occasionally, until vegetables are halfway to tenderness, 8–10 minutes longer. Season generously with salt and pepper, then add ginger and turmeric. Cook, stirring constantly, until fragrant, about 1 minute. Add tofu, raisins, and 1 cup water. Bring to a simmer and cover. Cook, partially covered, until cauliflower is tender and liquid is reduced by about half, about 10 minutes. Season with salt and pepper. 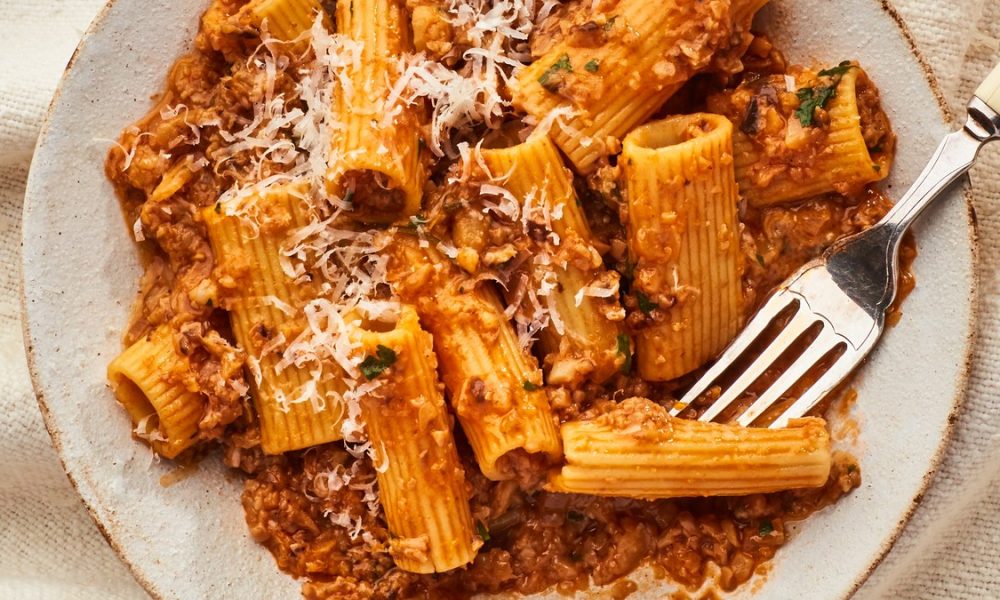 As a vegetarian, my experience with bolognese consists of standing in the pastry kitchen at my former restaurant job, churning gelato while listening to the head chef shout « Bolo! Bolo! Bolo! » to the cooks in the back as each order came in. I didn’t even know what « bolo » (pronounced like the always-in-fashion tie) meant until I asked (derp). But, as it turns out, this ignorance made me the most unbiased judge of senior food editor Andy Baraghani‘s Cauliflower Bolognese. With no meaty ragù in my taste memory, I had a blank palate and an open mind. This cauli bolo (or cauli bo, as I’ve affectionately dubbed it) didn’t have to live up to any impossible-to-meet (or meat!) standards: I could judge it by its own vegetarian credentials.

Because while cauliflower bolognese takes inspiration from the classic beef-pork, or beef-pork-veal, or beef-pork-antelope sausage (?!) sauce in that it’s the perfect, luscious, glossy, Sunday-night-into-Monday-lunch meal—this version is another beast entirely.

In place of ground meat, cauliflower is our foundation: It gets blitzed in a food processor as if you’re making cauli rice, then cooked down with finely chopped shiitake mushrooms (for a savory, earthy base), onion, sliced chile, woodsy rosemary, plenty of tomato paste, and garlic—lots of garlic. Once the cauliflower starts to lose its moisture (a good indicator is that it will start to stick to the pot), you’ll shuttle in al dente pasta and plenty of its cooking liquid. With that addition, the contents of your Dutch oven transform from a mixture of sweated vegetables and aromatics to a velvety but—trust me—bitsy sauce. (Honestly, the texture is not unlike that of cottage cheese: creamy but not homogenous.) Rigatoni is the shape you want: The sauce burrows away in those tubes, ready to surprise and delight you with every bite.

My fixation with the tomato-y, cheesy, rich-but-not-heavy cauli bo—I ate it three days in a row, hiding it from my partner onto whom I normally push all pasta leftovers—piqued my curiosity about its meat counterpart. So I texted my friends—not my colleagues, since that would’ve been embarrassing—about the ideal texture of bolognese. « Pretty creamy, » one responded. « But the meat adds a pleasant chewiness. It sounds weird and terrible, but I can’t think of another word. It should also kind of melt in your mouth after the first few bites. » Another one said « warm and soft. » When I reminded him that warm is not a texture, he rebutted, « True, but it’s a mouthfeel. Crumbly. » What insight! At that point I mustered the courage to just ask the food editors, who said « velvety, » « meat pudding, » « meat paste, » and « Sloppy Joe. »

So this isn’t a meat pudding, but it could pass as the filling for a vegetarian Sloppy Joe, and I’d definitely describe it as velvety. And there you have it: Cauliflower bolognese isn’t as wildly different from bolognese-bolognese as I’d originally predicted. Besides, Andy admitted to me (actually, I was eavesdropping) that even though he has been ankle-deep in meat bolognese all month (he’s working on a recipe), it was the cauliflower bolognese he returned to for a second helping.

Get your own boyfriend:

No, this isn’t some kind of joke, and you don’t have to be a vegetarian to love what’s going on here. Chopped-up cauliflower and mushrooms provide comparable richness and texture to what you usually get from the classic long-cooked ground meat sauce. 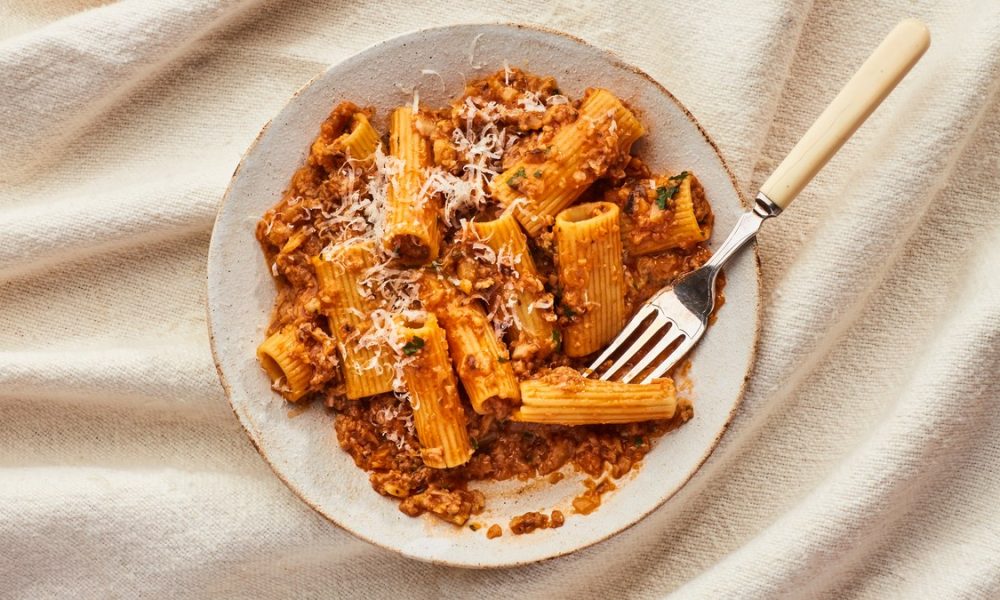