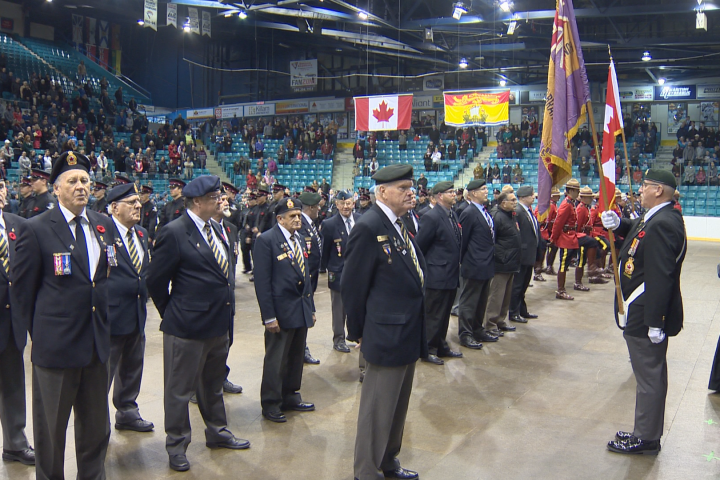 People gathered inside the Moncton Coliseum Sunday to mark Remembrance Day, one of the many ceremonies held across New Brunswick on Sunday.

It was a chance to pay tribute to those who have fought, and those who continue to fight, for our freedoms.

“Stop and think,” said Legion Branch 6 Chaplain David Evans. “This is the 100th anniversary of the end of the war to end wars, which did not end wars.”

Many wreaths were laid by veterans, dignitaries and the rest of the community as part of the ceremony

Evans says he is concerned about the possibility of further conflicts, but wants to avoid that at all costs.

“War is a time that we remember what happened, but we also — it’s a time that we want to be determined to do our best, our absolute very best to avoid war in the future,” he says.

Peter Beers, first-vice president of Legion Branch 6, says it’s an important time to remember and honour those who risked their lives for our freedom.

“Some [veterans] will come from veterans’ centres and hospitals, and be transported over by the bus,” he says. “They’ll be sitting with us also; they like to be here. Some of them, the average [age] right now [is] between 80s and up in their 90s.”

WATCH: Why is Trudeau apologizing to LGBT community important?

Among the many wreaths placed was one that bears special significance for some people, like firefighter Diane Doiron, who experienced the gay purge — a period when members of the military and other agencies were investigated and sometimes fired because of their sexual orientation.


READ MORE:
The forgotten Muslim soldiers who fought in First World War trenches for the Allies

“It’s a chance for us to be able to say thanks for those who are not here today,” says Doiron.

“A lot of our brothers and sisters didn’t get to be here today because of what happened with the purge, and this is our chance to say ‘thank you.’”

Doiron says a 2017 apology made by Prime Minister Justin Trudeau was on her mind as she laid the LGBTQ2 wreath.