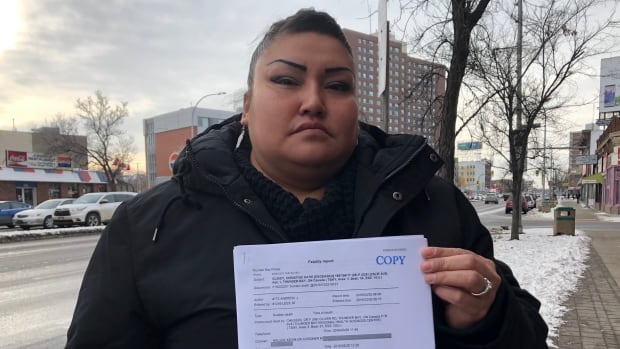 Thunder Bay police interviewed the man who said he was with Christina Gliddy on her last night on Earth.

The man told police the two went to the old train bridge that crosses a river in Thunder Bay. He said he remembered gazing up at Orion’s Belt with her, and that they drank mouthwash and had intercourse.

He told police he left her there because she wanted to sit on the tracks a while, according to police reports of the investigation obtained by CBC News.

He said he noticed a group of people approaching her as he left, and that was all he knew.

Gliddy’s case is one of several under review by the Office of the Independent Police Review Director (OIPRD) as the police watchdog probes allegations of systemic racism in the way Thunder Bay police handle missing-person and death cases involving Indigenous people in the city. 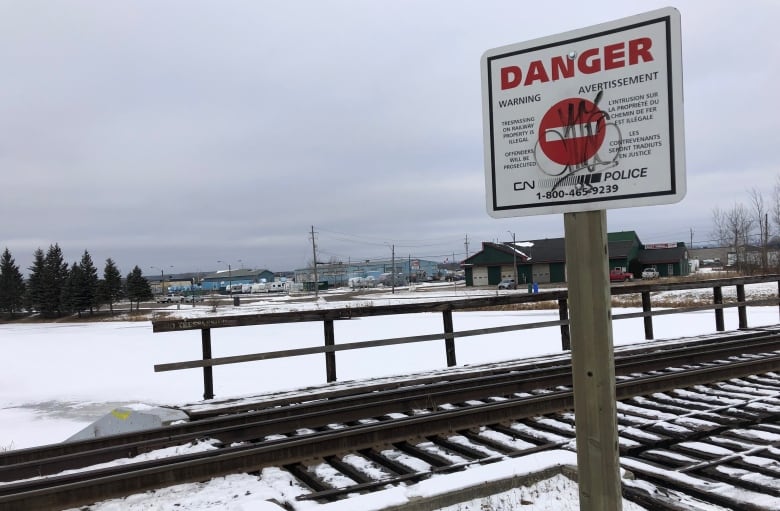 The train bridge in Thunder Bay near the spot where Christina Gliddy was found on March 29, 2016. (Karen Pauls/CBC)

Police found Gliddy at 8:01 a.m. on March 29, 2016, near death, lying on a black-red-and-white winter jacket that was soaked and starting to freeze on the gravel near the « Danger » sign by the railway bridge.

The 28 year-old mother from Wunnumin Lake First Nation, an Ojibway community that sits about 360 km northeast of Sioux Lookout, Ont., was pronounced dead at 11:49 a.m.

Thunder Bay police closed the case in September 2016. The coroner concluded she died from accidental hypothermia.

The family still has doubts.

« I didn’t really believe it because it sounds to me that they rushed into it and closed it up right away, » said Gliddy’s sister Thea Gliddy, 36. « There have been rumours in Thunder Bay, rumours about somebody murdered her. »

The OIPRD is set to release its findings Wednesday following a two-year investigation that was triggered by a separate police watchdog investigation into the death of a man named Stacy DeBungee, 41, whose body was pulled from the water on Oct. 19, 2015, just upstream from where Gliddy was found.

Thunder Bay police concluded he stumbled into the river and drowned. Police said his death « did not appear suspicious » and they deemed it « non-criminal » before an autopsy was completed.

A private investigator uncovered several possible leads Thunder Bay police failed to follow after a review of the case.

His complaint alleged there was a pattern of Thunder Bay police declaring the deaths of First Nations people not suspicious within hours of a body being discovered.

Gerry McNeilly, the director of OIPRD, said the current investigation included at least 30 cases dating back to the 1990s, nine of which involved missing and murdered Indigenous women and girls.

CBC News learned earlier this year that Glidddy’s case was part of the OIPRD probe. 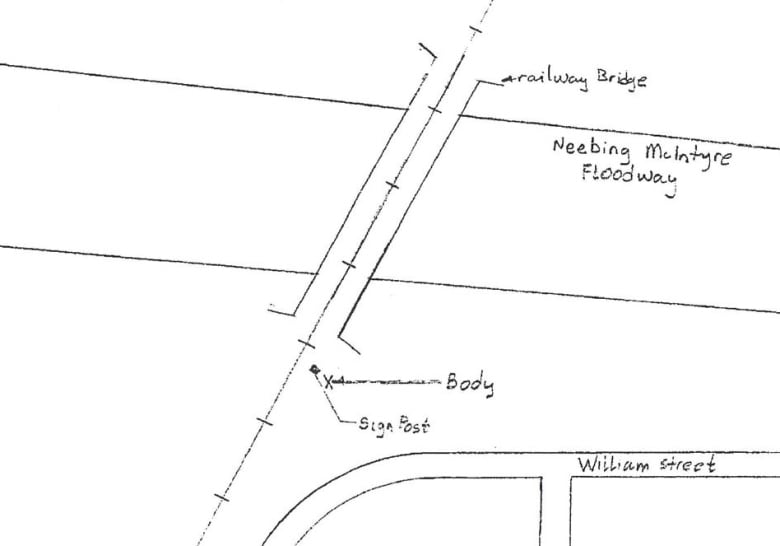 Diagram of where Christina Gliddy was found by Thunder Bay police. (CBC News)

Thea Gliddy, who lives in Winnipeg, said she is hopeful the OIPRD’s report will help bring justice to her sisters case, which she believes was mishandled by Thunder Bay police.

She said she still has questions about the bruising found on her sister’s body and why she was found in her socks.

« Her stuff was scattered — that doesn’t make sense to me, » Thea Gliddy said. « I believe something more happened. »

Police found an unopened can of President’s Choice cranberry ginger ale in the left pocket of the winter jacket. In the right pocket there was a spoon and a torn and wet piece of paper, a clothing request form from the local shelter.

One of Gliddy’s faux suede boots, the right one, was found near an empty mouthwash bottle and a white, knitted tuque with a pom-pom and ear flaps. The other boot was found under the bridge, several metres away, with a black toque.

Her two layers of pyjama pants were wet and pulled down in the back, below her buttocks.

For Indigenous people, ‘nothing has changed’

There have been many deaths along this river. The river is technically known as the Neebing-McIntyre Floodway, a channel constructed to protect Thunder Bay’s intercity area from flooding.

It is known locally to some as the « River of Tears. »

Thunder Bay police concluded both of those deaths were accidental drownings. 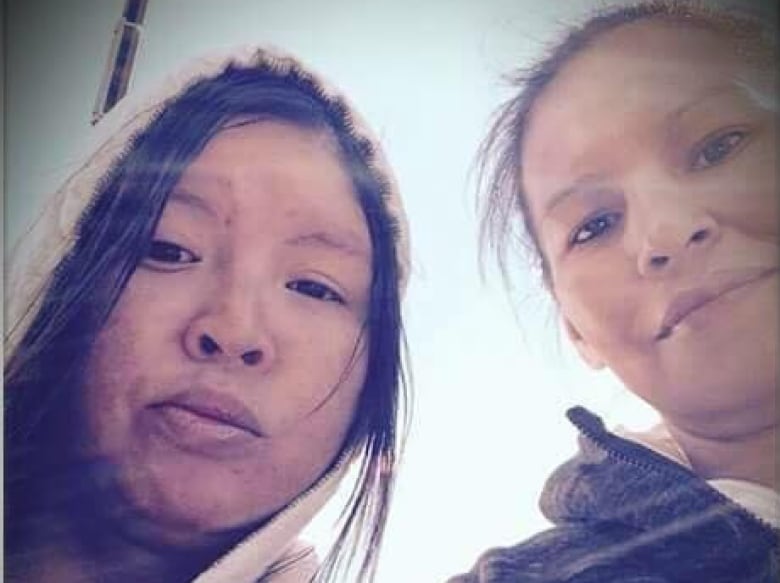 Both cases were part of a coroner’s inquest that investigated the death of seven youths in Thunder Bay. Five of the deaths were the result of drownings in Thunder Bay waterways.

The inquest raised many questions about how Thunder Bay police handled the death investigations of the youth.

In fact, the actions of the Thunder Bay police on cases involving the deaths of Indigenous people have been questioned for over 20 years.

The Chiefs of Ontario organization, which represents Indigenous interests across the province, called for an investigation into the committee’s findings by the Ontario Human Rights Commission, the Ontario Anti-Racism Secretariat and the Office of the Police Complaints Commissioner, said the report.

Philip Edwards, who sat on the Thunder Bay Police Services Board as a provincial appointee and was involved in compiling the findings, told CBC News this week that nothing came of it.

« For average Indigenous people, nothing has changed. It has gotten worse in many ways, » he said.

Thunder Bay police investigating Gliddy’s death never did track down whether there was truth to to the man’s statement about the group of people who approached  her as he left, according to case file.

« I got this feeling inside there is something wrong, » said Thea Gliddy. « I am still struggling to this day. I promised her when I was in jail, I promised her that I would find out what really happened to her. » 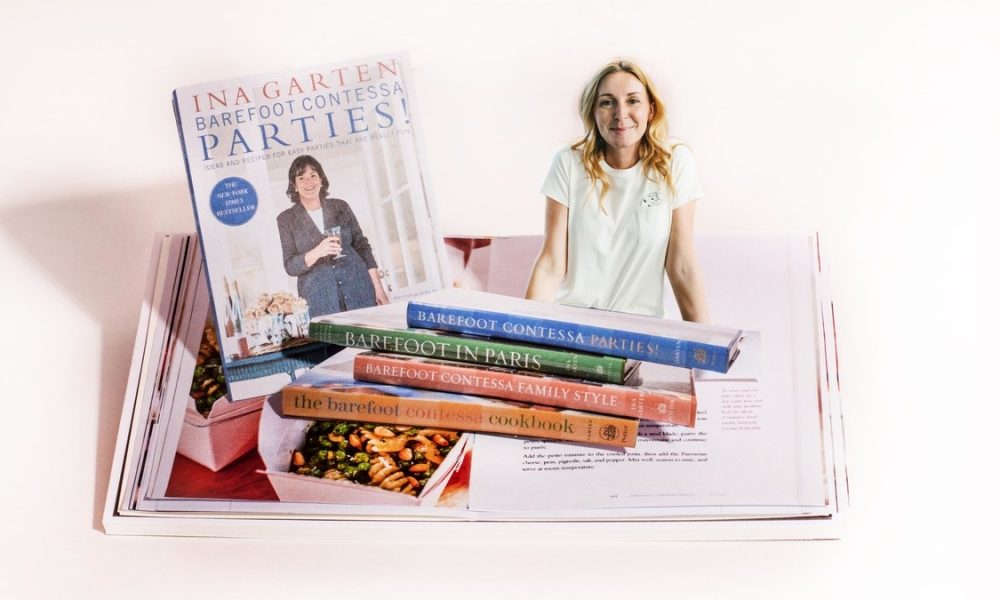 In honor of Ina Garten’s guest editing week, we asked chefs and celebrity fans to share their favorite Barefoot Contessa recipes as part of our series “How Easy Is That?” Below, Christina Tosi, founder and CEO of Milk Bar and author of new cookbook All About Cake, explains how her Ina-themed dinner party club started, and why pasta, pesto, and peas salad will always be on the menu.

About five years ago, some pals and I were at a dinner party and we couldn’t get over the roast chicken. The hostess was like, “Oh my god, this is my girl Ina’s roast chicken! We’ve never met before, but I just love her. It feels like our chicken now.” I realized that whenever I host a dinner party, my tableau is basically all Ina recipes. So we decided to start a tradition where once a year, my friends and I come together for an Ina party.

The Ina Club rules are simple: The entire table must be filled with recipes by Ina and Ina only. We all go to the market, channeling our inner Inas and shop based on what looks good, smells good, and inspires us. None of us necessarily knows what recipe we’ll make, but we do know seasonally which ones are our tried-and-true favorites. Then we bring the goods home, scour the internet and open all the Ina cookbooks, and make a meal. Everyone usually makes a few dishes, and we eat potluck-style.

The most requested recipes for the Ina Club are almost laughably simple, like the summer pasta salad with tomato, Parmesan, and basil, and Parmesan-roasted broccoli. In the wintertime, I did a customized grilled cheese bar to go with her perfect tomato soup. I cleaned out my fridge of all the cheeses, jellies, and jams, let people mix and match, and then cut into little squares to be “croutons.” What a genius idea—grilled cheese croutons!

But one of my personal favorites to make is the pasta, pesto, and peas salad from Barefoot Contessa Parties! In this recipe, she finds a beautiful balance of things that are familiar and unexpected, like taking peas, blanching and blending them, and then putting them into a cold pasta salad with pesto. On some level, it was earth shattering when she did that—it just seemed so perfectly outside of the box, yet also perfectly acceptable and classy. It was like edgy without being edgy; it was like all the effort, but in an effortless way. She really taught me that great food can be accessible and comfortable, but that you can take it just one step further by throwing yourself out of your comfort zone.

With both Ina as a person and with her recipes, there’s an ease, but there’s also empowerment. She’s not selling the persona of perfection—she’s selling humanity. She’s just being her, and that’s what makes her so perfectly, untouchably lovable on every level.

In my five years of hosting the Ina Club, I’ve never once invited her. I don’t want her to get bombarded with crazy, overly enthusiastic (yet very lovely) women, and I know she probably gets a lot of invitations. But maybe next year will be the year I surprise everyone when she joins us. So, consider the invitation open for 2019, Ina!

—As told to Alyse Whitney

This famous Barefoot Contessa recipe originally came from my wonderful friend Brent Newson. In order to keep the pesto from turning brown, he adds spinach and lemon juice. To make a delicious and easy one-dish summer lunch, use your imagination and add grilled chicken or fresh salmon.

Cook the fusilli and bow ties separately in a large pot of boiling salted water for 10 to 12 minutes, until each pasta is al dente. Drain and toss into a bowl with the olive oil. Cool to room temperature.

In the bowl of a food processor fitted with a steel blade, purée the pesto, spinach, and lemon juice. Add the mayonnaise and continue to purée.

Add the pesto mixture to the cooled pasta, then add the Parmesan cheese, peas, pignolis, salt, and pepper. Mix well, season to taste, and serve at room temperature.