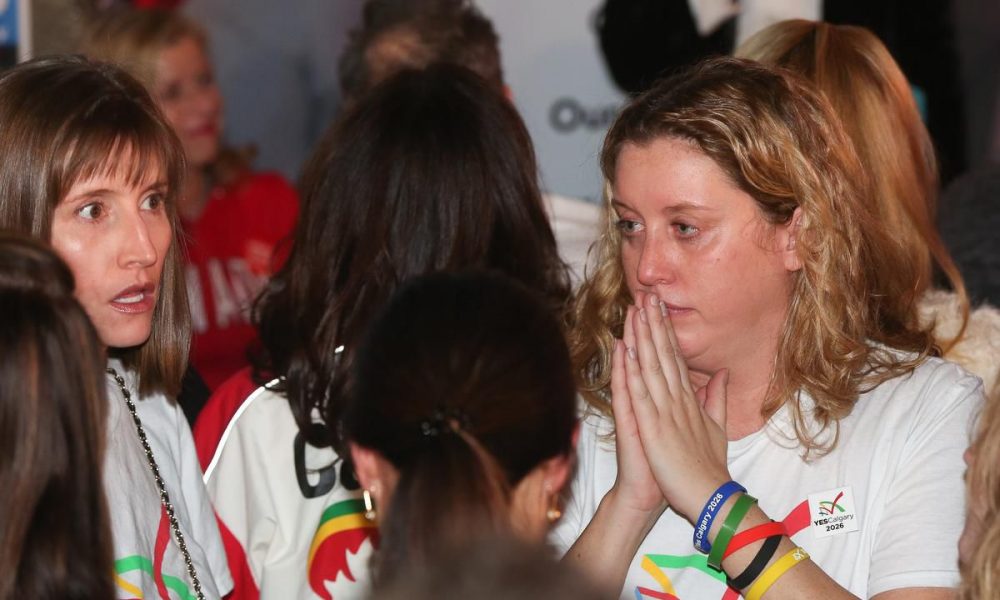 CALGARY—It has had many close calls and near misses, but Calgary’s Olympic bid faces an all-but-certain end after Tuesday’s vote.

A majority 56.4 per cent of voters cast their ballots against continuing with a bid for the 2026 Winter Games in Calgary’s plebiscite in results announced a little before 10 p.m, with more than 300,000 votes counted.

Because the funds the provincial and federal governments offered for the cost of hosting are conditional on a “yes” in the mandated plebiscite, the bid almost certainly won’t go on from here. City council still must make the move to stop work on the bid official.

The decision follows a majority of Calgary city councillors voting in favour of stopping the bid process two weeks ago, with Ward 8 Councillor and Olympic assessment committee chair Evan Woolley submitting a series of recommendations that included cancelling the plebiscite. That move ultimately failed because it didn’t clear the higher required threshold of 10 council votes.

Woolley said he doesn’t feel that council presented a funding deal that was good enough or timely enough for Calgarians to have enough information to make a decision.

“The recommendations will look very, very similar to the ones I moved two weeks ago,” he said.

“There’s a number of administrative things we have to do, but the motion will be quite simple, and then there will be work behind the scenes.”

Ward 11 Councillor Jeromy Farkas described the vote as a “come-from-behind victory” for the “no” side.

“It’s been a real David versus Goliath on steroids when you think of the resources available to promote the ‘yes’ side of the bid,” he said.

Yes Calgary blanketed the city with campaign materials over the last week, including lawn signs, advertisements and robocalls, some featuring Mayor Naheed Nenshi describing the reasons he is a “yes” vote.

Meanwhile, the No Calgary Olympics campaign held a rally at Olympic Plaza on Saturday urging Calgarians to vote against the bid, but they had comparably fewer volunteers and resources to work with.

No Calgary Olympics organizer Erin Waite said she views the results as a sign that Calgarians thought seriously about the potential risks that come with hosting the Games.

“A ‘no’ vote says that they saw the excitement of hosting the Olympic Games and the fun that that event could drive, but weighed that against all the other factors that are important to consider,” she said.

The Calgary Olympic Bid Corp. estimates the cost of hosting the Games in Calgary at $5.1 billion, with the city, province and federal government contributing $2.875 billion.

That budget, and a subsequent cost-sharing proposal, came after BidCo originally set the cost of hosting at $5.2 billion, with $3 billion coming from public funds — but after a negotiating deadlock and Woolley’s move to cancel the plebiscite, a late-night funding proposal revived the bid process.

According to a funding proposal currently on the table, Calgary would pay $370 million in cash, plus an additional $20 million to purchase an insurance policy. The provincial government has committed $700 million, and Ottawa will pay about $1.4 billion if Calgary’s hosting bid succeeds.

Ward 4 Councillor Sean Chu, who has been a vocal opponent of the Olympic bid, welcomed the plebiscite results.

Chu said he continues to believe that hosting is bad for the city’s finances.

“It’s like your household: you already have the debt of your mortgage. And (on the ‘yes’ side), it’s like, ‘Let’s go buy a Ferrari.’

“Is this how you run your finances? I don’t think so.”

Ward 9 Councillor Gian-Carlo Carra, who lent his voice to the “yes” campaign in the days leading up to the vote, said he thinks the city still needs to consider how to effectively present itself to the world.

“If we’re not using the Olympic Games to do that, we’re going to have to do that anyway. The conversation becomes: how do we do that in a meaningful way?” he said.

He added that challenges remain without the Olympic bid, including figuring out a way to boost the stock of affordable housing in Calgary and upgrading the sport venues left from the 1988 Games — two benefits that BidCo said would come from hosting in 2026.

Ward 12 Councillor Shane Keating said he also worries about what the plan is to upgrade the city’s sport infrastructure without the Olympics.

“All of the renovations to McMahon Stadium, BMO Centre, Olympic Oval, Canada Olympic Park, none of that will happen,” he said.

The 2026 draft hosting plan also proposed to build a new mid-sized arena and field house for Calgary. The latter project has been a city infrastructure priority for years, but has remained unfunded.

“The field house — which is an absolute shame we don’t have one yet — will still have to be funded at some point in time,” Keating said.

Two other bids are currently in the running for the 2026 Games: Stockholm, Sweden and a joint bid from the Italian cities of Milan and Cortina. The deadline for submitting bid books to the International Olympic Committee is in January 2019, and the final host city decision is slated for June.