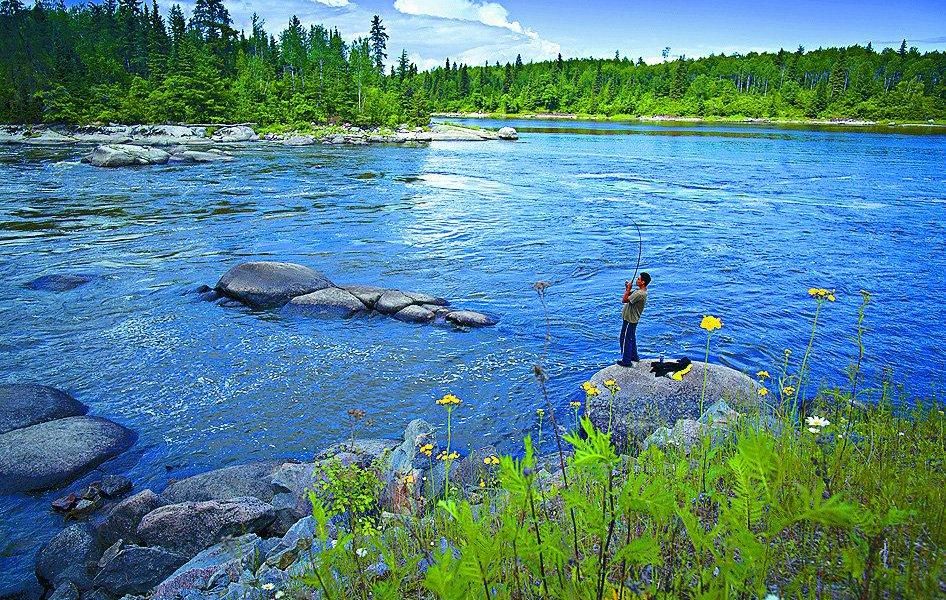 Industrial loggers are banned from clear-cutting the boreal forest near Grassy Narrows, leaders of the First Nation have declared in a land sovereignty claim meant to help the community recover from decades of pollution.

There is currently no ongoing industrial logging in the part of the Whiskey Jack Forest that sits in territory Grassy Narrows leaders say is their peoples’.

Though the provincial government has decided who can log and where, the community announced a moratorium in 2007 and there has been no harvesting since the company operating in the area agreed to leave shortly after. Then, in 2017, Ontario’s previous government promised no cutting for at least five more years.

Grassy Narrows leaders fear the new Doug Ford government will re-open the forest to business. A spokesperson for Minister of Natural Resources and Forestry Jeff Yurek said “we cannot comment on a document we ourselves have not yet received. »

“We are the Indigenous people of this land. … Industrial logging makes our ongoing mercury crisis worse,” said the declaration signed by Chief Rudy Turtle and council. “We will make our own decisions and there will be no industrial logging on our Anishinabe Territory.”

Between 1962 and 1970 a Dryden, Ont., paper plant dumped 10 tonnes of mercury, a potent neurotoxin, in the Wabigoon River. The site of the plant, now under different ownership, is upstream from Grassy Narrows. The mercury contaminated the fish and poisoned the people who ate the fish. They developed tremors, loss of muscle co-ordination, slurred speech and tunnel vision, and still suffer today.

Opinion | Is Grassy Narrows poisoning a crime against humanity?

‘I started to have seizures at the age of 2.’ Ontario residents describe the ravages of mercury exposure

Logging could lead to more mercury being released to the environment, scientists have said, adding toxic insult to injury for a First Nation already devastated by industrial mercury dumping decades ago.

Over the past two years, the Star and scientists have revealed that fish downstream near Grassy Narrows remain the most contaminated in the province, that there is mercury-contaminated soil and river sediment at or near the site of the old mill, and the provincial government knew in the 1990s that mercury was visible in soil under that site and never told anyone in Grassy Narrows or nearby Wabaseemoong (Whitedog) Independent Nations.

Scientists strongly suspect that old mercury still contaminates the mill site and is polluting the river.

Clear-cut logging threatens to add another source of mercury to the water. Here’s how it happens: Mercury gets released into the atmosphere from coal-fired power plants and incinerators and later rains down in forests where it gets trapped in the soil. When a forested area is clear-cut (a large number of trees in one area are uniformly cut down), mercury can run off into lakes and rivers, where its potency gets magnified in aquatic life and travels up the food chain.

Since 2002, some Grassy Narrows members have maintained a blockade of a main road that prevents industrial access to woodlots near their community.

Assembly of First Nations National Chief Perry Bellegarde was in the community north of Kenora Tuesday and signed the declaration as a witness.

“I support their Declaration and their goals of reconciliation, restoration and reparations,” Bellegarde said in a prepared statement. “All governments must recognize, respect and honour our rights and responsibilities to our traditional territories. This includes the right to decide what happens in our territories.”

Top environment ministry officials had serious concerns about a plan to clear-cut near Grassy Narrows, the Star has previously reported.

“Yes, logging introduces Hg (mercury)!” one scientist wrote to a colleague in an internal email. In another email, the former director of the branch that oversees scientists charged with monitoring Ontario’s environment observed that “no one is tracking the downstream implications” of the province’s logging plan.

A logging, or forest management, plan determines how much and where tree harvesting can occur, where roads can be built and how much forest will be renewed. The plan is renewed every 10 years after consultations with stakeholders.

Despite the worries of environment officials, the ministry in 2014 rejected a request by Grassy Narrows for an environmental assessment of the potential impact of the 10-year logging plan in effect then. Grassy Narrows lawyers asked for a judicial review of the ministry’s rejection and the plan itself but then suspended their court fight when former natural resources and forestry minister Kathryn McGarry said there would be no logging in that area for the remaining five years of the plan.

Meanwhile, more than four decades after mercury was dumped by the mill upstream, the physical and mental health of the people in Grassy Narrows is by many key measures “considerably worse” than that of other First Nations in Canada, according to a landmark government-funded survey that was released earlier this year.

While what Grassy Narrows is declaring “could at first glance seem like a radical demand — asserting their sovereignty over their traditional territories” — it is a reasonable and necessary step to take given the “more than half-century of neglect and destruction of their environment … as a result of failure of governments to respect their rights,” said Craig Benjamin of Amnesty International.

“Who’s in the best position to make the decisions for the future of Grassy Narrows?” said Benjamin, who is Amnesty’s campaigner for Indigenous rights. “(Government) failures are apparent. And it’s not just one failure. It has been decade after decade they have failed the people of Grassy Narrows.”

“Our way of life has been under attack by residential schools, … mercury pollution, and racism,” the statement says. “Now our fish are unsafe, the moose and caribou are nearly gone, we have less marten, wild rice and blueberries. Our medicines are tainted.

“Our sovereignty and our rights have been repeatedly violated by harmful decisions forced on our people by government and industry.”

Last year, the provincial government committed $85 million to clean up the river, and the federal government has pledged to help build a mercury care home that will help some of the sickest residents.

The declaration demands compensation for the logging of roughly 20 million trees over a 20-year period.

The declaration will be enforced under Grassy Narrows “own authority,” though Grassy leaders invited the provincial and federal governments to recognize and enforce it through legislation that places similar restrictions on land use and management.

“Decisions forced on our people have poisoned our fish and degraded our forest through industrial logging,” said Chief Turtle. “Moving forward we will make our own decisions to protect what is left of our way of life.”