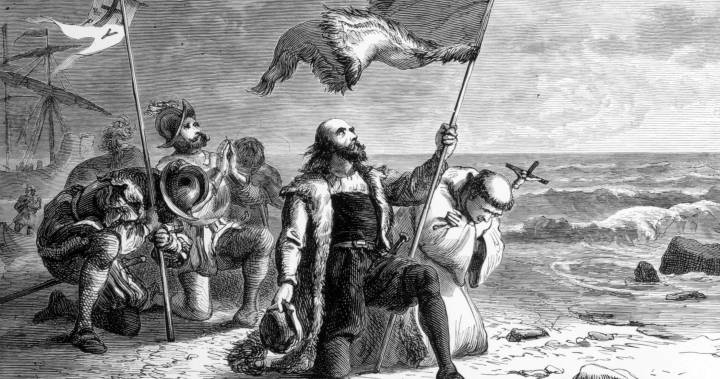 The elimination of nearly 55 million, or 90 per cent, of Indigenous North Americans during European colonization led to global climate change and the “Little Ice Age” of the 17th century, a recent study finds.

Researchers at University College London found that the Great Dying — the massive loss of life that followed Christopher Columbus’ 1492 conquest of the Americas through genocide and the spread of disease — left roughly 56-million hectares of land abandoned.

The study will be published in the March edition of Quaternary Science Reviews but is already available online.

The mass vacancy resulted in a sudden “terrestrial carbon uptake” when the land was reclaimed by nature.

Colonization of the Americas at the end of the 15th century killed so many people, it disturbed Earth’s climate, according to a new study by University College London.

According to the study, a spike in plant life was responsible for up to 67 per cent of a significant drop in carbon dioxide levels between 1520 and 1610. Carbon had been transferred from the atmosphere to the land surface through photosynthesis.

Previously cored Antarctic ice samples were investigated. Researchers observed that 7.4 petagrams — or 7-billion metric tonnes — of carbon had suddenly disappeared at that point in time.

Carbon absorption was greater in wet, tropical environments but still occurred in the drier, coniferous and deciduous forests of the U.S. and Canada.

“These changes show that the Great Dying of the Indigenous Peoples of the Americas is necessary for a parsimonious explanation of the anomalous decrease in atmospheric CO2 at that time and the resulting decline in global surface air temperatures,” the study said.

An undated painting shows Christopher Columbus arriving at one of the Caribbean islands on his voyage of discovery from the Naval Museum in Madrid, seen on May 19, 2006.

The Little Ice Age was a time period that saw winters in North America and Europe average approximately two degrees colder than the current era. Its coldest period is largely agreed by scientists to be between 1600 and 1800.

A difference of two degrees may not seem like much but, in fact, does make quite a difference to daily life.


READ MORE:
New law on Indigenous languages will aim to help them ‘survive and thrive’

“A 1-2 degree Celsius temperature drop would have a significant effect on winter weather around North America,” said Anthony Farnell, chief meteorologist at Global News. “Snow would arrive earlier in the fall and stick around longer in the spring. Borderline storms that now fall as rain or freezing rain would be more likely snow if it was just a couple degrees colder.”

Farnell went on to explain how an increase in snow compounded the situation in the 1600s.

“When there is more snow on the ground, the albedo of the earth’s surface increases which means more of the sun’s warming rays are reflected back into space. This then leads to even colder temperatures and more snow which is how a series of cold winters can snowball into a ‘little ice age.’”

The nearly 200-year cold stretch began to decline soon after the first Industrial Revolution began in the United Kingdom in 1760.

Global News questioned Koch over his team’s data — particularly the population figures. He explained they used a vast amount of data, previous studies and sources to draw their conclusion.

“[The numbers are] based on archaeological evidence, historical documentation and something like house counts,” Koch explained. “For later periods, we didn’t need to do that. We looked into taxation records and census data that was established by the colonizers.”

Those records became more and more robust over time, according to Koch.

“This report substantiates what the chair of the TRC said that it wasn’t just cultural genocide that Canada committed, it was also physical and biological,” explained Palmater. “This kind of scientific hard data shows just how extensive the genocide was and that means something different for Truth and Reconciliation.“

The well-known activist added that she hopes the new scientific data will quiet some of the skeptics.

WATCH BELOW: Activist: ‘Someone’s got to account for this’ after study claims colonization sparked climate change

“One of the biggest struggles in our resistance, in our advocacy and even trying to get someone to talk about reconciliation is denial,” Palmater said. “It’s always a denial from the colonial, or settler, governments about what they did, limiting the harms and denying what the true extent and impact is.”

That impact, according to the study, may have been greater than previously thought.