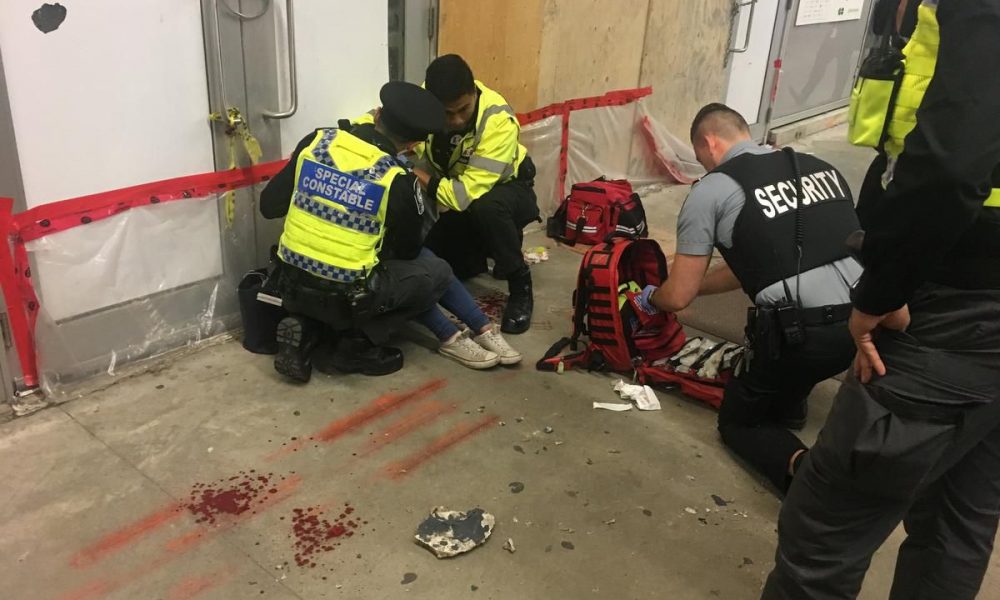 The young woman who was hit by a foot-long chunk of falling concrete at the Union Station’s GO terminal last week intends to pursue legal action against the City of Toronto and Metrolinx, her lawyer confirmed.

Nainesh Kotak told the Star that notices of action were sent to the city and Metrolinx Wednesday afternoon. His office is also requesting that all surveillance footage of the accident be preserved and that his office be provided with a copy of the incident report, or record documenting what happened.

Alison, whose last name has not been published, was walking through the Bay St. teamway near the entrances to platforms seven and eight when she was hit by a chunk of falling concrete last Thursday at about 5 p.m. The 24-year-old, her lawyer said, had just started a new job at an artificial intelligence company, was a military reservist and works part-time at a Longo’s grocery store.

“She remembers being struck on the head and thought for a second that someone hit her,” said Kotak in a written summary detailing his client’s recollection of the accident. “She recalls falling and thinks that a woman close by may have caught her. She recalls that blood was streaming into her eye and she lost consciousness for a short period of time.”

Special constables were nearby and provided immediate care to the young woman, who was bleeding from a wound to her head.

The station is owned and operated by the City and Metrolinx. Spokespeople for both responded via email to questions on Wednesday afternoon. Neither could confirm they had received the notices and said that they would, regardless, not be commenting on legal proceedings.

Woman’s delay in suing the city after a fall costs her $9,000 in legal fees

“The health and safety of commuters using Union Station is a top priority for the City of Toronto and Metrolinx. We wish the woman who was injured a full and fast recovery,” said city spokesperson Erin McGuey. “We are unable to provide further comment at this time.”

Metrolinx spokesperson Anne Marie Aikins said that section of the station is being monitored. “Some concrete scaling and minor repairs were made, and City of Toronto and Metrolinx engineers determined the areas underneath the teamways are safe,” said Aikins.

Speaking generally, Aikins said that if a lawyer or individual requests a copy of an incident report, the law says it must first be vetted through her office’s privacy coordinator. The company regularly cooperates with people making those requests, she said.

Kotak said Alison was examined at St. Micheal’s Hospital and released on the night of the accident and will be returning to seek additional care at the hospital’s head-injury clinic.

Kotak would not provide Alison’s last name and declined a request by the Star to speak with her. His client is experiencing pain and headaches, is “frequently vomiting,” confused and traumatized, he said.

He said they have not determined what his client will seek in terms of damages. That will depend on the long- and short-term impacts on her health and what they learn about what led to the accident.

“If it comes to light that there are any construction companies, or other entities, that may have caused or contributed to the incident then they would be named in the statement of claim,” he said. “What you seek and what the case is worth is often quite different. What the case really depends on is her prognosis for the future.”

With files from Marjan Asadullah

A woman in her 20s sustained serious injuries after she was hit by concrete that fell from the ceiling at Union Station’s GO terminal, Thursday afternoon. She was taken to hospital.

Toronto paramedics received a called at 5:21 p.m., about a woman walking inside the Bay St. West Teamway by platform seven-eight who was injured by falling concrete. The Teamway is a tunnel which passengers enter to get to their platform.

The woman was hit by a piece of concrete of about a foot in diameter, which fell from the ceiling. There were large stains of blood left on the platform.

Four special constable officers were on the scene treating the woman along with two security guards.

Metrolinx says the area where the incident took place is closed for investigation.

Passengers can access the Bay East Teamway and the York GO Concourse, which is also accessible through the Union Station.

“The City of Toronto is bringing in an engineer to assess the structure itself and we’ll have to refer all questions to the city for now,” said Metrolinx. 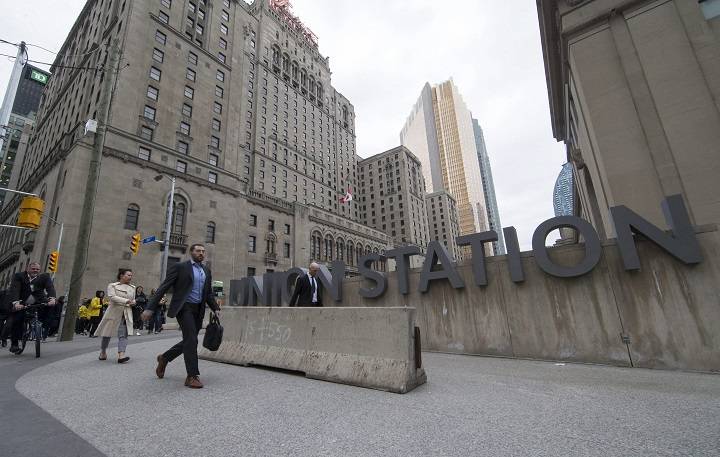 Officials say a woman has been taken to hospital after she was hit by a falling piece of concrete at Union Station during Thursday’s evening rush hour.

Toronto police and paramedics said they were called to the Bay West Teamway before 5:30 p.m. with reports a pedestrian was struck.

Paramedics took the woman to hospital with unspecified injuries.

Initial indications are a piece of concrete fell from the ceiling. We recognize this is a busy area for commuters and out of an abundance of caution the Bay West Teamway will remain closed until further notice. 2/4

In an update released on Twitter Thursday evening, the City of Toronto said the walkway will be closed “until further notice.”

“Safety is central to everything we do, and @Metrolinx and the City of Toronto (@TorontoComms) have sent engineers to the scene to investigate. Updates will be provided as we receive them,” the update said.

Commuters were encouraged to use the Bay East Teamway, the Great Hall, or the York East and York West Teamways to access Union Station.

Safety is central to everything we do, and @Metrolinx and the City of Toronto (@TorontoComms) have sent engineers to the scene to investigate. Updates will be provided as we receive them. 4/4