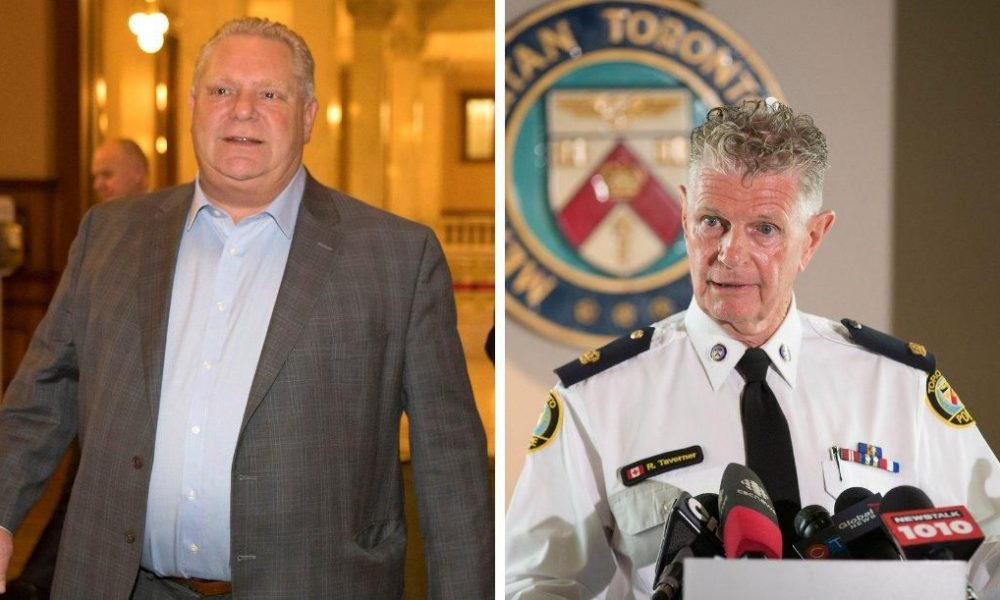 The odds are against Toronto police veteran Ron Taverner ever being able to effectively lead the OPP because controversy over his friendship with Premier Doug Ford has done irreversible damage, policing experts say.

“You’re not doing any favours putting him in that job,” former RCMP commissioner Bob Paulson told the Star, echoing remarks from others in the field.

“I don’t see how this can be fixed,” said a retired senior police executive who requested anonymity to speak freely.

“If there’s any perception of a linkage like the pictures of him arm-in-arm with Premier Ford, how is the public ever going to have confidence?”

One potential pitfall cited is a situation like the Ontario Provincial Police criminal investigation into deleted documents from the gas plants scandal during the government of former Liberal premier Dalton McGuinty.

That probe led to criminal charges against McGuinty’s former chief-of-staff David Livingston, who was convicted a year ago and sentenced to four months in jail. He is free on his own recognizance pending an appeal. McGuinty was not under investigation and co-operated with police.

While that probe conducted after a complaint from Progressive Conservative MPP Vic Fedeli — now Ford’s finance minister — was high-profile and widely reported in the media, it is not unusual to have lower-key investigations into government, politicians, bureaucrats or agencies that do not make headlines, said the retired senior police executive who recalls as many as 10 such probes in the last decade.

“Every investigation of the government is going to be tarred.”

Paulson said he kept a close eye on “risky” files as the top Mountie and for Taverner to do the same could raise suspicions.

“People will be wondering why the commissioner wants to know what he wants to know, which he’s quite entitled to know because he’s got to run the force. It just sounds like a mess,” Paulson added in a telephone interview from Ottawa.

He noted the “lions share” of his job was managing the RCMP’s relationship with the federal government while maintaining proper boundaries for both sides.

“The government knowing about things in advance is not a good idea, particularly in those kinds of investigations. Because then you get into all sorts of shenanigans of tainting evidence and tainting your investigation.”

Michael Armstrong, who was chief superintendent of the OPP’s organized crime division until retiring in 2014, said the challenge for Taverner is overcoming what is widely seen as a flawed interview process that has left him a target.

“One thing I took out of being in a leadership position is people want to look up to you. Don’t be somebody that they’re making jokes about. They want you to be the person they can look up to and aspire to be.”

Career police officers with higher rank than Taverner were rejected in favour of him, including a former Ontario head of the RCMP with more experience in managing a large staff, confirmed one source from the OPP, the country’s second largest police force.

“From the angle of why was this decision made, you question it,” said Armstrong. “There’s two things they’re saying – the talent isn’t there in the organization to lead it, or this guy is so great that they’ve stepped over the organization.”

Interim Liberal leader John Fraser said controversy will continue to swirl around the Ford government as MPPs return from a Christmas break that began Dec. 6 to debate legislation to prevent a strike by unionized workers at Ontario Power Generation.

The premier will face pointed queries from opposition parties during question periods on Tuesday, Wednesday and likely Thursday, with the New Democrats pushing for an “emergency select committee” of MPPs investigate the hiring and Liberals requesting a retired judge be appointed to lead an independent inquiry.

“Whatever happens now has to instill confidence – not just in the hiring process, but the interaction of the premier’s office and police forces because that’s in question right now, too,” said Fraser.