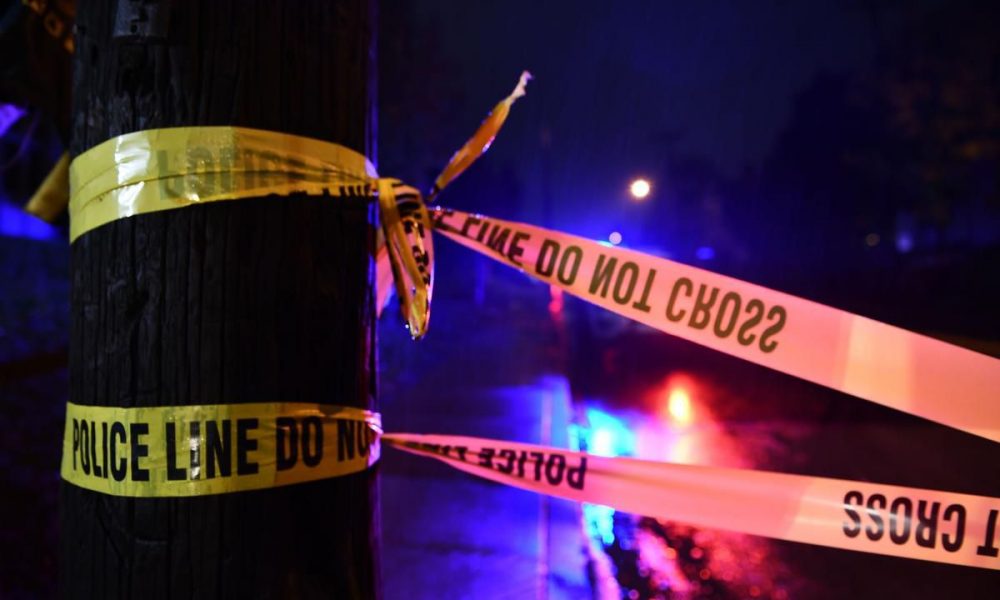 A man in his 20s is dead and a woman is injured after a double shooting in the downtown core Wednesday morning that capped off a violent 24 hours in the city.

It was only about 15 minutes past midnight when police received numerous reports of gunshots heard on King St. W., near Spadina Ave.

It was a busy night in the downtown core. Many people were still in the area when the shooting occured. Thirty-six-year-old Mike Dickson, who works for theScore sports app on the top floor of 500 King St. W., was one of them.

“Just after midnight, those of us that were left in the newsroom heard 8 or 9 gunshots ring out very loudly,” he told the Star. “The sound was unmistakable, and we all glanced at each other, frozen for a moment, before running to the window.”

They saw a man lying unmoving on the ground in front of Firkin Freehouse, a pub directly across the road from them, Dickson said.

“I immediately grabbed my phone and called 911.”

Coincidentally, there were already officers in the area, according to Insp. Darren Alldrit.

“We had officers who were conducting a RIDE spot check on Spadina just south of King at the same time,” said Alldrit. “They also heard numerous gunshots. They immediately ran to the scene, where they located a male and a female who had suffered gunshot wounds.”

Police said the woman had been shot in the leg, sustaining serious, but non life-threatening injuries. The man, however, was without vital signs.

From his vantage point above, Dickson, still on the phone with the police, said he saw two officers on foot approach the male victim and begin to attempt medical assistance, one officer launching into CPR.

He said two police cruisers pulled up not long after, and other officers were directed into a nearby alleyway, emerging around 15 minutes later with what seemed to be the female victim on a stretcher. The male victim had already been taken away by ambulance at that point, Dickson said.

“His face was ghostly white, as pale as I’ve ever seen,” Dickson said.

Police confirmed that both the man and woman were rushed to hospital, where the man later died. Paramedics said the two victims were in their 20s.

It was the sixth shooting incident in the city in a 24-hour period, and the second one to prove fatal. Earlier Tuesday morning, a man was shot dead while he was sitting with a woman in a vehicle parked outside of a North York apartment building. He has been identified by police as 28-year-old Lawrence Errol Joel John, of Toronto.

Dickson, who has worked in the King St. area for about 10 years, said he’s heard distant gunshots before, but has never “seen anything this close before.” Nothing, he said, has had “the same impact as tonight.”

King St. W. was closed both ways between Spadina Ave. and Portland St. for the investigation.

Police are asking anyone with information on the King St. W. shooting to come forward and speak to them.

With files from Ilya Bañares.