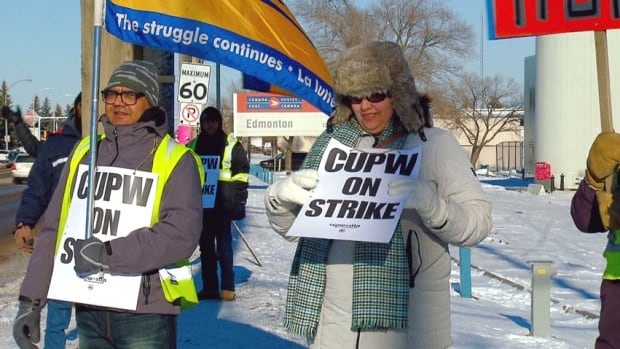 There is no end in sight for rotating strikes hitting Canada Post deliveries, after the postal workers’ union rejected the corporation’s contract offer and countered with its own proposal.

The Canadian Union of Postal Workers released a list of demands on Saturday in response to the company’s offer presented Nov. 14 and set to expire in three days.

Some of the requests in the CUPW proposal include:

Both sides say they are committed to reaching a resolution and continuing negotiations to reach a settlement for about 42,000 urban employees and 8,000 rural and suburban carriers, with CUPW now calling on the federal minister of labour to appoint a mediator.

Canada Post still hasn’t adequately addressed « major issues, » including pay equity and an « injury crisis, » Mike Palecek, the union’s national president, told CBC News on Sunday, » adding, « We won’t have an agreement until we have those issues dealt with. »

« Postal workers are the most injured workforce, at five times the average in the federal sector, » Palecek said. « This is an injury crisis. It’s getting worse and worse. Twenty-five per cent of letter carriers were injured last year. This has to be fixed. »

Canada Post had offered a new $10-million health and safety fund it says will make the corporation a « model organization in safety. »

On workload,the corporation says it has proposed several measures to « work with the union to better manage employee workload and adjust routes annually for volume changes. » The two sides have been in talks for nearly a year.

The Christmas &amp; holiday season is here – and Canadian businesses and families depend on Canada Post. We urge both sides in this labour dispute to resolve their differences quickly and reach a deal.

There is a growing backlog of postal deliveries blamed on rotating strikes that began Oct. 22.

On Saturday, Prime Minister Justin Trudeau took to Twitter to say Canadian businesses and families are relying on the postal service in the holiday season and urging both sides « to resolve their differences quickly and reach a deal. »

Late last week, Canada Post asked 190 partner countries to suspend mail shipments to Canada because of a backlog of deliveries resulting from the labour dispute.