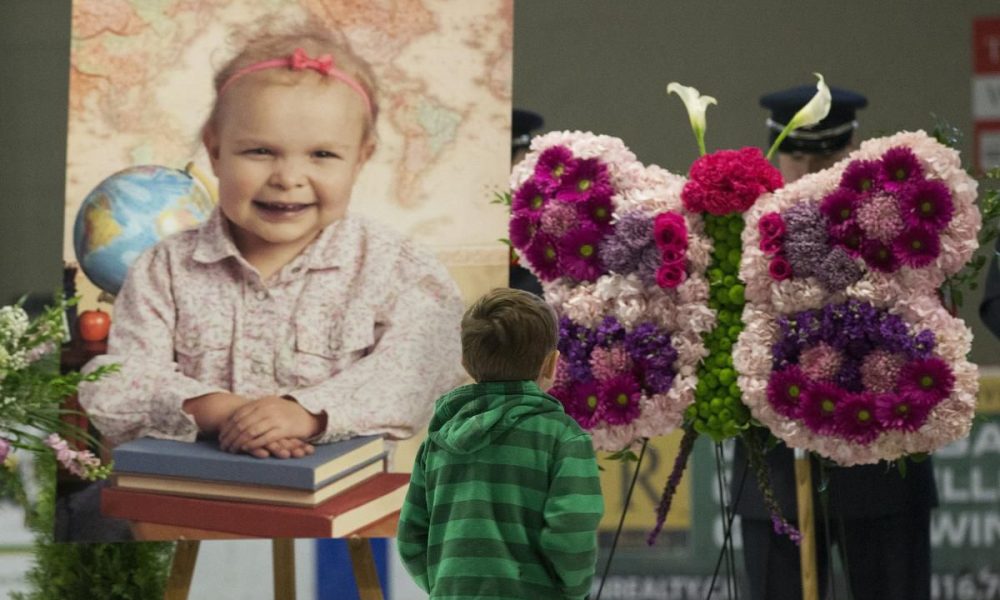 Abby was here, and the signs are everywhere. Pink ribbons are tied around the fence posts south of Schomberg, and in town, they’re on stop signs and telephone poles. At a coffee shop, there is a board where red hearts proclaim in permanent marker scrawl who has a free coffee or muffin coming to them. Just one of the many acts of kindness made in the name of the little girl who became a “binding force,” not just in this town north of Toronto, but everywhere she went. Abby Eveson died last week. She was here for five years and four months.

Abby Eveson was born with a rare congenital heart defect that limited the blood flow to her lungs. She had three open-heart surgeries before she was 2. When she was facing a surgery in 2014, her parents, Becky and Craig, began dropping $5 bills at the hospital, buying lunches for strangers, encouraging others to do the same. “It really helped us get through the hard times, just knowing that you’re helping make someone else smile when they’re having a difficult time,” Becky Eveson said earlier this week. “It just helped.”

It was an exchange with the universe, and it became a movement: We Believe in Abby.

Paying it forward for Abby: One family’s quest to create positive energy for their very sick daughter

“I know they truly believed that Abby survived for as long as she did because of that positive energy,” said Kate Glassow, a family friend.

On Thursday, the town arena was the only place big enough to hold the hundreds who came to celebrate her life. At centre ice there were flowers, balloons and pictures of Abby, including a recent school photo where she is leaning on some books in an academic pose. Her mom posted a behind-the-scenes version on Facebook about a month ago. Out of the frame, she is kneeling behind Abby to hold her up — “Picture day at school today! Gotta do what you gotta do xo.”

More than 500 people came to the service. Children sat cross-legged on the walking track. Many of them had done good deeds in Abby’s name, some had been on the receiving end, and others had been inspired by Abby. If Abby can do it, so can I. “It carried on forever,” Glassow said.

The Evesons knew that Abby’s life would never be free of medical appointments, but things had recently stabilized. “Out of all the years of being sick sick sick, it didn’t seem like the time,” Becky said. Abby was in school a few hours every day. She loved going on adventures, playing with her brothers, making people laugh. (One day at school, her teacher told her she needed to change her “grumpy pants.” When her mom picked her up to take her home for a nap, she insisted her pants be changed.)

In the middle of October, she went to a Wiggles concert with her mom. “I’ve never seen her beam more,” Becky said. A few days later, she learned she was going to be a big sister again. Her dad asked what they should name the baby, and Abby suggested “Coochie,” after her beloved soother.

Abby woke up early, as usual, on Oct. 24. She played in the bath and had a nap. She was sassy when her mom was too slow to return her iPad. And then she went into distress.

Eveson posted a message on the We Believe in Abby Facebook page. She knew it was bad, and asked for prayers and positive thoughts. “That’s always helped us in the past,” she said.

A few hours later, Abby died at the Southlake Regional Health Centre. Not long after, people in town began tying pink ribbons everywhere. Nearby towns did the same.

A jogger running downtown saw the ribbons. She had a sinking feeling.

“She started bawling,” said Glassow. “She was devastated, and again, she doesn’t know the family. Everyone just knows Abby’s story.”

During the service, Rev. Sheilagh Ashworth spoke for the family, including a tribute from 7-year-old Charlie.

King Township Mayor Steve Pellegrini also spoke, calling it the “most difficult” speech of his career.

“If you didn’t know Abby you might ask: how could someone so small make such a profound impact on our community?” he said. “It’s because of the size of Abby’s heart.”

The service closed with a Wiggles recording of Twinkle, Twinkle, Little Star. It was the only song that soothed Abby when she was upset, her mom said. “Twinkle, Mom,” she’d say, and Becky would sing.

There were many “heart moms” in the stands who had met on the fourth floor of Toronto’s Sick Kids hospital. It can be difficult for friends and family to understand, so they all keep in touch on a Facebook group, offering support.

In 2015, Carol Syme’s daughter Evynn had a heart transplant. It had not gone well, and after Syme posted in the group, she received a gift: a doll for her daughter, who was about to turn 4, and a Starbucks card. It came anonymously in “our last days in hospital.”

The coffee shop in the hospital is open day and night. It is one of the few places parents can go for a break, while still being close to their children. It was a special, thoughtful gift.

“It’s such a simple, tiny little thing,” Syme said. “Because it does get expensive, it does get dreary, or lonely, and it’s just someone random thinking about you, right?”

Even though everybody knew who the gift giver was, Becky “outed herself” after Abby’s death, hoping that someone will continue the tradition, said Melanie McBride, another heart mom at the service. McBride had been to the arena before. Eveson had arranged Christmas parties there for “heart kids” here so they could visit Santa in a controlled environment, and not worry about the germs at the mall.

After the floral arrangements were taken off the ice, there was skating, and a make-your-own-slime room with glitter and confetti. Slime was one of Abby’s favourite things. There was a room with singing and dancing, and an ice cream machine. On the ice, some of the younger children took tentative steps with a parent, their ankles bowed, smiling in disbelief.

This is what the Evesons wanted. A day for families to be together. They want to build an accessible playground in Abby’s memory someday. They believed in Abby, and they still do.

“It’s been overwhelming,” Becky said. “People aren’t just sending condolences. It’s messages of how she touched them, you know? And she’s 5. It’s amazing.”