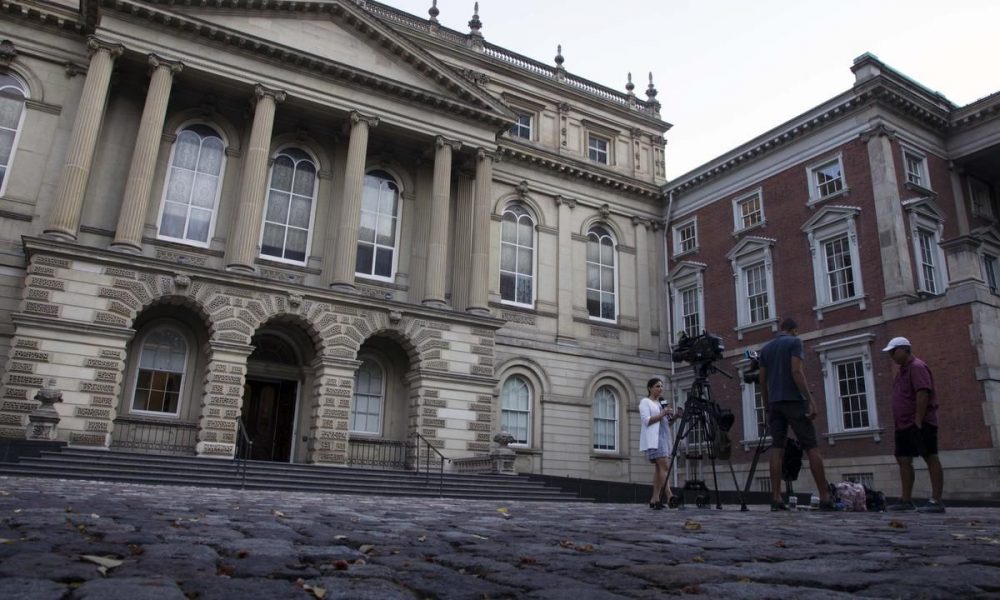 At the Ontario Court of Appeal at Osgoode Hall, there are only 12 lockers for female lawyers who must change into their robes before appearing in court.

There are about 70 lockers over on the men’s side, which has a lot more space and was once described in a legal publication as “opulent.”

“What it says is that ‘We think your numbers will continue to be limited,’” lawyer Lori Anne Thomas said of the cramped quarters in the women’s robing room. “It says ‘We don’t expect growth.’”

Yet numbers from the Law Society of Ontario, the province’s legal regulator, show that the profession is approaching a 50/50 split between male and female lawyers; about 57 per cent of lawyers are men and 43 per cent are women.

With that in mind, a Change.org petition that has already gathered more than 500 signatures is calling on the regulator to do something about the lack of space in the women’s robing room, which as recently as a few weeks ago was referred to as the “Lady Barristers” room on courthouse signs.

“Retire the Lady Barristers robing room in favour of a unisex space where the men’s robing room currently is located that can be accessed and used by all lawyers appearing at the 130 Queen St. W. courthouse.”

A spokesperson for the law society said the regulator is looking into it.

“We appreciate the concerns outlined in the petition about the women’s robing room at Osgoode Hall and we are looking into options,” said spokeswoman Sue Tonkin. “We’ll provide an update as soon as we are able.”

Canadian lawyers are required to wear black robes when appearing in superior courts and courts of appeal, such as at Osgoode Hall, which houses both the Court of Appeal and Divisional Court. The robes typically include a waistcoat and two white tabs worn at the neck.

In a 2018 piece in Canadian Lawyer magazine on the barriers faced by women working in criminal law, the changing room for men at Osgoode Hall is described as something out of an “old-money golf and country club.”

“The male change rooms are opulent and spacious with nearly 70 full-length lockers, benches, several mirrors and a spacious bathroom area. There is also a comfortable lounge section with a sofa and a large wooden table and chairs for writing any last-minute notes before appearing in court,” the piece said.

On the women’s side, there are some small benches and floral-print furniture near the lockers, as well as a sitting room with a small desk and a bathroom.

“When you compare (the men’s side) to the woman’s, the women’s literally looks like leftover furniture from someone’s grandmother,” Thomas said.

Needham, who said she was encouraged by the law society’s response to her petition, told the Star she’s never had access to a locker due to lack of space.

She said that ideally, there would be a communal space for networking and discussions at Osgoode Hall for all lawyers, in addition to private changing areas.

“It’s about more than just the space, it’s about access to informal mentoring, the conversations that go on in these robing rooms,” Needham said. “And our practice should be inclusive for non-binary individuals, LGBTQ lawyers, lawyers of all faiths and backgrounds, and these robing rooms — space issues aside — don’t address that.” 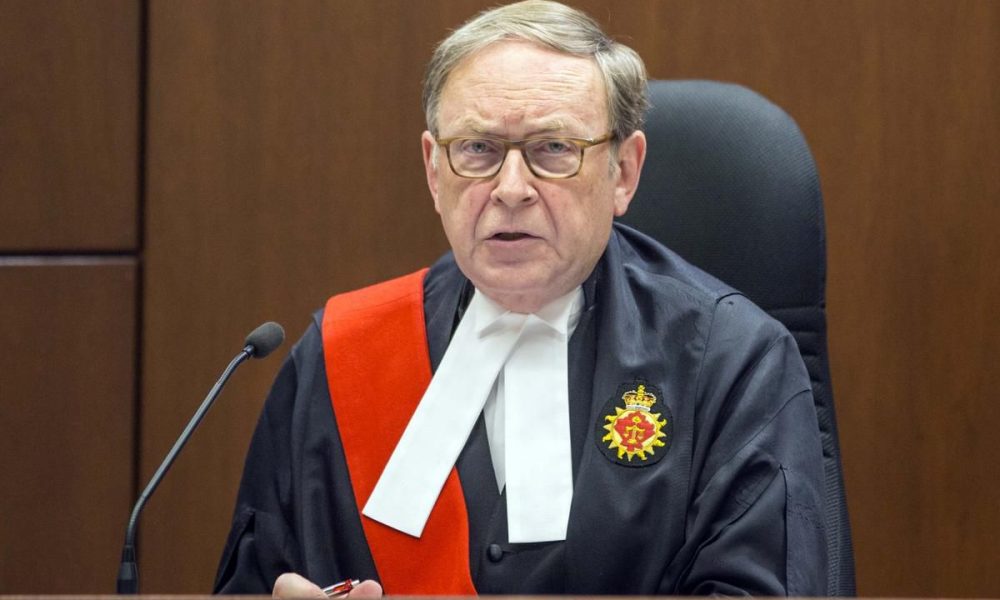 A senior judge blasted the provincial government Monday for failing to provide sufficient courtroom space in Brampton, which is leading to “very real and unacceptable delays” in the hearing of cases at one of the busiest courthouses in the country.

“The Ontario government — past and present — is either wilfully blind to the erosion of trust caused by its failure to take timely steps to address the facilities crisis in Brampton, or it believes that spending on this courthouse will not result in more votes,” Regional Senior Justice Peter Daley of the Superior Court of Justice said in court.

“Either way, the government’s inaction is unconscionable and inconsistent with its obligations to the public in Peel region.”

The Superior Court hears all civil cases, some family matters and the most serious criminal cases including murder. The lack of space in Brampton — located in one of the fastest-growing regions of the country — has meant that cases have had to be transferred to other municipalities including Milton, Kitchener and Toronto, leading to added delay and extra costs for litigants, Daley said.

“Transferring Brampton cases to other centres has a very real impact on the people who live and work in Peel region,” Daley said. “We have received letters of complaints from lawyers, members of the public and families of litigants who have been unable to attend these other court locations outside of Peel region by public transit, creating real access to justice obstacles.”

As of Nov. 1, the earliest date the court can offer to hear most motions in civil and family matters is eight months down the road, and 16 months for trials lasting more than five days, Daley said. For criminal matters, whether a short or long trial, the earliest date is 10 months from now.

Courts have come under heightened scrutiny to deal with criminal cases in a timely fashion since the 2016 Supreme Court of Canada decision in R v. Jordan set strict timelines to complete such cases before they must be tossed for violating an accused person’s constitutional right to a trial in a reasonable time.

In Superior Court, the time limit is 30 months between a person’s arrest and the anticipated conclusion of their trial. Daley said the court has had to reprioritize cases that would otherwise be at risk of being tossed.

Rarely have judges spoken so forcefully in public on challenges facing their court, but as Daley pointed out, the Superior Court had “engaged all the appropriate channels within the Ministry of the Attorney General to seek timely solutions to the pressing space demands,” but with little success.

(Daley also noted he had invited Attorney General Caroline Mulroney to send a representative to hear his remarks in court Monday, but the invitation was declined.)

In an unusual move, the judge even allowed cameras inside the courtroom to record his remarks prior to the start of the day’s proceedings, “in view of the broad public interest at stake in these issues.” He made clear he was only addressing problems facing the Superior Court and not the Ontario Court of Justice, the lower level of court that hears most criminal cases and also occupies space at the Brampton courthouse.

Compounding the spacing issue is the fact that a new six-floor addition under construction adjacent to the existing courthouse will be mostly empty once it’s completed. Daley said government would only be “fitting out” the basement and first two floors, leaving the remaining four floors a “vacant shell.”

Those first few floors were expected to be completed by now, but will only open around July 2019, Daley said. Even then, he said, no courtrooms will be completed, but only a few “retiring rooms” that could be temporarily used as judges’ chambers.

The judge urged government to approve funding for filling out the remaining four floors as soon as possible.

“It has become clearly evident to all … that the idea of only partially completing the courthouse addition is folly at its highest,” Daley said. “Not only does it not make any economic or practical sense to delay the completion of the remaining floors — this is simply further evidence of the provincial government’s continuing breach of its statutory and constitutional duty to provide appropriate courthouse facilities to this court.”

Daley’s comments were welcomed by legal organizations, who agreed the lack of space is causing serious access to justice issues.

“The long-standing practice of sending cases out of jurisdiction has created a number of obstacles for clients who must bear the costs associated with additional travel expenses and legal fees,” said Daniel Brown, a vice-president of the Criminal Lawyers’ Association. “This practice has also made it more challenging for both the Crown and defence to ensure important witnesses attend trial.”